I am almost certain that I have seen this topic before but I cannot find it again.

This concrete is new and is not wet. What could cause this discoloration and unevenness? I haven’t looked at it in person but a customer just shot me a picture asking my advice. As always, any help is greatly appreciated! 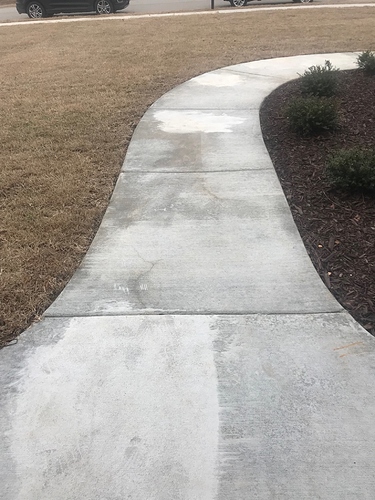 So, I found the thread I was thinking of that @Racer posted a link to a website that covers concrete discoloration. I would still like to hear anyone’s thoughts on the matter. The customer is a friend of mine that flips houses and this is on one of his properties so I’d like to help him out if possible. It looks like there is already some cracking so I’m thinking he is the victim of shoddy workmanship.

That’s terrible. Can’t tell from pic but looks like some smooth and some broom finished or they let water puddle in places.

If flipping, I’d wash it and stain it

At first glance I thought the same thing on the broom and smooth finish but it’s so inconsistent that I’m leaning towards poor workmanship or a bad batch. I may try to go look at it tomorrow to get better pictures and a better idea.

Hmm now there’s something I hadn’t even considered. I’ve never done any stain work other than personal wood projects so I’d need to study up for sure.

There’s nothing you can do about the cracking or discoloration. The term used by concrete finishers for this sidewalk would be, “it got away from the finisher” or “the finisher lost it”. Meaning, the concrete cured before it was properly finished.

You seem knowledgeable on this. Being that this is new concrete, would my friend have any recourse with the contractor that poured it? I’d assume premature cracking and horrible finishing is not what he wants his company to be known for but I’m not sure how common this is for concrete guys.

If it’s not that old and has issues your buddy should definitely have some recourse. Heck, even if it is a few years old they should take care of it. I have a couple buddies who own their own concrete companies and they would’ve torn it up and re-poured before the homeowner even noticed it. The finisher probably knew the same day that it was going to have issues.

Then again, if they’re shady it might turn into one of those deals where they blame the concrete supplier and the supplier blames the concrete guy. The concrete guy should have a good relationship with the local supplier so I’m sure they could figure it out together.

I couldn’t imagine walking away from a job knowing that it is not right. Some people’s values are seriously skewed. I’ll let him know that he should probably deal with them.

Doesn’t matter when it comes to cleaning though. With the right pressure and post treat it will look nice again - for a while

Just for clarity, and other new people - the rough bits hold water, the smooth bits don’t. That’s why the mould is only on the rough parts.