First post here this has stumped me. So i believe this is rubber from the rubber roof above it is very much not an organic matter. Does anyone know how to possible remove this. Solvents? I need something that will not damage the limestone. Thank you in advance. 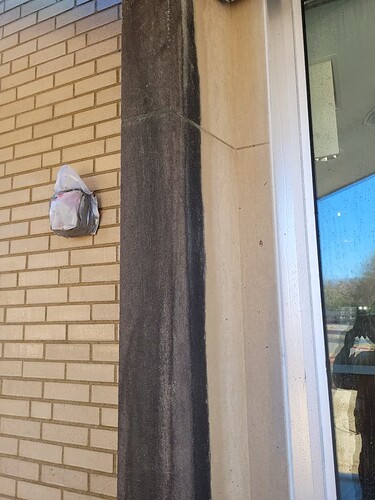 Got a better pic showing it in context, ie further away so we can see what’s above it

This is the best picture i have at the moment. 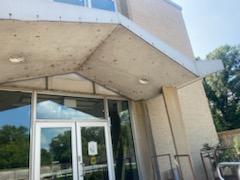 Sorry, It won’t let me enlarge it.

No problem do these help at all? 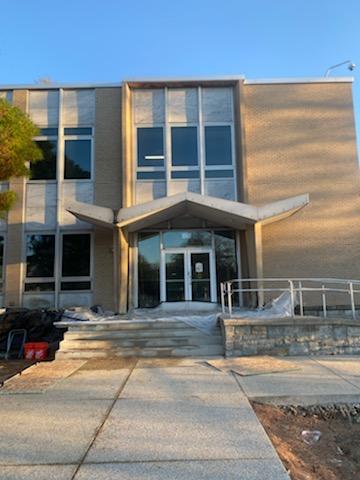 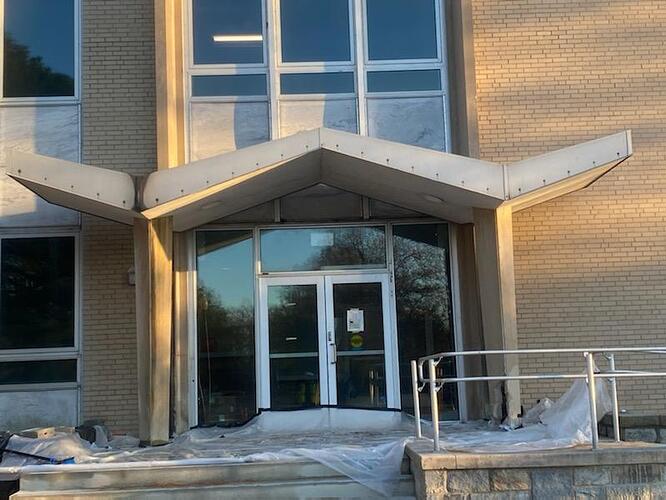 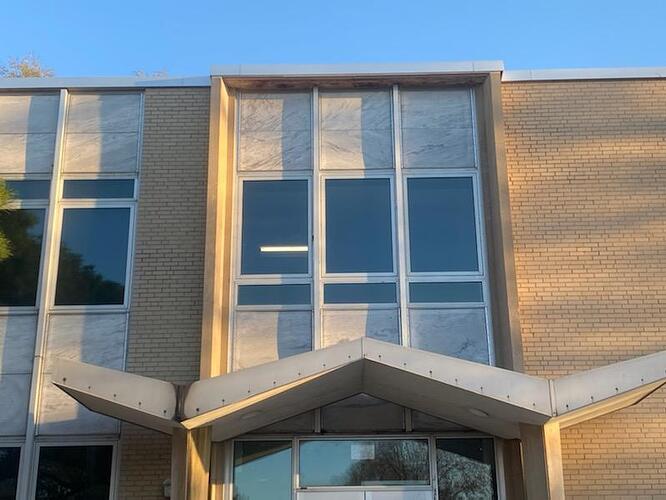 Have you looked up there? Do they actually have a black rubber roof or is it like a tar and gravel roof. I would think they’d be using like a white membrane. What have you tried on it?

It is a black rubber roof for sure. The only thing i have tried on it this far is hot water and 6% sh with a dwell time right around 15 minutes. Did not even lighten at all. It looks like someone attempted high pressure on it before i got to it.

stone is porous, you may need to try something else. Not being smart, but this forum is getting filled with people thinking SH is the cure all for everything.

Look, I’ve been around several rubber roofs, the black isn’t rubber (or EPDM to make some people feel better). The only way rubber would melt off that roof and run down the side is if someone hit it with a flame thrower and melted it. Regular rubber melts at 180c and silconized rubber is way higher like 400c or so. Now what happens on most roofs is this, crap piles up there because once it is installed no one pays any attention to it until it leaks. That crap builds and festers then overflows down the side of the building until someone says “dang, we better check the drains”. Now, the adhesive that some installers use to install those roofs have a different melt point, because some contractors cheap out on things to make more $$. That stuff could come down too(Not likely).

EDIT: additionally, people do stupid stuff like put driveway asphalt on roofs, or crack sealer. SOme of the stuff can take the heat and some can’t.

Always test chems in an inconspicuous location. Get the owner’s permission to “test”, unlesss they want to pay for a chemical analysis of the substance.

Look here for some possible answers

Your welcome and happy thanksgiving. Time to expand your chem lineup. I keep several of these chems on my trailer, because I deal with brick and/or stone at most houses.

I should also note that in some cases ecochem sells things like in strip or another adhesive remover. I sometimes get concrete that people glued rugs down on and have to clean. There is normally adhesive residue or hunks of adhesive left there. FOr stuff like this I use a miracle product called the “turbo nozzle”. It removes it.

The first thing people will say when you mention a turbo is it damages stuff. My question is always, why didn’t you back up? Start far away, move a little closer, examine, rinse and repeat. If substance comes off and there isn’t real damage, then you are a winner. The softer the stone the less likely this will work. Limestone unfortunately is a pretty soft stone. DO a test spot before going whole hog on it, if you want to give it a whirl. Use the lowest PSI turbo nozzle you can use. I would advise chems first, if you aren’t a “TURBO PRO”

Edit: TO do a test spot with a turbo, you need to shield the surrounding area, use an old stop sign with a hole in it or some other metal. You could use a board, but this isn’t optimal as it tends to get destroyed over time whereas a nice sheet of metal is portable and if lightweight enough can be taped up on higher places like stonework on sides of buildings. Pre wet the area (walls) around the are being turbo’d, because the splatter goes everywhere and is easier to clean up if it is already wet.

I agree. I’ve never seen a black rubber roof on anything and I’ve seen thousands. Seen a ton of the black tar and gravel and the white membrane. @Namrondatsnave have you climbed up there or gone inside and looked at? Have you tried scrubbing it any?

Thank you for the response! I have a very small variety of chemicals. im only a year and a half in business and thats only on weekends as of now. I do know that sh will not “clean” everything. Is there a possibility that the rubber has oxidized and with the roof drain being clogged its all oxidization combined with whatever is on the roof running down.
I say that because i stuck my hand on the roof and it turned my hand black. Unfortunately i did not get a picture while i was there. I have turned to a soft wash company owner and asked for his help in return ill pay him and give him free labor so i can learn from him. But im on here trying to figure it out because it is racking my brain lol. Also is it a possibility that it could be carbon? Its in a very over populated city and ive only worked with limestone twice before so im not aware of all of the chemicals that can be used on it. Just trying to do things correctly.

Thank you for the response. Yes i rubbed my hand across the roof and ended up with black on my hand. Unfortunately didnt think to take a picture. Scrubbed with a soft brissle brush nothing more because the run off started to erode the limestone. You can feel how pourus it is compared to the limestone not black in color. Did not want to damage it

We (You) need to know exactly what it is that’s causing, to determine how to clean. Is the gutter backed up, is the roof coating starting to break down, is it some type of caulking between overhang and building that could be causing, etc. There’s no need to clean it until the problem that’s causing it is fixed.

So take your ladder and get up there, see if you can figure it out. Take your hose with you in case you need to rinse it off to see and flush gutter. Take pics and report back

If you look at your pic, the black is coming off the valley. CHances are, without seeing it in detail, that there is a drain that is clogged on that roof ( or covered up). Here is the kicker, it may not have been designed with a drain, so who knows how long stuff sat up there. The black from the roof rubber, the petri dish of stuff sitting up there, and neglect over time caused it to build up, turn black, and leak down. As you can tell no one bothered with it until recently.

I have some rubber roof in my field that I use for covering tractor implements and stuff on my trailer over winter. Every time i touch it I get black hands. Just like grabbing a tire, tire is fine, just get black marks on your hand.

You may want to try poultice, pulling the stuff out rather than scrubbing it off or chemically removing it, if the stone is as soft as you are saying it is. Test in an inconspicuous area after you figure out what is going on with the water. This is a restoration job, not a simple clean, hope you charged accordingly. My first words to them would be I can’t remove it, but I can make it less noticable.

I appreciate you both very much i will report back with my findings when i am able to get back on site. Thank you!!

What you ran into here is one of those “fancy” architectual style roofs. Frank Lloyd Wright made some beautiful houses and buildings, but they are also well known for leaking roofs.

Did you remove any of it off the face of the roof? It looks like metal up there and should be the easiest to remove.

Looking forward to hearing how you tackled this. It is one of my favorite things about this forum, seeing oddball stuff and how people fixed it.

building code allows for 2 roof systems, one on top of the other…agree with previous comments that EPDM will not melt and cause this but something you all could see at some point would be an old coal tar pitch roof beneath a newer single ply membrane roof. Coal Tar Pitch just like they soak rail road ties in is the best waterproofing mankind has ever known, warm temps and sunshine melt it and it reseals itself daily. I have seen this leak out and run down walls many times.