Lights for pressure washing at night?

What are y’all using for light to pressure wash at night? I do a few commercial restaurants that have automatic lights and they will shut off on me in the middle of a job leaving it completely dark. I have a extra 12v battery that I thought of wiring up lights but figured it would drain that battery fast 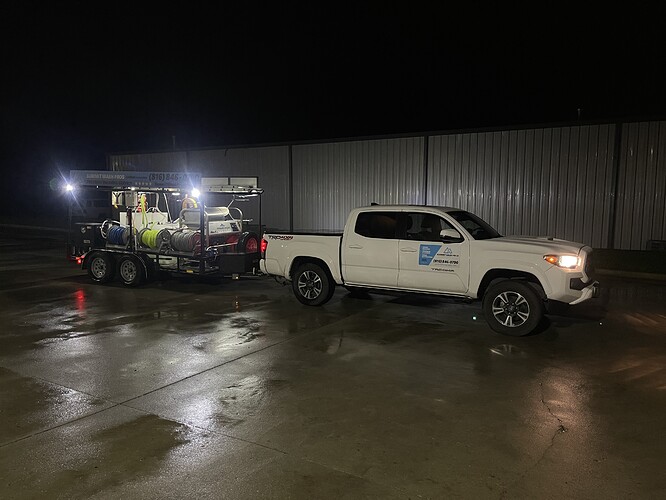 Just some 12v flood lights from Amazon and 2 led strip lights. I also put a wide angle light on the surface cleaner handle and sometimes wear a headlight

I’m highly impressed your V6 Taco can pull that rig.

still a work in progress

Only time it struggles are those steep on ramps to the highways but the MPH still climbs! It pulls fine on flat surfaces but going uphill and fighting head front winds it for sure gets a workout lol. 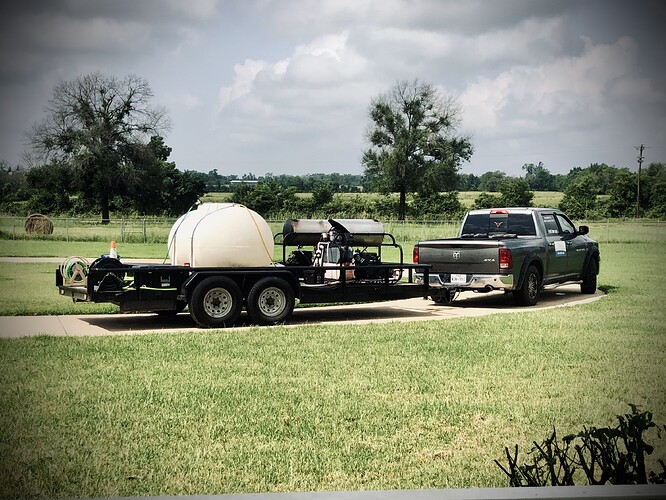 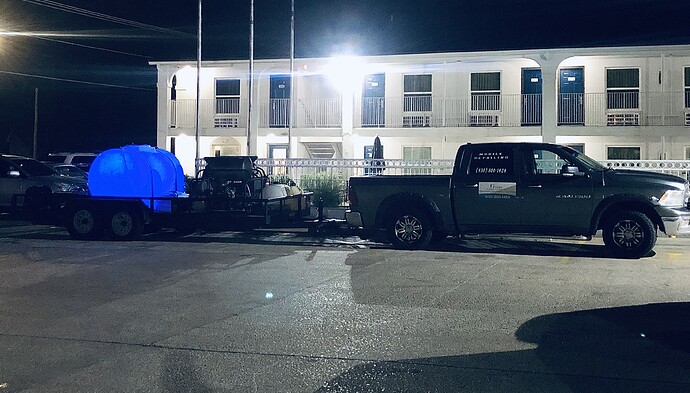 I’m in the same boat with my truck pulling my heavy duty trailer. That Hemi works like a champ but I can’t say the same for my suspension

Do you have a link for those 12v flood lights?

Wow that’s nice and bright! Good stuff, may have to look into it. Here’s the links

Now keep in mind these are 12v so probably no as bright as that 20v dewalt there but it gives me plenty of light to work with. I have 5 of them wired in parallel.

Yeah, for some reason Ram thinks trucks should have coil spring rear ends. And, theoretically, it’s a better design. When in actual use–not so much. That’s why Ram will always be city boy trucks. They look nice and ride great without a load on them. Put them to actual work and they fall apart just like everything else Chrysler/Fiat has made in the last 50 years. I’d get rid of that thing ASAP if I were you.

My Ram has never let me down and it works hard!

But i agree about the suspension. I had mine upgraded.

I’m thankful for my truck it is dependable. Hemi 5.7L

That hemi is a good motor no doubt. Once you get used to the horrible GDI ticking at least. No idea why Ram’s GDI tick is so much worse than everyone else’s but not a big deal really. Supposedly those newer Ram/Chrysler/Dodge 8 speed transmissions are very good too. Haven’t heard a whole lot of bad about them which is surprising given Chryslers history of putting out the worst transmissions for decades. My mom’s Grand Cherokee went through five transmissions before she finally decided to get rid of it. Luckily, she had purchased Chryslers lifetime warranty (that they no longer sell…wonder why?) so she was covered for all of those. My buddy’s garage door company runs all newer Ram 1500’s and all five have had at least one new rear end put in and the one 4x4 they have is on its second transfer case at 40k miles. The interiors are loud compared to a Chevy or Ford or Toyota. The body panels are much thinner or something because they get hail damage way easier than the other makes. Not to mention the new Ram’s are the most recalled truck in the U.S. last time I checked.

In the end, if you like it and you feel it is reliable then that is all that really matters.

Chrysler/Fiat has made in the last 50 years.

Oh man don’t get me started on Fiat! When I was kid in the 80’s my mom had a 70’s fiat. It was such a POS that when she finally replaced it with a 1986 Chevy spectrum it felt like we got a Bentley! I was like wow a radio, cloth seats and rear windows that rolled down! About 5 years ago my wife got the fiat 500e (or 300e can’t remember whatever little cheapie electric version was) was barely better than the one from the 70s lol

Oh man I’ve got a Fiat story. Had a guy come in wanting to Trade his Fiat 500 Abarth with all kinds of accessories and like 5000 miles for a truck he wanted. He owed WAYYYYYYYY more than it was worth and acted like I had kicked his dog when I gave him his trade offer. I tried explaining to him that western Oklahoma isn’t much of a Fiat market and that we’d probably end up sending his car to auction after it sat on the lot for six months. He wasn’t having it. He thought that car was worth it’s weight in gold. He left all upset and flipped us all off on his way off the lot.

My dodge has a tick and the dealer bought me a brand new motor in February. They had my motor rebuilt and it still came out with a tick so they bought me a new one. My truck is a 2011 with 155,000 miles on it. The tick is really loud and it still pulls like a champ! I haven’t had the time to get my new motor put in and the two weeks I downed everything to put it in the shop was just a cost of money. The shop didn’t even have the chance to touch it! I’m very surprised I haven’t had transmission issues yet at 150,000 miles and it’s 4X4. But then again I also baby it and don’t hammer the petal even when I’m pulling my trailer. I will never go back to Chevy or Ford after buying this hemi. Yea the suspension sucks but even Ford and Chevy have their cons! I’ll take that hemi with suspension problems over anything else!

Just upgrade the suspension then!

I’ve had 2 5.7 hemi’s and both developed a tick. Besides mine, I know of several that all had it, plus my dad owns a repair shop and has fixed a lot of them. It’s the exhaust manifold studs that break and cause a slight tick that usually is loud when cold then gets a bit quieter as it warms up. For about $100 is studs and gaskets you can fix them, but they are a pain to get to. Everyone I know of that ticked was this issue, nothing with the fuel injection.

Unless those studs are breaking on the train ride from the factory to the dealership lots then it’s definitely something to do with the GDI. I sold those trucks brand new and every single one you would fire up on the lot would tick.

I sold my brother a two door Jeep Wrangler that was slick. One owner, ultra low miles, probably $8000 in aftermarket accessories. I told him I would only sell him a Chrysler product if he bought the lifetime warranty to go along with it. So he did. The warranty was around $4500. It paid for itself the first time he put the jeep in the shop.

Yes that is a good investment