Hi,
I’m bidding on some flat work for a client and they’ve asked to quote on the roof as well.
Its a single storey Victorian home (about 150 years old) - the caretaker says the roof has never been cleaned - and I believe him (see photos). 2500sqf.
My plan of attack is as follows:

I wasn’t planning on running water through the pole, but will setting up either pencil of fan jets at 70 psi help in removing the amount of lichen on this roof?

Any tips would be appreciated. Thanks 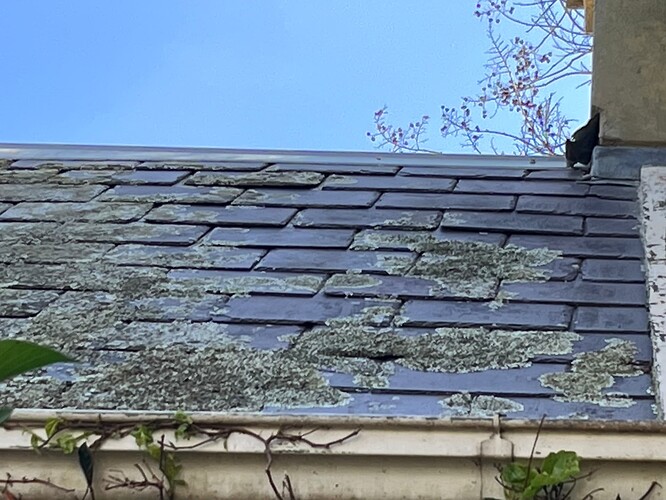 My first thought is are you financially able to replace a slate shingle if one happens to crack off.

I have insurance, but I don’t want to go there. Too far gone to clean off?, or i could just quote to do a soft wash only and recommend leave it all on there to come off with the rain.

Not a bad plan. Wet lightly, hit twice with at least a 4-5% mix with about 15min in between. Forget it for a week or two and then come back. Unless your water fed pole has a super stiff brush, you need something more like a concrete brush that you can scrap off some after your 2nd application. then like I said let sit for a couple of weeks and come back, hit again and see if you can get rest off. You still might not be able to get it all w/o pressure. Doesn’t matter what HO wants, they may have to wait awhile unless you want to get up there with a SC.

As racer said it doesn’t matter what the homeowner wants, they don’t know how any of this stuff works and tend to throw out silly ideas. I’m pretty sure after 150 years they would understand a few weeks or months for it to come right.

I would personally spray a 50:50 mix but with soap, you want some cling with a hot mix to keep it where it needs to be. Check up on it and repeat if needed. You don’t want to be messing around with Water-fed poles up on a ladder, some make it work some end up in hospital.

THere is a british guy on youtube that turbos hot water that stuff off their slate roofs. They use an extension pole and instead of a ladder they set up scaffolding. I have never seen a slate roof let alone cleaned on, i am just sharing what i have seen work on youtube.

With slate, you have to be careful with soap. Certain types of slate will change colors, depending where it’s from. The one in this pic looks like it might be ok, but should always test a spot and even then just use minimum surfactant. Being that it’s a shallow pitch, OP is probably right not to use any.

I hear ya, I’ve had zero issues with slate and soap, probably more to do with the type of soap used. Never really had a reason to not use it.

Golden info as usual! I’ve never worked a slate roof but changing colors would never have crossed my mind. I’d much rather learn from you experience than my mistakes. Thank you!

THere is a british guy on youtube that turbos hot water that stuff off their slate roofs.

I just found him - thanks!

All my research says to avoid soap - during my research there’s been a few guys on here that have talked about staining issues. I wouldn’t want to risk it for sure. I’ll definitely be clear with the owner around managing his expectations - especially as he’s let go for so long. That pic above is the side with the worst of it.

As racer said it doesn’t matter what the homeowner wants, they don’t know how any of this stuff works and tend to throw out silly ideas. I’m pretty sure after 150 years they would understand a few weeks or months for it to come right.

Me neither, think it depends on type and what part of country it’s from. I always test and even when good I use about a 1/3 of what I normally would. Have heard horror stories, whether they’re true or not, don’t want to find out the hard way, lol.

All I know is that when you put the sauce on one that’s dirty and has algae, there’s nothing slicker on this earth. Makes a metal roof feel like sandpaper

@Racer @MuscleMyHustle I’ve been thinking about how to quote for this over the last day…looking at the photo above - (that’s the worst side), two sides are half that and the others have the bottom edge covered in lichen (about three tiles in high running the length of the roof) - with that in mind - is it possible to hit this roof say two or three times - spaced over 4 - 6 weeks and just leave it up there for the elements to take care of over time? or is too far gone and will definitely require scraping to remove the bulk of what’s up there?

That’s so bad, I would plan on brushing the worst spots where the clumps are. That roof is so flat, may take awhile for it to come off on it’s on. Even then homeowner needs to be aware that after the lichen is gone, still probably going to be some stain marks no matter what you do.

- I will definitely outline that in the estimate.

is it possible to hit this roof say two or three times - spaced over 4 - 6 weeks and just leave it up there for the elements to take care of over time?

That’s how I would do it.

Thanks muscle, I’ve had a chat with the owner and I’ve explained the process and because of the amount of buildup it will likely need to be scraped off if the elements don’t take care of it after a few months. So I’m breaking the quote down into two parts - softwash x 3 hits at two week periods and if its still sitting there in 4 months, I’ll hit it again/scrape/rinse and do the gutters at the same time and he can pay the additional amount to do that part of it. I’ll post some photos here as I go along