I just borrowed one and I’m making ladder racks for the trailer. I appreciate it though… you really do love driving.

My insurance will only close the gap if there’s an amount owed or if their insurance company gives me less than what they would as I understand it. It’s $1000 deductible on a paid off truck.

Heck, wasn’t going to bring it to you lol. It’s at the shop if you need it though

your insurance will also consider it a claim against you even if it wasn’t your fault. If they have to get involved it is a checkmark. I know from experience. We had a semi truck hit a power pole and kill about 3/4 of the electronics and some wiring in our home about 6 years ago. Well the trucking company had to pay my insurance company back. Even though my insurance was $0 out of pocket they still dropped me 2 years later when the house was demolished by a hail storm. (state farm) 2 acts that I had no control over. SUCKS! I loved state farm.

Sorry that happened to you! I hate to say it but the medical, emotional and legal angle are the only way to get them to listen. I had a farm combine nearly kill me and a worker a few years ago, and nobody would listen to my claims until they received a letter about lost wages due to medical conditions that were just now appearing, and the emotional distress of not being able to ride my motorcycle because of the anxiety caused by the accident.

It didn’t hurt my case that an investigation revealed that that same farm had another accident earlier that year involving a light pole. The attorney used the word “negligence” in the demand letter and suddenly the insurance company was tripping all over themselves to write me a check.

Sucks to go that route but they will screw you if you do it without an attorney. It’s a small price to pay for them to represent you. 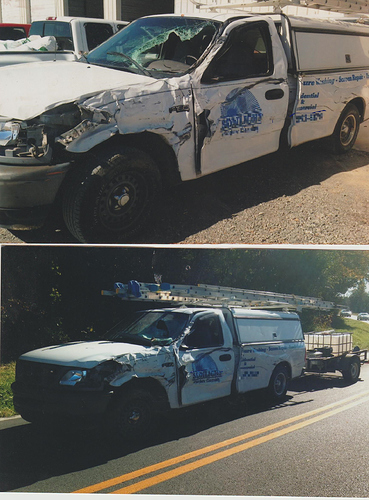 @squidskc I have Tundra Limited that you can use until you get something sorted out. My sister lives in KC so I can bring it to you and when your done with it leave it at her place and I can pick it up when I need it again. Send me a pm and we can make arrangements. I’m afraid you are in for a long battle unless you get an ambulance chaser involved as @Steve has experienced.

That’s bonkers though. Nothing of mine even touched theirs. It’s legitimately because I’ve become a thorn in their side.

@Steve that’s super bonkers dude… I’d be lying if I said I haven’t lost sleep, been emotionally and mentally drained by this, and near anxiety attacks. My chest has been tight for a week.

@Jetlag you’re the man dude. I appreciate it. I think I’ve got a truck for a few days before I have to start renting, but I’ll PM you anyway. That might be a good option for this upcoming week.

I’d be lying if I said I haven’t lost sleep, been emotionally and mentally drained by this, and near anxiety attacks. My chest has been tight for a week.

I was pretty shaken up since the combine ladder nearly decapitated me. I couldn’t ride my motorcycle for a couple of months because I kept thinking about what if? I still get on edge every fall when those metal monsters are roaming the highways.

You get in a huge bind and I’ll drive the beast over.

Sorry man, that really stinks. I had an incident similar a few years back. I was sitting still at a stop light when I was hit by a crane truck from a big company here. Truck was totaled and it caused some back damage that ended up finishing my framing career. But long story short they took 3 years to settle the case and for those 3 years I was left holding the bag, they know they have you stuck and everything takes weeks and weeks of being shuffled between departments. Most lawyers only want the injury cases because that is were the money is, I got a lawyer but they didn’t even want to deal with my truck, only the medical side. The insurance rented me a truck for 5 days, with which I wasn’t allowed to pull my trailer, and then told the rental company to start drafting out of my bank account, which they did! All the while my destroyed truck is sitting in the driveway with no calls returned. Even today it makes me mad too think about how they are allowed to treat you. I’m sorry you’re going through this, I feel your pain especially during the busy season. If you need to vent you can give me a call. 804-337-5616
Joe

@squidskc I talked with my sister earlier about your situation. She is a paralegal for an attorney in Montgomery Alabama. She told me to give you her number (I’ll PM you) and she said to give her a call and she would try to help you. Not sure if her attorney is licensed in KC but she said she would be glad to help in any way she could. She could definitely give you some legal advice if nothing else.

Update: I posted this in all the swap & shops I could last night and first thing this morning the rental company called. Weird. 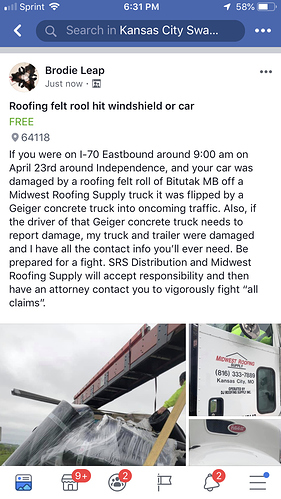 I moved out of my shop a month ago, but my landlord is letting me store a couple things there until he rents it. So no one really knows that.

Here’s a wild development. They took responsibility for the negligence. Then threaten to fight it. I posted that. Today, I got a call from the rental company which won’t allow me to tow with the truck so it’s worthless, but something is happening. I go to my shop in a mostly industrial strip where no one ever goes to chill in their car. Two people in business clothes just chilling in their car in front of my shop like they’re looking for someone.

I guess they’re tired of the DOT, EPA, OSHA complaints and blowing them up on social media they’re watching me and doing a lackluster job of it.

You know when you catch someone watching you and they try to look like they weren’t? That was these two idiots.

Maybe PI’s making sure your not going to claim that you are injured or something.

The worst PI’s ever. I think they were paralegals. Haha

Call the cops and tell them you see suspicious activity.
Then wait and enjoy

I’m staying one step ahead of them to include catching their paralegals turned spies, but found a firm to represent me. They don’t know that yet. But as of 15 minutes ago, I’m getting everything I asked for except the lost revenue. That’ll be between the attorneys.

Thanks everyone. I sincerely, truly, from the bottom of my heart appreciate this. THANK YOU! 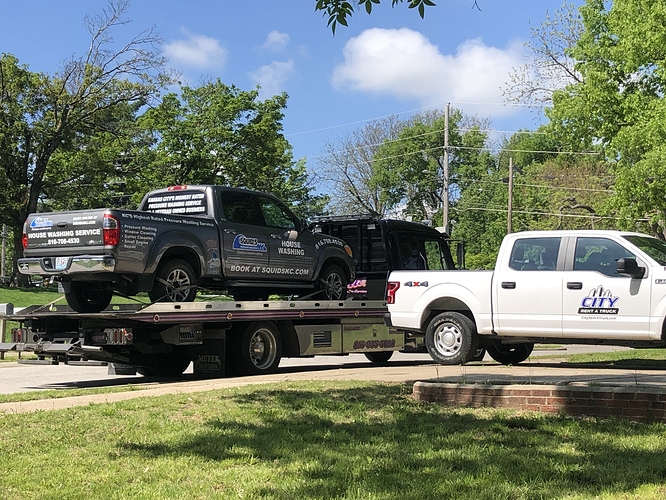 I just saw this. Sorry you had to go through all of that!