Just a friendly warning. It can happen

First off, I always walk around and tape anything I see that is questionable. Lights, outlets,garage door openers,doorbells,key holes,etc. I didn’t notice the gap at the top of the conduit. It wasn’t sealed. I don’t know if tape would have prevented it ( J-channel above) but water got in and fried the GFI. I had finished that part of the condo and had finished a side and the front and was packing up to leave. I walk around to pull tape and make sure I didn’t leave anything. I see smoke and smelled the burn. Crap! Called 911 to be safe. All is good but it bothered me. Owner was so happy I noticed it. I offered to pay for the electrician but the board president wouldn’t let me. Spoke to the property manager immediately upon leaving and he jokingly asked how the day went and if I burned anything down. He had just spoken to the board president. Sitting here drinking a beer and will be back at it in the morning. 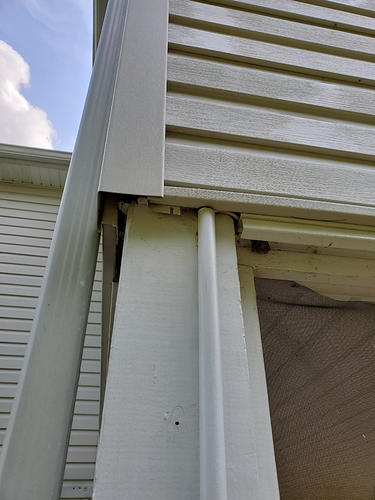 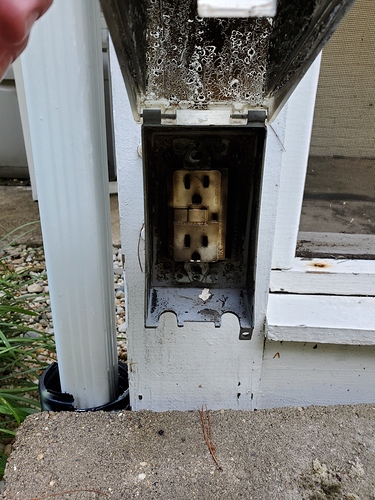 That’s a tough one to spot. You did the right thing. You earned the beer.

That’s a 1 in 1000 thing if you’re religious about taping everything else off.

I’ve run into two electrical issues this season. One was an old non-GFI recep on a brick wall. Covered it with a nitrile glove and tape and somehow still got it wet. Heard humming and immediately went and flipped the breaker. Homeowner had been delaying updating the recep for years. He understood but I’m glad I noticed it when I did.

The other was a brand new LED floodlight that the homeower had an electrician install a week before. Washed around it gently as always but as we were walking around noticed the bulbs flickering on and off. Flipped the breaker, took down the light, and noticed that it was installed with no gasket and water was able to sneak in.

No matter how careful you are, things do still happen.

Just fried an receptical outlet. I noticed the cover was not in tact so I taped it up. I didn’t realize the gasket was deteriorated and not sealed properly. Nothing major but it definitely started smoking. Turned off the main breaker. Alerted customer. Took off the cover and made sure no more fire. It happens. From now on I’m checking gaskets.

Happened to me last week. I always tape outlets and did this time as always. There was a small gap between the box and brick (faulty installation if you ask me) so I went overboard on the tape. When I was doing my final walk around and removing the tape I noticed something black on the tape and yep, it got the outlet. Homeowner would not let me pay for the repair although I tried and tried. He said he had been meaning to have it fixed and replaced anyway which makes me wonder if he’s had problems with it previously. Even when you do right things can still happen! I feel you man!

@Cougar_Bait I’m glad it wasn’t worse than that and great job playing it safe calling for backup. I’m not an electrician but that is a hack job of installing an exterior outlet. Any Romex installed on the exterior of a building should be run through waterproof conduit along the outside of the siding from the terminating outlet until it goes through the wall or directly into a junction box. That naked wire running behind the siding would be a nice surprise for someone doing some type of repair work. Thanks for the post, I’ll definitely be looking for that type of stuff from now on.

Some of the newer houses I’ve washed have a bead of clear silicone run around the base of lights and outlets where they meet the siding. I still tape them but I appreciate the attention to detail from the builder.

Same thing happened to me last year. An outlet box containing a GFI was not installed or sealed correctly on a stucco wall. Years or maybe months of water got into the box and rusted up the GFI so it wouldn’t trip when it got wet. We didn’t see it till it started smoking and popping. Home owner wasn’t home so I had to call to get a hidden key to get to breaker before the wall caught on fire. I was pissed. My guys could have got hurt because the home owner didn’t install or repair a faulty outlet. I wouldn’t pay for an electrician if he asked me. The outlet was not to code and definitely a homeowner modification from an original outlet.