Has anyone mounted one of these in the top of the buffer tank? I’m hoping a direct swap to replace the Hudson float valve using the same bulkhead is an option. Thanks in advance!

When you say top are you asking about the ceiling or on the side wall? I ask because you can mount them on the floor pointing up, any height of the sidewall but not the ceiling facing down. The Topaz would be the best option of the three.

I’ve been looking for another option from the hudson as the last two of mine have failed relatively quickly. And where i had it mounted was a pain to get to to fix it.

I appreciate it @dperez ! Looking for a ceiling mount option. Hudson valves are only rated for up to 100 psi. I think it doesn’t shut off 20% of the time around here because the water supply overpowers it. Some of the Jobe style valves are rated for 150 psi but I think I’ve spotted a winner today; Xtraflo 1 inch top entry. It’s rated for up to 175 psi & is rather cost effective. Made in New Zealand according to my research. Looks like a solid winner to me! 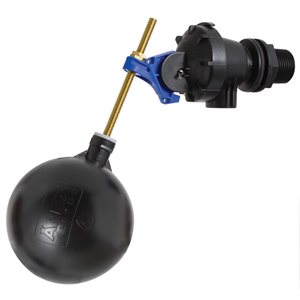 Are you sure this will work in the vertical mount position?

would an 90deg elbow or similar bring it to woek as its intended?

Yes, absolutely but the vertical leg would need to be long enough to allow room then you’ll have dead space that you can’t fill

We shall see. It’ll be here Friday. I’ll install it however I need to & keep the Hudson in place as a back up or for dual feed situations. I believe the arm can be turned around to put the float on the opposite side for a vertical ceiling mount. I can always bend or modify the arm if necessary to maximize tank capacity.

So as it turns out - the ‘arm’ is just a threaded rod, which is totally adjustable, bendable or replaceable with hardware store items. It can directly replace a Hudson valve using the same bulkhead. I’ll be positioning the ball directly under the lid of the buffer tank for max volume. Looking forward to taking it for a drive!

I hope it works out. I’m sick of hearing about all the issues with the Hudson valves!

Thanks dewd! I hope it does too… and thanks for all your input around here in general! You’re a very innovative fellow, especially for a rubber scrubber haha.

My rubber scrubbing days are over sadly. I’ve since moved on to work on another company PW Gadgets I’ve been working tons to design/engineer real SOLUTIONS to our most common problems while also intergrating more tech into our machines and chemical application methods. There’s a slight chance you might have been impressed looking at the very old and outdated control system that I had for fleet washing but the NEXT generation system will definitely tickle your fancy. I have a few projects in the pipeline before I start working on the next gen trigger gun controls but it’s coming soon enough. You can’t rush perfection lol

My rubber scrubbing days are over sadly.

Don’t be sad! I have 2 vehicles you’re welcome to wash every day if it makes you happy haha, but I totally understand. The entrepreneurial spirit keeps a fellow on the move for sure. Heck, I might just buy a drum set & start an ACDC cover band next week. You only live once.

If this works out for you I’m getting one. I usually don’t have issues with overfilling but it would save a few steps since I usually just let it run as I wash and if I glance over and it’s 2/3rds full and I’m over halfway done with the house I just walk over and shut it off.

It should work out fine unless it’s defective or something. I think I’m just going to get 2 hex nuts with washers & poke a new hole in top of the tank. That way I’ll eliminate a bulkhead & the install will be easier; just tighten the top nut & add a 1 inch x 3/4 barb elbow for the whip line. I love working those jobs where I don’t have to watch the tank. Finding 40 gallons of water in your 30 gallon buffer tank with water spewing 10 feet in the air from the vented cap isn’t much fun.

If possible, direct the float to the opposite side from the discharge so you don’t have water holding the float from rising to shut off position. Post some pics when you get it done

Yep, going through the top that’s the way it’ll sit (as pictured above). If it goes through the side, the discharge will shoot down. I need to get some 1 inch hex nuts on the way.

You have an ag store nearby? They probably have some

I just bought a Jobe for the side of my tank. I think the Hudson restricts flow. Not data to back it up but it just looks like it’s not flowing.

Not sure about the AG store but I’ll probably just order online & pull the lever back on the recliner. I recently worked a job in the boonies, I was getting about 2 gpm & the Hudson still overflowed if it had the opportunity (too much pressure, too little flow haha). I removed it on the spot & couldn’t tell any difference at all in the flow but it usually does fine.