Is my pressure washer beginning to fail? 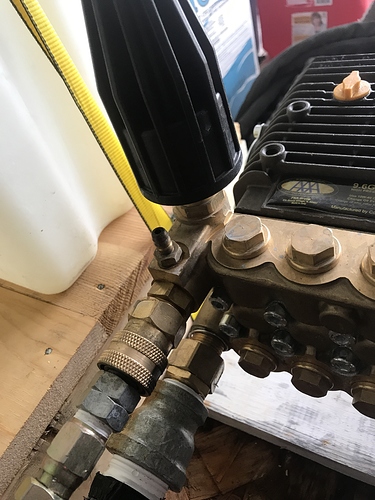 More experienced types will weigh in, but i would think it is just the built in injector failing, and not the pump.

If you aren’t using it, do what i did… unscrew the built in injector, and take it to Home Depot. In the plumbing department you will find a nipple with threads on each end that will fit that hole… get a threaded cap to go on top, and then it is completely blocked off. I did this because i am using an injector from Pressure Tek, and wanted to block off the built in injector completely.

If i can find my receipt, i will link to the actual items later. You can ask someone in the department, though, and they can probably find it if you cant.

Also, mine leaked the first time i put it on, because i didn’t have it sealed/tight enough. I took it off and sealed it the same way i seal all of my fittings (rectorseal tru-blu on the threads, and gas approved yellow teflon tape on top of that… both found at Home Depot), tightened it down good, and it stopped leaking.

Whoops didnt see that post before i posted. Yeah. Do that.

Whoops didnt see that post before i posted. Yeah. Do that.

Well I appreciate you going in depth and explaining how to do so. I will do that thank you very much.