So I’ve been doing mostly surface cleaning for a while now, and joined HomeAdvisor to help generate more business. It seems like most of the leads I’m getting are for house washing and now driveway / commercial parking lots. I’ve never done houses but if I can expand my business and make a good profit doing so, then its worth looking into.

I guess this kind of goes into pricing in general. The guy I bought my trailer from was upgrading to a larger trailer, more pumps etc. He does an area about an hour or so north of me, but he was telling me he charges .35sqft flat and .45 for vertical. Seemed like an honest guy and really hooked me up on the trailer, but I’m taking his advice with a grain of salt as he is a competitor. I’m in the Dallas area, does anyone have any idea what normal rates are in my area? Or how to find out without wasting someones time to get a fake quote?

Also, for house washing, is there anything I need to know or avoid doing so I dont put myself in a bad spot? Tips, tricks, etc?

Before i even knew i was getting into p.w. i asked a guy doing a driveway how much he charged to do one, told me the price and i may have asked for a card. Simple way to know, also check the money saver magazines you get in the mail, usually p.w. companies will post their cheap sqft charge.

It seems like EVERYONE in my area advertises “Driveways starting at $139, houses starting at $179” but it doesn’t say how may sqft that covers. I’m so tempted to call a few companies and tell them my home dimensions and get a phone quote. But I wouldn’t want a competitor to do that to me, so I cant find it in me to do that.

That just seems awful low compared to almost everything else im seeing online. I know my market will be different, but from what I’m seeing .20-.30 seems average for flat surface, and anywhere from .40-.90 for vertical.

Sometimes people like to embellish what they’re actually getting. One way to find out. Once you get out there bidding on some jobs come back and give us a Dallas report. I think you’ll find that SPC probably not far off the mark. 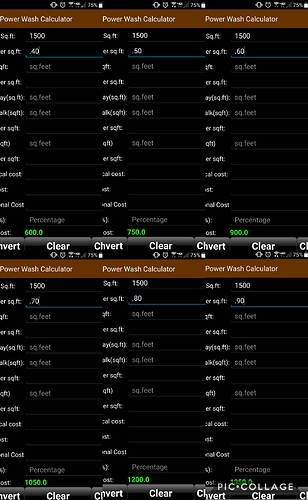 I used 1500 sqft bc that’s what my prices are based on being the smallest house around me. If I gave them prices to any customers for just a house wash around my area they’d tell me not no but heck no.

Damn, I 'd like to get some of that action. LOL.

I know right! IDK where he is located but maybe we should move there. For me 1500sqft=$190

They have for all services. I find that most the time they’re a little optimistic. Ok that makes a lot more sense. The guy I got my trailer from inflated the prices so I would price myself above him and not take his business. I was about to go do a quote on washing a house (2 story @ average of 10ft / story, 180ish ft perimeter = 3,600 sqft) at $.45 per sqft at $1620. Thats the whole reason I started this post because that seems really high.

Post pic and I’ll give you an idea what it would go for here. Probably similar.

Well according to that website, my pricing isnt that far off… The concrete driveway is almost double what I would charge for a 1000sqft driveway at .37-.46 (I currently charge .25), and house cleaning is a little cheaper at $.27-34
. 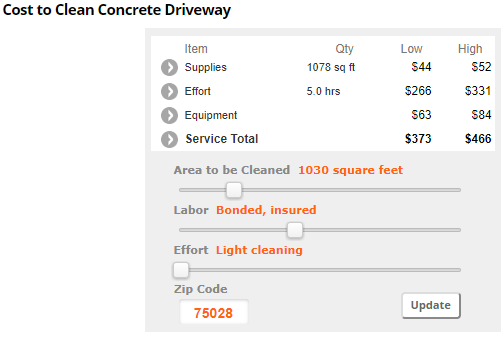 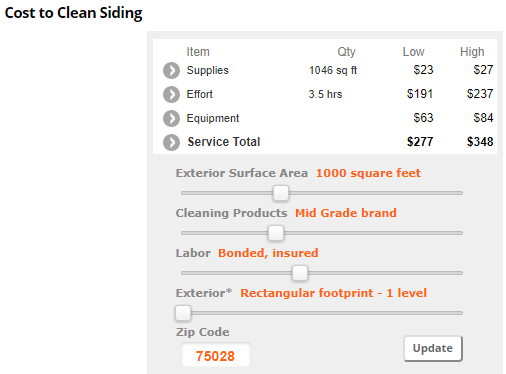 Guess yall should pack your stuff up and move?

Here is the house I’m going to estimate on Sunday. gotta love google maps. I miscounted something and its actually more than i originally thought… 230ft perimeter, 2 story @ 10ft a story is 4600. According to that site .30 seems about average. so $1380 to wash this house. 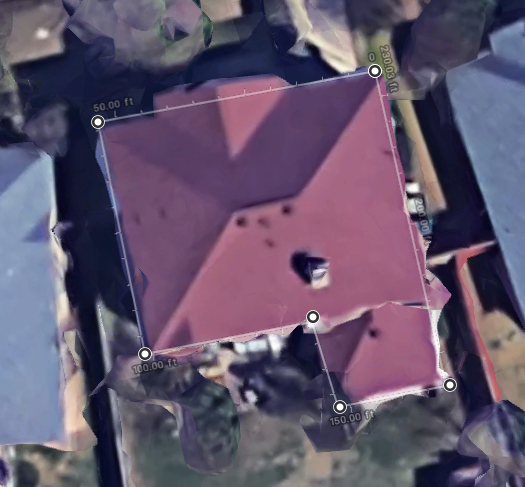 If you presented that quote in my area, for that house…they would call the police and have you escorted off the property.

That would be around $700 here unless there’s something funky going on in back that I can’t see. Would be 2.5 hours tops.

I honestly feel the same way JimLuke. If I were the homeowner and someone quoted me that I’d kick them off my property. I feel like all the info I’m finding is similar in pricing too. I am a very honest person (can be a good thing, and a bad thing in sales) and I guess just dont feel comfortable giving someone that price. I’m pretty lost on what I should charge…

I was thinking something like that as well Racer… 700-800

I want my business to be successful. I want to do it honestly, and provide excellent and affordable work. But I also don’t want to price myself drastically lower than my competition to where I’m doing double the work to make the same amount as them. Again, I’m just lost and unsure of myself when it comes to pricing.