I upgraded this year to the electric hannay reel for my hp hose. I have since had two new flextral hoses break which I had the same hose for 3 years and it never broke. I don’t know if it’s from rubbing on the back part of the frame. Any advice? also a few times the hose got loose and then had slack in the hose which made it a nightmare to untangle. Should I put the pin lock on it during use as it the pulsating maybe is doing this? 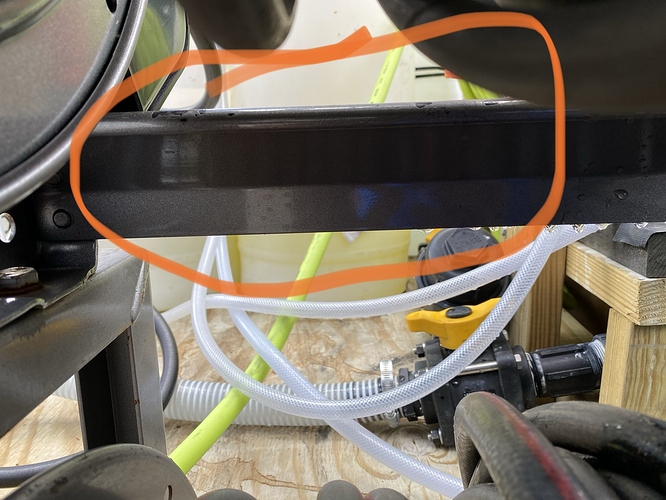 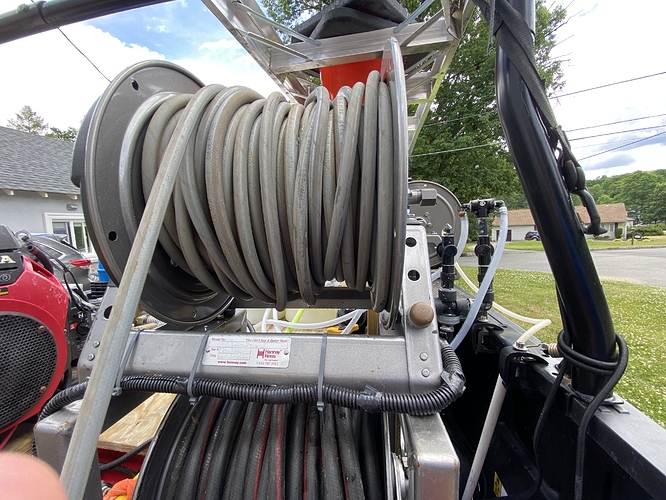 If it’s rubbing on that area take a piece of larger rubber hose, slit it lengthwise, and zip tie it over the lip of the frame. That should keep it protected.

What he said, and always lock the pin when washing

The 12v hannays don’t have a locking pin, at least ours don’t

Need to roll your hoses better.

Make sure you stretch your hose out some before you roll it up, otherwise you can get some tight kinks when rolling it up, that you have to stop and straighten out, but that really stresses the hose and can cause the wire to break.

If you’re getting a lot of pulsing either fix it or get a clamp or one of those rubber tie wrap thingies and attach hose to rail of trailer, just a little tension, that should keep you hose from getting loose.

Should have bot a Titan, lol.

I’ve tried the partial unroll of about 100ft out of 200ft and locked reel, but it still pulsed itself almost into a birdsnest. I found that locking reel coupled with a rubber bungee to hold down hose right where it comes off reel is what works. The hose cant loosen itself by reversing the wind due to slack.

Does anyone know a way to make a DIY lock for this reel. I’m still having the issues of getting the birdsnest of hose by the end of washing a house.

Buy the heavy-duty Hannay Hose Reel Lock 9965.0030 from QSpray.com, including mounting nuts and bolts. Order parts and accessories for your equipment today!

I have a lock on my non electric hannay, and if I don’t do what I believe @dcbrock said I still have a birds nest that is tough to clear.

I believe he is the one that said to attach the hose with a spring clamp to the side of the reel. Once I tried it I never got another nest. @Redjess suggested a bungee, which would likely do the same thing.

When I roll it up, I am following racer’s recomendation to have a clean wet rag in my guide hand on the hose while reeling it in with my other hand.

The clamp thing works, problem is the flimsy Titan lock bends easily and I end up having to pound it back into shape.

While we are talking about electric Hannay’s. I’m going to wire mine up this weekend but have a question about the leads coming off the motor. How do you know which lead is the ground and which is the positive? There aren’t any markings on the motor casing and I can’t find anything on the wiring diagrams. I apologize in advance if I’m missing something super simple here.