Hope you sydney based aussies are ok

the news says the rain is supposed to let up, hope everyone is ok. That is a crazy amount of rain you have received. The news never gives details like this area might be low lying and prone to flooding. We have areas which are on flood plains, but people keep building and rebuilding there.

Stole it from Kalifornia.

Talk to us @AUSSIE what’s going on over there? Seems like the last few years you’ve had everything thrown at you. Hopefully the Northern Territory is ok and friends and family in Sydney.

Bull Sharks instinctively head upstream in floods looking for an easy feed. This one found a Sydney railway station for a look. 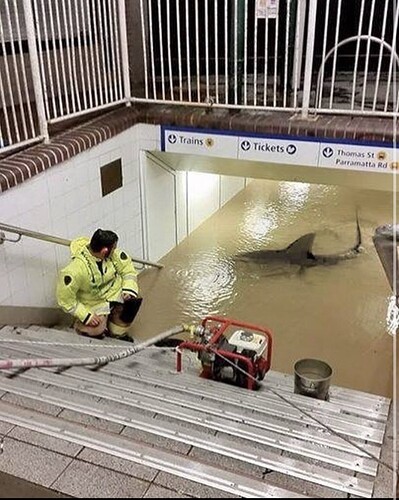 I had shark steaks before in a lemon butter sauce, they were pretty tasty. I don’t know if all kinds of them are as edible or if they get tough etc.

Yeah, between the previous rains, then the crazy insect and rodent issue, it is almost biblical according to the news I read.