Help, cannot get pressure to pump from tank

I’m very stumped. Tonite, I finished the plumbing for my small buffer tank to my 4gpm belt driven pressure washer. Itso only a 35 gallon water tank, has 1 1/4 bulkhead with a reducer to a 1 inch hose about 4-5ft worth with a filter , then it reduces to 3/4" for the remaining 2 ft of hose that goes to the machine. Maybe I’m doing something wrong, but when I turn the water source on, the tank fills, I open the valve at the bulkhead, water flows to the pressure washer. but with the pressure washer off, I squeeze the trigger and no water comes out. Nothing. Shouldn’t the water be coming out even with the machine off just like if it was hooked up to straight water spigot??
The tank sat almost level with the machine at first but then I put the machine on the ground to try again (made tank about 15 inches higher) and still nothing.
Please , any suggestions would be greatly appreciated

Make sure your unloader isn’t installed backwards.
There’s arrows showing which way the water should flow.

I did, I had a filter backwards at first, corrected it, checked all the fittings

Try starting it. You may have to get it to pull the water at first. If the water still doesn’t come, turn it back off immediately.

I tried that too, after not seeing anything come out , I thought maybe I had to turn it on for a second with trigger squeezed. Went against the grain tho, no water and turn it on , ugh, but I did it anyway, after approximately 2 seconds, I turned it off, no water would come out

take a garden hose and hook it up to the machine ( like normal)…You’re going to have to narrow the problem down.(process of elimination)

I did this too, began to wonder if my machine was messing up. Hooked hose to machine, squeezed trigger, plenty of water coming out like normal.
I’ve concluded it’s somewhere after the tank, in that plumbing, but doNt understand where or how. Maybe not enough pressure built to run thru the pump?

so frustrated, keep the ideas coming guys, hopefully we can figure this out

did you fill the buffer tank 90% full and see what happens ?

I filled it as much as the Hudson float valve would allow, approximately 30 gallons

Yes, I’ll do that here soon, by the way this is my first ever tank set up so be kind!

between YouTube, here, and 3 different parts stores I got what I thought I needed 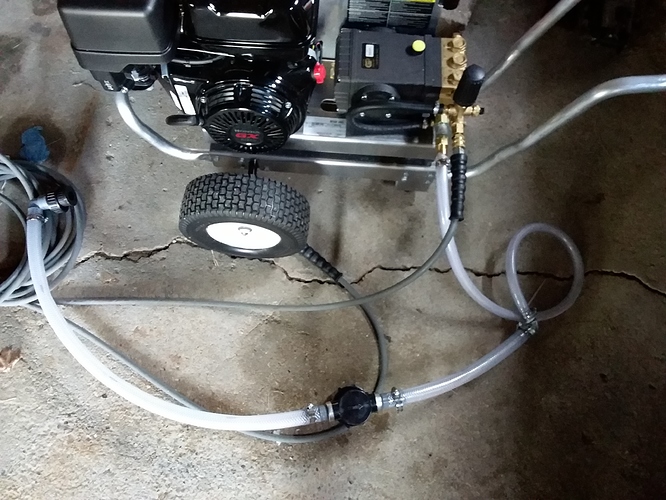 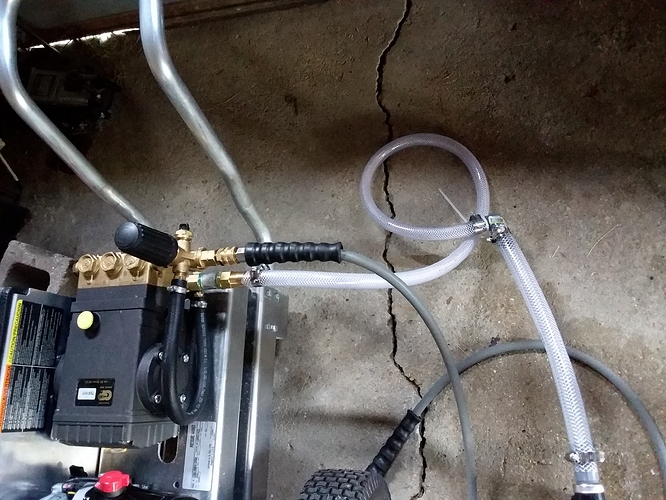 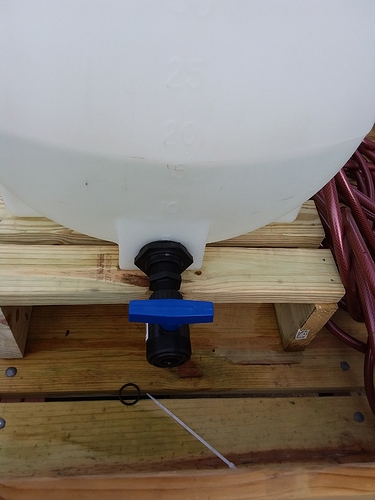 It’s separated at the moment, but that’s pretty much it, garden hose goes to some temp plumbing at top of tank, fills up fine

the unloader is the part with the black handle on it, that can be turned right or left.There’s an arrow on that directing which way the water is supposed to flow. The arrow should point out to the direction where the gun is located .

Yes, I checked that too, it can be adjusted but arrows are pointing in correct direction. However , the bypass hose, that curves around the pump hasn’t been touched, in maNY videos I see the bypass hose running back to the tank. I do not have that happening right now, but would that create this problem?

What do you mean? The black hose?

this is a thermal release valve
http://www.powerwash.com/164-thermoshield-thermal-relief-valve-1-2-inch.html