About to order parts from Pressure Tek to build the swivel and ball valve from Racer’s video below. @Racer that is your video, right?

He mentions using the Hansen couple for the end that gets used a lot. Can you guys explain a little bit between Pressure Tek’s “imported high quality” couplers and the “Hansen” brand couplers?

I appreciate any advice you guys can give me before I place my order. Also ordering a few other things. I currently have the imported QD’s in my cart, but wondering if I should switch some of them to Hansen.

Also, do you guys have opinions on stainless steel lances versus the zinc plated lances? 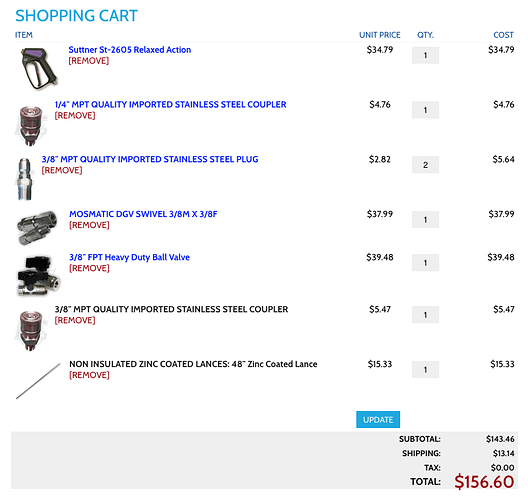 Stainless will last longer than zink. I get zink cause they are cheaper and my guys lose stuff. Most hoses come with a swivel on the end of the hose. I have had the mosmatic style swivels fail. I don’t trust them. If you are soft washing you don’t really need a swivel. The coupling will twist at the gun if needed. I’d suggest buying multiples of anything you get. I don’t use stanless couplers.

I’m still using the 50’ hose that came with my pressure washer, and there is no swivel. I don’t think I’ll buy more pressure hose until I get a trailer and have a place for hose reels. I do switch back and forth between my gun and surface cleaner though. Each time I have to go shut off the pressure washer. Shut off the water. Switch the attachments. Turn the water back on. Then start up the pressure washer again.

Do you have other suggestions I could look into for eliminating that process?

The Ball valve will take care of having to shut everything down to change out. My ball valve is on the end of my hose where it stays

I can think of no reason to ever shut down the machine unless you are done lol. Get s surface cleaner that will plug into your trigger gun. I can’t think of a reason for a ball valve but I’m in the minority on that. Use what makes you more efficient. Go to the 50 sec mark

I currently have this surface cleaner. I don’t know if I could modify it, but I certainly do not want to purchase another one right now.

Thanks for the video though. That’s helpful for me to see your gun. It looks like a lot of people don’t have the quick disconnect on the outlet side of the gun and that’s something I wanted to do so I can change from a short lance to a longer one without needed multiple trigger guns.

You can rig up the one you have but at the end of the day you would still be stuck with a hammerhead.

You can try that one and see how it works for you. Because I use my ball valve so much, I find the Hanson one seems to hold up better, doesn’t get stuck or as hard to use. And most of mine aren’t Hanson, but as I replace generally spend the few dollars more to get. But many people use that one and it works for them. When they’re new, you won’t notice much difference, but after you use a month or so you may. I’ve only replaced my Hanson coupler once in past 2 years.

Racer has a good point. He uses Hanson and has replaced it once in two years. We change a couple a day. Least little tension and my guys will put another on. I’m ok with it because I buy cheap ones. If I worked by myself I’d buy better quality and make them last. Nature of the beast. I take the ones the guys take off, throw them back in the new bin and they use them again thinking they are new.

ROFLOL. I love it.

I also love the ball valve for when I’m tired up for a minute and need to be flowing water for the pumps sake. I’ll crack it open and let it flow. I’m running 4GPM from customer supply. Their yard can take the water.