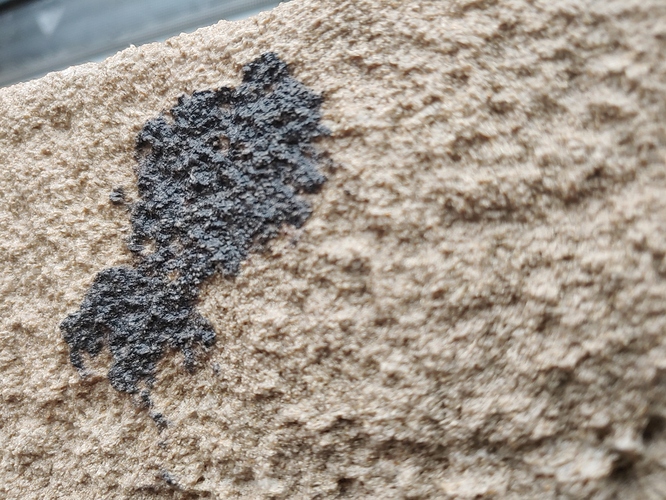 See and this is why Medics never run out of things to do. Dont lick mystery substances…

Hit it with some pressure. You’ll know straight away if you need chemicals.

Zooming in on it, it looks like it’s absorbed it. 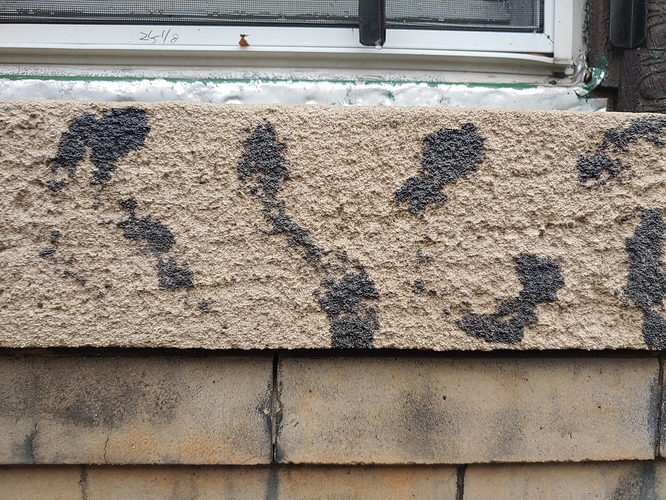 It almost looks like someone patched the stucco and it hasn’t been painted yet. Pictures can be deceiving though.

How long have the current owners been in the house? What do they know about it?

Definitely not stucco, it’s some sort of decorative concrete.
All people in the building are tenants and management has no idea what it is.

That same theory can be used on concrete. I looks the concrete was previously painted an someone tried to patch it. Just a guess though.

As with any stain you just have to try different chems. If you think the stain is organic use SH. If it’s rust use an acid. Oil or grease try a degreaser. If it’s paint try a graffiti remover or a solvent. I know you said you already tried acetone. I would imagine acetone would take up grease or oil too. Maybe dump some on a white rag and see if you get any staining on the rag from it. If nothing I’d just tell them to call a painter.

this is why Medics never run out of things to do

If it was graffiti where someone had tagged something id assume they used some type of aerosal can to spray it on. It kind of looks like the stuff people use to spray their bed liner with. Or maybe not, I dunno. Try a degreaser and some water if you have it.

Post I wider picture could be from something close by

That same theory can be used on concrete. I looks the concrete was previously painted an someone tried to patch it. Just a guess though.

If it was graffiti where someone had tagged something id assume they used some type of aerosal can to spray it on.

Sand blast with walnut shells so you dont damage the concrete under it. Make sure you tell customers that its going to leave a shadow

Someone on here mentioned about some awesome graffiti removal. I think it was @Ecowashpressurewash . I’ll try and dig the thread up. Not sure if it’ll work but worth a shot.

You actually posted in that same thread. Sounds like you usually have great success with Taginator. I’m sure the Taginator works just as well as the other stuff mentioned in this older thread.

Ok I use their product with a chem sprayer but it wouldn’t get into The pours of the bricks what am I doing wrong? [image]

It can work magic, the blue paint lower down came off with 1 application

As far as I know it’s been there a while. Bank inspection is coming up so they need it gone ASAP