I’m sure this post will receive some support and also some pushback. I am by no means a financial advisor, this is not financial advice, and the only goal of this post is to hopefully spark someone to do their own research on the matter and make an educated decision.

With that said, I am sure most of you saw/heard of these so called “Meme Stocks” and the massive runs these stocks have had previously. The long story short, is that large hedge funds and other market makers got greedy and got caught over shorting these stocks. Both have had small runs before due to some short sellers buying back and covering. With that said AMC recently hit the highest level of short selling the company has ever seen and GME has continued to be shorted heavily and it seems both may be priming for their next (hopefully final) launch. I’ve been buying and holding both since Jan of 2021. If you research the Volkswagen and Tesla short squeezes you can then begin to grasp the possible heights both stocks could reach. I personally think we’re already in a recession and it will continue to get worse as defaults increase and rates rise. Example: in 2018 and 2019 combined there were roughly 18 million repo’s and within the first 6 months of 2022 there have already been 22 million. The reason I bring this up is that I believe owning AMC & GME will be a hedge against a recession as they will both run as the economy worsens. This is my opinion and purely speculative. There is a huge amount of info on both these stocks and why/how short squeezes occur. So if this does peak someone’s interest I implore you to do your own research on both sides of these stocks and make a decision for yourself. I personally think both will go minimum 10X of where they are currently trading at. I have no idea when they may run but will be very excited when they do. Hope everyone has a great Monday, feel free to comment or ask questions!

I think you’re an idiot with zero knowledge or understanding of the financial markets and how they work. Please stop giving out ridiculous financial advice, someone’s going to think you’re smart and follow your advice and lose alot of money. GME and AMC are pump and dump schemes - that is all you have to know, it is not investing, it is gambling.

No worries that’s your opinion. And I have mine. Mind me asking why you dislike both? I understand what a pump and dump is, shoot most new crypto startups these days are. But I wouldn’t put AMC & GME in the pump & dump category. Their short interest is very high, nearly half of all Gamestop shares are DRS’d and locked up, AMC is becoming more and more profitable as time goes on. Plus on top of all that the Failure to Deliver’s have been racking up and even compared to some of the other top trading stocks they’re exceptionally high. It’s okay to disagree with me but calling me an idiot seems a bit short sighted and rude. 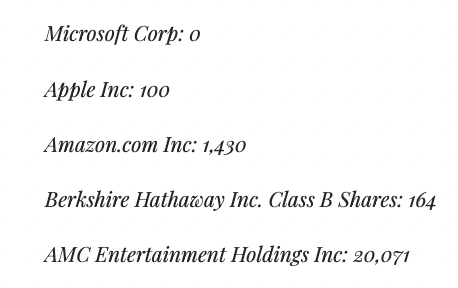 Dude, you had plenty of chances to sell. The short float on AMC is less than 20%. that’s nothing. Plus they’re 5.5 billion in debt.

Gme short float is only about 20% but at least they were smart enough to sell a bunch of stock when price spiked so at least they have some cash but so far they haven’t found a business where they turn a profit.

I very well could be wrong, only time will tell. I respect both of ya’ll quite a bit and had no ill intentions by the post.

None taken, I’m a very active trader. Have been for over 40+ years. That’s my background.

I had no idea! I’ve dabbled since meeting a buddy who was a scalper at my last base and after learning about the 08 mbs fiasco, I got hooked!

Racer what’s your opinion/prediction on how the housing market, car market, and overall economy is going to play out over the next 6-24 months? I’m genuinly curious as I was too young to fully understand and be aware of the last recession in 08

LOL, who knows. Everyone has an opinion. I think oil and gas good long term buys, think the market in general has more correction to make. Housing market is hard to tell because a lot of that is regional and local. I think the car market is going to make pretty big decline, especially if employment starts falling off. A lot of people spent stupid money past year or so buying gas guzzlers. Just read a report last night that repos are already starting to increase the past couple of months.
Even WMT just came out after market close today lowering expectations, saying they’re seeing people cut back on shopping for everything except groceries. They’re down over 10 pts right now in after hours trading.

Can’t wait to see where the car market goes when the time goes for me to buy a car. Hopefully prime rates aren’t ridiculously high if I end up having to finance though.

Auto Loan Bubble About to Burst A pair of excellent Tweet threads explain what is happing with car prices and pending repossessions.   Worst Time to Buy in 30

Yep its looking pretty crazy on the auto side, I’ve been a Consignment Manager with Camping World this past year and was in RV sales since 2020. The approval rate was insane last year and some of the campers I was trying to buy once I got into Consignments, were 115-120%LTV. There were so many ‘covid ballers’ that had large down payments but really couldn’t afford payment.

I do know that I think everyone should be real cautious about taking on any new debt right now, between the economy and the political situation. Seems like most the country has gone wacko and if stupidity was worth anything there would be a whole lot more billionaires.

Hope your job secure. Just saw another report that that market was falling off big time too.

We saved up to buy all of our equipment and trailer outright, but it does make me nervous trying to start my first small business right now. In RV/Car sales unfortunately the only consistency is constant change. One of the reasons I’m trying to get out of it.

If you have it saved up, might as well. I’m taking on about $5,000 of debt in terms of equipment and trailer and still think it’s worth doing more than not.

I bought everything slowly over this past spring, we’re about to start trying to find work!

Looks amazing. Going to build start building my trailer with my 6.5GPM setup in around 3 weeks. Good luck to you!

Idiot was a bit harsh, it was 7am here. Still stands until further notice unfortunately. I don’t like or dislike these stocks they just have no fundamentals attached to them GME had no business hitting $81 last year, at some point the basic math of these company’s has to matter. In the current market and type of people getting into these things it’s all hype and of thinking that stocks only go up completely ignoring that there’s a business behind these stock prices and they have to correlate to be of value. GME is definitely not one of them. Earnings are out this weeks for many of the top company’s, pay attention to forecasts and guidance it will tell you a lot about where things are headed.

Nice looking setup. Where you located/