I need some EBC for a job that we will be taking care of this friday morning. Is there any chain stores that you guys know of that carry it? Ive heard sherwin williams i believe?

I called my local Sherwin Williams and they had never heard of it. I did read though that they have the option to order it for you, but you have to ask them because basically none of them stock it and most don’t even know they can order it.

I called EBC directly and they were super helpful and told me where I could find it stocked in stores locally. I found a place about an hour away that had it in stock.

Called them directly? I cant find any type of website for them

Right. I found their number on their facebook page. It was weird, but it worked.

Ill give it a search and see what i can find

If you can find me the number thatd be appreciated. Just looked for 20 minutes and cant find it! What stores did they tell you??

Looks like they have to order if if not in stock. 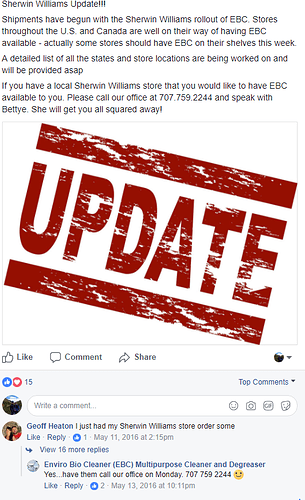 yep just called. said it wouldnt be here until monday if they ordered it and i need it friday. I guess its my fault for assuming it would be in stock

If you have a Landa dealer near you they have a degreaser that works amazing as well. Also heard good things from @Jordie about Purple Zep from HomeDepot think @squidskc gave that a trial before also.

Call EBC. They’ll tell you who stocks it in your area.

nobody within 4 hours surprisingly

Yes but Nubrite is about 15x stronger. My new binky.

where can you get nubrite?

Actually i believe ive seen this stuff online before but it was condensor cleaner i think?

Grainger, in store in my area.

Still is Sodium Hydroxide but at stronger concentration.

so youre using the condensor cleaner on the concrete? interesting… may have to swing by grainger