Hey all, haven’t seen anything posted on this topic so here’s the deal. Customer has booked a house wash but in their back yard, only 10 feet or so from an algae covered wall they have a pond with huge Koi fish, quite impressive and they LOVE their fish. So I’m concerned if a mild house wash mix would harm the fish… either thru leaching into ground, then into pond ( I doubt this will be a problem pond liner would stop this ) but what about overspray, could this harm or kill the fish ??? Any advice /input is much appreciated.

DO NOT use ANY chemicals if you choose to accept the work,One of the ladies that owns a local paper had that exact request and one of her advertiser used chemical, (we passed on the job) quess what? They killed a few of the fish. And they actually had names for their beloved fish if you can believe that. your best bet is like innocent said…walk away…fast…

Ask the owner if it is possible to relocate the fish into another tank or the facility where the y purchased them from temporarily while you wash, then have them flush the fish pond a few time’s before transferring fish back into their pond. I would also have them sign a waiver stating your not responsible for the fish. Or like the other member’s have stated, pass on the job. But if they love their fish that much, they shouldn’t have a problem relocating them from one habitat to another so you can clean their home.

I would have to walk away or use no chemicals and not be able to guarantee the wall. Some of those Koi fish can be 5-20 years old depending on how big they are. I would voice my concern to the homeowner, it’ll prob be appreciated if you show so much concern. For the record, I’ve always wanted a Koi fish pond in my backyard

Don’t even try it. I am an aquarium hobbyist and can tell you cleaning chemicals and delicate Koi won’t end well. Tell the homeowner to clean his house with a rag and a bucket and that’s what he gets for wanting a pond so close to the house. I have a window cleaning customer who begs me to power wash his house (a doctor) but he has a Koi pond right outside the front door which eliminates doing the entire front of the house, so I just keep saying no.

Hey Steve not very familiar with Koi fish ponds. Do they ever have to remove the fish during cleaning?

Yes, but it’s a huge job and you need large containers to keep the koi in. it’s not like someone can just throw them in 5 gallon buckets, and then throw them back in the pond when you’re done. You have to know what you’re doing when the fish go back so as to adjust them to the new water. My advice to you is you’re really wanting to do the job is contact the pond/aquascape company who built the pond or maintains it, for advice. Koi ponds are complex and the fish range from $150 to $3000 a peice. Not something you want to be involved in if something goes wrong and they all die.

Haha, sometimes I get frustrated at stuff like this. I have a customer who put a $100,000 slate roof on his house and now we can’t walk on it (per advise of the roofing contractor) and the homeowner is upset that we can’t clean two upper runs of gutters and won’t clean the 5 big windows that are a prominent feature of the living room because we can’t easily get a lift in the backyard and I don’t want the headache of trying to. Then they look at me like I need to solve their problem. This guy hasn’t had those five big windows cleaned in several years because nobody wants to mess with it.

Cool thanks for the information not to many people have those around me. Just curious how it all works thanks bud.

I washed a house with a Koi fish pond right off the side porch. I set up a barrier wall using plastic along the pond & between the house with the few feet of plastic on the ground running back towards the house. As an added precaution, I put down a sprinkle of gypsum pellets at the base of the plastic barrier and wet down the ground. Then I washed that side of the house & was very careful not to overspray & I used the mildest mix I could. The pond did have a liner and the grade was such that it sloped away from the pond, so I felt it was a low risk situation. I did get mist spray on the plastic facing the house but no spray in the pond. Also, wind was not blowing at the time. Fish are fine. I felt like I had control of the situation. Otherwise I would have hand washed that area or passed. 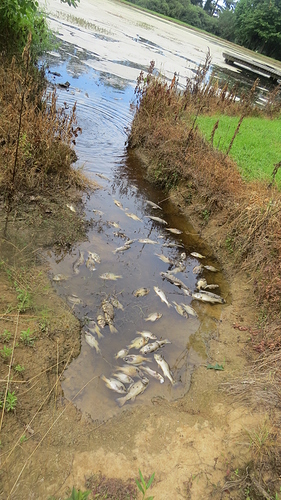 Actually this is one of my ponds at my place… This one got a bad deal of DUCKWEED it covered it not but about a 2 acre pond… I fly fish bream and bass… But this Duckweed covered the whole pond took the O2 out of it… I called the extension office they came out told me to put/spray Clipper on it… I did about 7 days later the Duckweed dies and sinks to the bottom…
Its all clear now and got a few good rains, I got a spillway on it it gets rain off from lands above it… 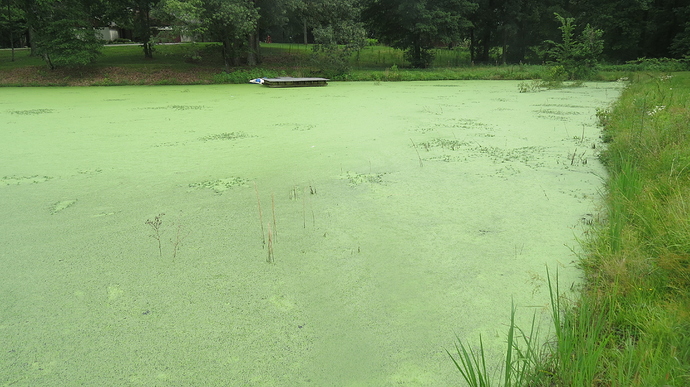 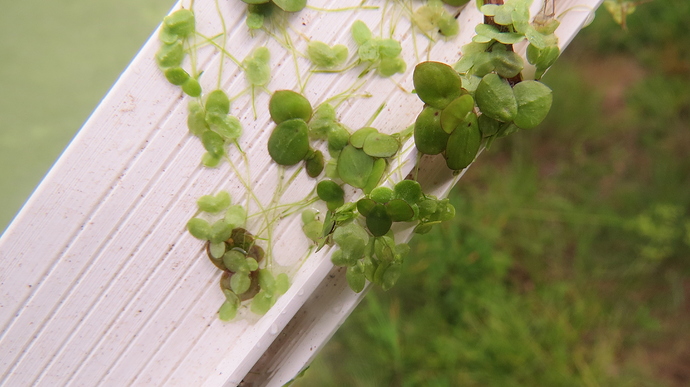