DIY proportioner (Exact Parts List as the ones selling for $400)

These are the exact parts used on the “dougenator” or the “infuser” sold by another vendor.

No idea on patents, just giving out the info. 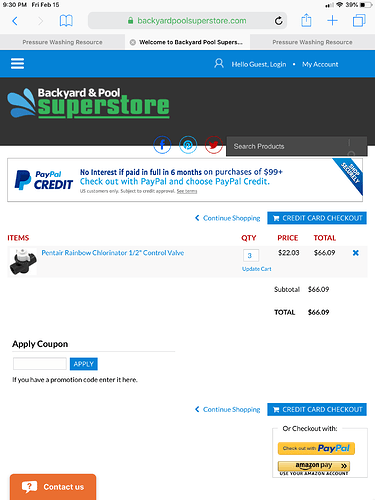 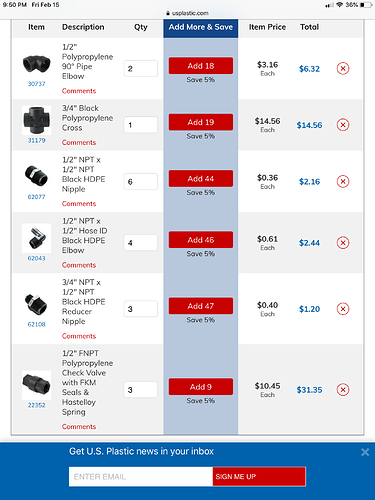 I was just trying to assemble this this weekend. Thanks man.

That cross is a beast to try to find.

I’m sure we’ve all priced them a few times
Thanks!
Screenshot it before it gone lol

Yes it is, I went to a lot of hardware stores trying to find it. I’ve actually been waiting to pull the trigger on this. I had a lot of valves that came with the old true green truck I bought, was trying to make those work. But for the $$ I’ll jjst order this tonight

Those are also the same check valves on the proportioner that they brag about …, $10. Lol

Thank you for this! Built my own. Have yet to test. Though will say that no chlorinator is designed to perfection. All mine measure a different value for fully closed. Shall I say “barely” closed. So gotta kinda “find 0” w these rainbow pentaire valves to get a more precise measure. Maybe not since I haven’t tested. On that note which of the 3 would you recommend for the water? I’d say the direct center of the 3 since its a direct straight flow.

Anyone built one of these and know about what the surfacant valve and SH valve should be set on for different ratios?

Okay, so I’m not crazy then.

Can anyone who built this give insight to durability and dilution ratios etc. I will be testing mine this weekend.

@OC2X I can give you my thoughts if you wish. I built this setup over the winter and began using it this spring. Instead of a Pentair valve for the soap I used a SMC needle valve. I purchased a majority of the parts through US Plastics. They had better prices for some items, even less expensive than Amazon. Between Amazon and US Plastics I was into it for a lot less money than other “pre-built” systems. As for durability, it has held up well, for the 8-10 hours I have used it thus far. My only issue was over tightening one of the Pentair valves as I must have cracked it and it leaked. As for dilution rates, I created a chart by varying the settings for the SH (I leave the water wide open). I think your best bet would be to run your lines (length of lines will vary draw rates) and just run water. I used 15 gallon containers and pumped water, making note of how much water and how much SH (also water) was used. I never tried using soap in my tests, but found that the needle valve gave me more control in adjusting how much soap I used in real life. If you want to message me I can send you what my SH percentages came out to be. I am using a 7 GPM Delavan with an accumulator tank. I have used it for a couple roofs and over a dozen first generation Trek decks and I won’t go back to batch mixing.

I build one as well, I will tell you I about gave up on trying to make the thing work. It kept leaking for some reason but only when I had it connected to the wand to stop flow… it would build up pressure and somehow make its way back to my proportioner and cause a leak. I had to put a check valve after the proportioner and that stopped it… I also used pipe dope and teflon and could not for the life of me to get pipe dope to work and create a seal. It has held up well though and seems to work just fine

Thanks for the input. I may put another check valve in also. I will add soap to my sh tank and cap third valve on the cross. I also used us plastics to order all but the pentair valves. I will test hopefully this weekend and give relay the results.