I have a new trailer and want to add a tongue mount box, is the DeeZee plastic box too flimsy?
I don’t plan on heavy metal payload, but don’t want a cheap A$$ box either. Just something to store tie down, and 1 gal jugs and stuff. Seems the metal boxes run over $250 to $350.

Ive had a few plastic saddle style toolboxes for trucks… they sag over time with lots of weight… but they always served me well.

i believe @Racer has a similar style “heavy duty plastic” trailer tool box. And he loves his, says he was actually surprised at its quality, thought he would have to replace it soon after he built his trailer etc.

I’m actually going to pick up this tongue box as well for the trailer i’m building right now. Whats the worst that can happen, it lasts 3 years? i’ll buy a real metal one next time if thats the case. For 160$ its worth the gamble, it also has a limited lifetime warranty. maybe that means something.

I went ahead and ordered it, we shall see…

Is this the one you’re getting? Just make sure wide enough so you can bolt down to tongue. 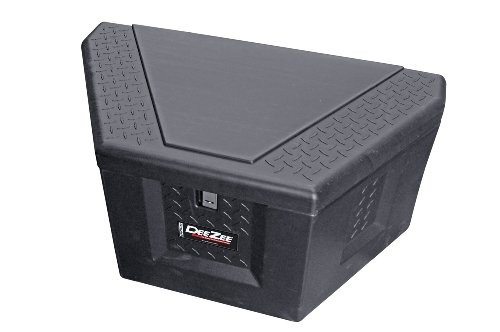 The Dee Zee Tool Box toolbox for trailer tongues is constructed of strong yet lightweight plastic. It is built to mount onto trailer tongues, and works well for storage wherever you may need it. The s ...

That’s the one. Hope it fits, not sure the angle is the same as my A frame, but it should be plenty wide @ 36" in the back

I have some plywood I will fit inside the bottom if need be, and also some 5/16 inch bolts, nuts and washers…

Any hardware you use on that trailer always use stainless. Costs a little more but worth it. 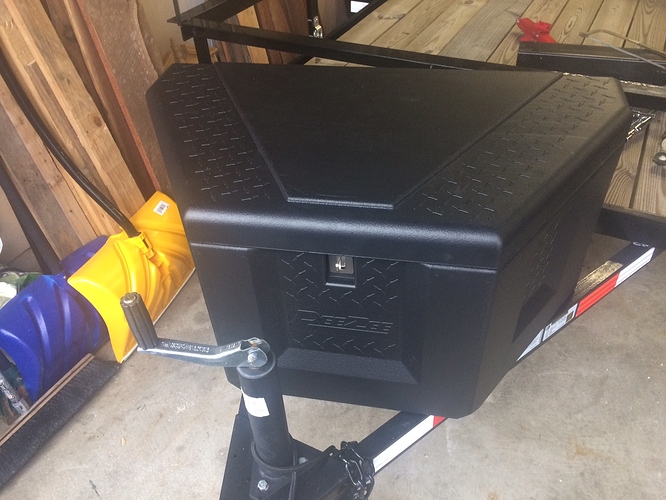 DeeZee.JPG1632×1224 515 KB
Only one problem, the spare mount gotta go
So I relocated the spare to the side rail 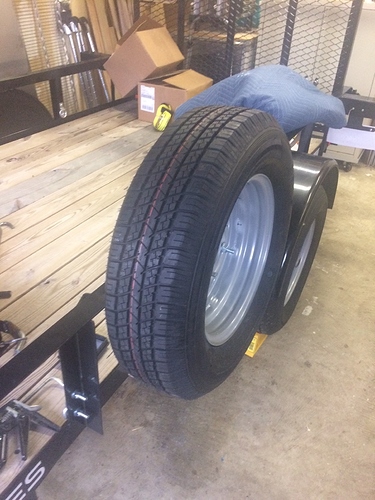 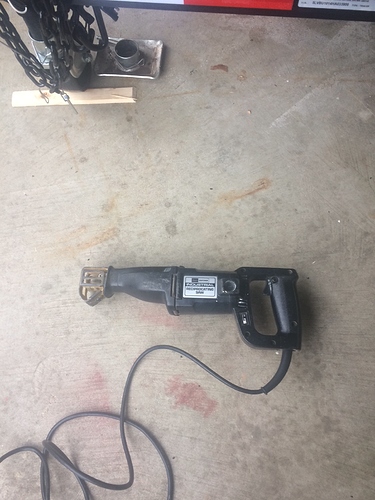 So, I am having to resort to the old guys method, elbow grease, cutting oil and 60 year old hacksaw. I am taking a break, about halfway through. ( I don’t have a tourch) 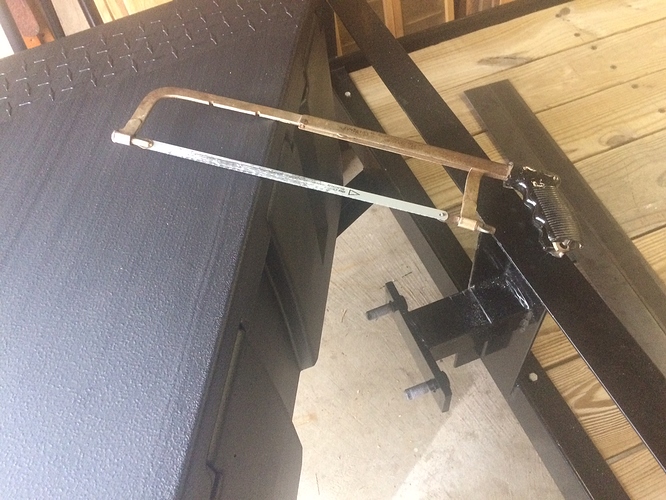 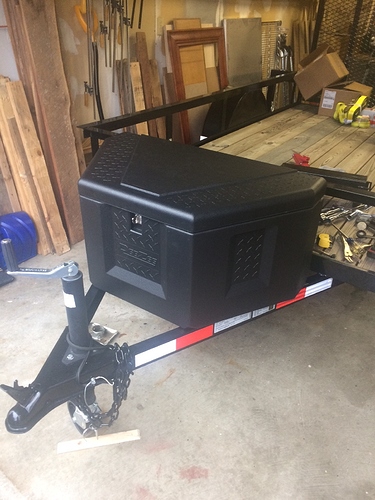 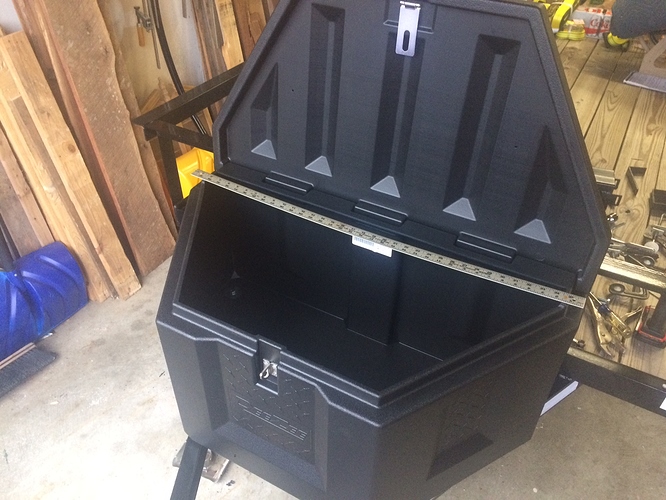 DeeZee3.JPG1632×1224 538 KB
Unfortunately, I had to allow space between the rail and the box, so the lid could open, check this on your trailer first. 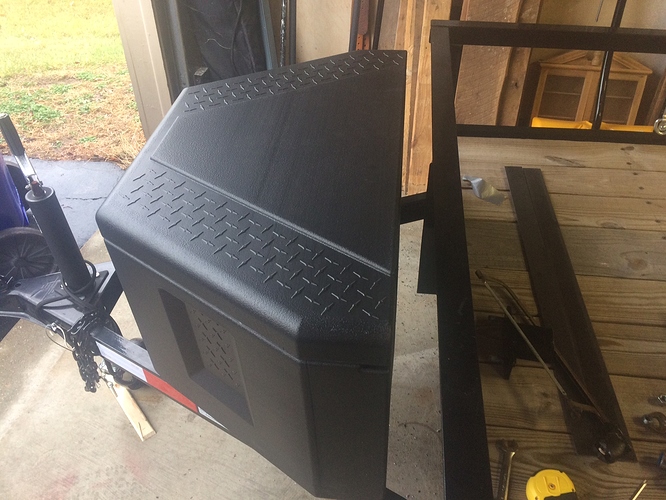 DeeZee4.JPG1632×1224 606 KB
It is nice and sturdy, I thought I would need additional support, but not for my needs. I could probably stand inside it, but I didn’t try. Will be great for tie downs, tools, light weight stuff. I wouldn’t haul tons of stuff.
Not bad for a plastic box. I drilled out the fender washers and used heavier hardware 3/8", threw out the 1/4" screws it came with. Would I buy again, probably. Would I try to install it by myself again? Heck no. You will need a helper! (to hold the bolts from topside, I used bolt-thru hardware, not the included screws)
I didn’t like the spare on the side rail, so I put it behind the box. Takes a little real estate from the trailer bed, but safer and better looking and easier to get around the trailer in tight places. 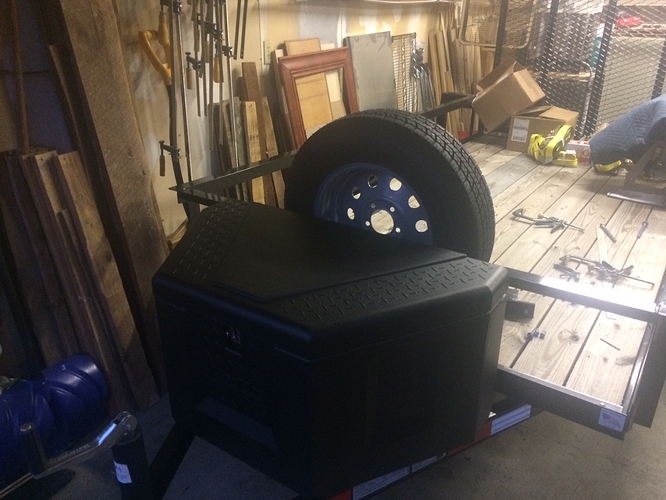 That’s a lot to cut with hacksaw. Better you than me, lol

I was tempted to go by a new sawsall, but about 15 minutes and two saw blades, the hacksaw did the trick, I think the oil helped. My arm will be sore tomorrow. That hacksaw is older than I am, but still does the trick. Fresh blades made it happen! 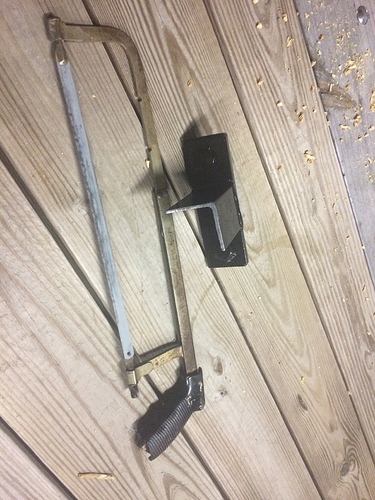 I like the box, it is NOT water tight, however, no seal on the lid. It really is wasted space on that tongue.
Next is mounting my two tanks. Pressure washer will be last up. This is a surface cleaner rig…