Please help. Anyone have any good techniques or ideas for curling up a 100ft non marking hose. I wrestled the thing for a half hour and it didn’t end well. I know I need to get a hose reel.

Of course, a hose reel is the obvious solution, but in the meantime you can use the what I call the “flip” technique. It’s hard to explain, but basically you let the hose turn in your hand. The hose is form and won’t really coil like a rope or anything like that.

I doubt my explanation was useful, but maybe you can find a YouTube video or something to help you. Definitely though, the hose needed to be stretched out straight. (Either a 50’ “horseshoe” or a straight 100’ line…the 50’ horseshoe is easiest, it think)

I grew up near Scotland which is the home of curling.

Basically you want to park your truck at the end of a long, wet driveway. Next take a good run up to the driveway, drop your front knee and use your hips and back to provide some extra “oomph” as you push the hose down the wet driveway.

Then, get your helpers to run backwards and sweep away any leaves of obstacles in the way of the hose. This will help it curl faster.

The Russians use leaf blowers but this is generally considered cheating.

If you time everything just right, that hose willl fly down the wet drive, hit a curb and fly up in the air… 10 points if it lands nearly in the deck of your truck.

You’ve got to stretch it out so it can un-twist as you roll it up. Really, you come on a professional power washers forum and ask how to roll up a hose. Figure it out, it’s a hose.

The audio techs call it “over-under” it’s worth a google. Next to impossible with a steel braided hose tho! Works a treat with my WFP hose

Can do it with big enough loops.

Or have you entire hose in coils. But keep the sections short enough to be manageable.

Since I’m still working out of my prius, I obviously don’t have hose reels at this point. I struggled with the hose curling the first few times. The flipping didn’t work for me because the hose was too long and heavy, and 75’ of hose curled up doesn’t rest in the palm of one hand well. I tried having m wife hold the hose with her two arms out and me wind it around her arms. It worked well, but she didn’t like it, so that method was out.

I ended up doing some kind of weird spinning thing. Makes me dizzy if I go to fast, but it works well and curls the hose perfectly. I’ll try to describe it at the risk of severe humiliation from people with hose reels…

lay the hose out straight and flat. Straight line or “U” shape (takes up half the space) works fine. Take one end of the hose and pull it from behind you over one shoulder and hold with one hand. Then I walk down the length of the hose, spinning slowly to get the wrapping or curling effect without the hose fighting me. While doing the spinning, I work the hose from over the one shoulder to under my arm on the other side, then around my chest, back over my first should, down across my back, under my arm on the second side, back up and across my check, over my first shoulder… You get the idea hopefully.

This technique allows me to get an appropriate coil size, my spinning slowly as I wrap the hose prevents the house from twisting or fighting, and since the hose is wrapped around and resting on one shoulder, I don’t have to worry about handling the full coil in the palm of one hand.

It’s a lot of work and I definitely want to get a small trailer with hose reels soon, but it works well for now.

Take one end of the hose and pull it from behind you over one shoulder and hold with one hand. Then I walk down the length of the hose, spinning slowly to get the wrapping or curling effect without the hose fighting me. While doing the spinning, I work the hose from over the one shoulder to under my arm on the other side, then around my chest, back over my first should, down across my back, under my arm on the second side, back up and across my check, over my first shoulder…

omg. You have got to shoot a video of this. I’m cracking up just imagining it. Sounds rather ingenious. Necessity, invention, and all that.

I know I need to get a hose reel.

put it on a credit card if you have to. you are killing yourself to save $200.

Bubble guy nailed it. I think I spent $205 on the dot per cox hose reel. I haven’t even opened the boxes because I think I’m gonna upgrade before I use them. I have two Reel Craft reels I got from a pest control company on Craigslist for $80/piece. I hate them, but I hated not having hose reels wayyyy more.

You can get crappy hose reels at Tractor Supply or Home Depot that’ll last you 6 months at least, but it’ll take 1/3 as long to pack up hoses and you’ll love yourself for it.

Thanks for all your responses. That hose kicked my ass, but i figured it out for now until I get a reel.

So would a cox reel be able to fit 100 ft 3/8 steel braded non marking hose. Is this a good hose or should I be looking for something else. I’m just starting a company out and looking for all the good advise as I can get from the pros. @squidskc @Jordie

100 feet of hose tethered to a reel will be as annoying as not having a reel. 200’ feet will get you to the furthest corner of 99% of jobs you’re going to do. 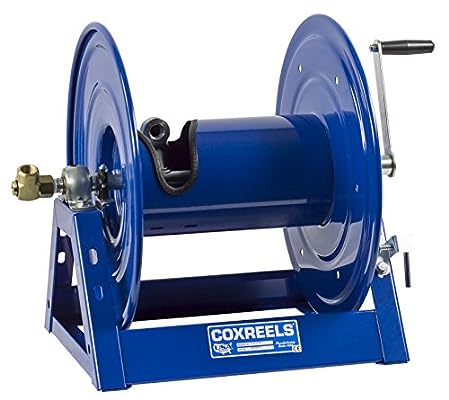 This Coxreels 1125 Series hose reel is designed for air, water, oil, or pressure washer applications and is manual rewind by hand crank action. The reel can be mounted to a floor, wall, ceiling, bench ...

Awesome. What kind of hose do you use @squidskc

@Innocentbystander has a Canadian contact for hoses, which means they’re probably better than both hoses above if you’re looking to upgrade.

I don’t know anything about that hose reel, but my garden shed engineer says that u-channel base is substantially less durable than the stamped A-frame. Spend the extra $50. If that U-channel bends it could rack your reel and become a pain to crank.

No experience with it, but from the outside looking in I’d make a confident bet that the above applies.

I don’t have hoses plumbed into my reels. My reels just store the hoses. They come off completely and hook right up to the pump. But when I get the time to build a rack for the new reels I’ll just plumb in the 3/8" to the 1/2" reel with reducers. A 1/2" hose reel will still hold a 3/8" hose.