Long time lurker. I’m in the process of building out a 5x10 trailer and I came across a good deal on Zoro.com for some Cox reels.

Yes, I know they are not the best out there, but I’m brand new and don’t want to break the bank quite yet. I’m also not going to run the high pressure reel live, just for supply hose. Thought it was worth sharing. 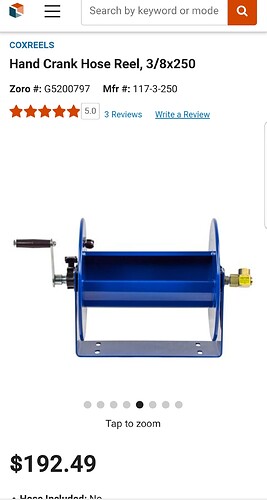 I’m a buy once, cry once type. I wouldn’t buy those, a year would be about it most likely….for 150.00 more you can get Hannay……but you do what you feel is best in the position you’re in. I look at business as an investment with a return, so you have to spend some money to make some money. In pressure washing you make your money back quickly…my whole rig was paid for in 5 weeks, so….much success though either way.

What’s wrong with this hose reel? Why is this not one you would recommend

I’ve got one of those. Think I paid $50 for it slightly used. I’m thinking of putting together another 12v cart and using it on there.

I’ve seen mixed reviews. Some have used them for years, some say they’re junk.

Im probably too late here, but i ended up returning this same model back because i didnt want to deal with adding a 90 degree elbow on them. I ended up getting two of the 1125 series though. One of the swivels is leaking as soon as i bought it but they shipped out another. Hopefully that fixes it. they seem sturdy enough but have not used them very long.