A friend of mine recently had an outdoor brick fireplace built on their new screened porch. The contractor apparently didn’t put down anything to protect the new wood and mortar dust has set on the wood. Wondering if anyone has any experience cleaning something like this? Any suggestions? This isn’t for a paid job or anything, just trying to help a friend figure it out.

Some pics for reference 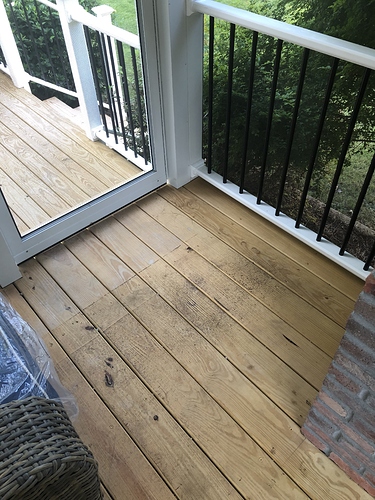 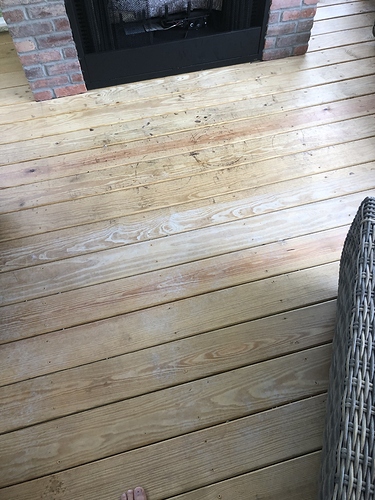 man that sucks, guy left bucket marks all over the deck too. I hate shoddy workmanship. Think the homeowner should have him fix it, by paying a professional to fix it (I wouldn’t let that guy work on my stuff again). A piece of cardboard would have fixed all of that. Masons are the prima donnas of the construction field.

I’ve never tried to get mortar off wood before, but I would backpack blow everything, maybe even use a compressor with a nozzle jet for any deeply grained wood, then clean it. Doesn’t look stained. Maybe it is sealed, but can’t tell from the pics.

Yeah, it does. I’ve told them basically the same thing about having the brick mason pay for it being fixed (unfortunately they paid already, so we’ll see how that goes). If it was a client I would tell them that and walk away, but with it being a good friend I want to help and make sure it’s done right in the end also.

They took soapy water and a soft brush to it this morning, but to no avail. No stain or sealer, just raw wood. Couldn’t believe my eyes when he sent me pics.

I know I’ve used nmd 80 to take some mortar off of brick before, not sure how wood would handle it though

Mike, easiest thing to do is flip the boards or replace them. I just re decked my deck because it was easier than trying to strip of old Cabots stain and it looked better.

Being a smaller area have you guys tried a belt sander? Maybe see if it can just be sanded a bit.

Well, if it was my friend, what I would do is tell him to rent a random orbital floor sander, some pads, and since the deck isn’t finished some 60 grit sandpaper. Tell him to pick out a stain or sealer. I would sand the deck for him, vacuum it up, then help him stain it or seal it (may need a palm sander too for corners and rail areas and some sheet s of sandpaper).

If he/she is more of an acquantice, I would tell them to get a painter in to help them sand their deck down and stain it and bill the mason.

Sheezh, it’s dust on a piece of wood. Break out your pressure washer and wash it off… That’s a nice grade of wood, very few knots, but you can still hit it with 1000 psi unless pine then a little more. Do it just like you were cleaning it, board by board. Try a couple and see. Can’t hurt it now. If that doesn’t work, which I think it will, then flip as William suggested.

Lol, I know I know. Probably seems silly, but since it isn’t something I’ve not worked with before (mortar on wood) I wanted to survey the experts.

Wow, can’t say as I will ever do this again, that is to disagree with 2 people I have learned a ton from, but I wouldn’t flip those boards. That is a screened in porch, which means the boards will likely run under all the “items” that are used to screen it in (like a wall, framed out I would imagine). Sanding will work, and a random orbital will make the entire deck surface look the same (so long as you blend the edges in).

In your first pick you can see the mat stain/shading, so just doing by the chimney will leave a light spot where the mat was. Then it won’t blend in right, hence my recommendation to sand it all and stain/seal it. Like I said, friends I am all for it, acquantices can hire someone.

Now I am off to ask a stupid question on the forums.

It does resemble a mat stain/shading, but this is a brand new not even 2 months old and they don’t keep a mat there. That is all from the brick mason.

dang, sorry to hear that, he must have mixed his mortar right where he worked and the dust went everywhere and laid there, and apparently tarps must not have been used. Maybe they were and wind blew the dust all over, I don’t know. I just know that the fine particles from mortar mix will work their way into every single nook and cranny and are even hard to remove from a painted and sealed concrete floor. Don’t ask me how I know, there is still lingering pain in my lower back from the cleanup…

can’t say as I will ever do this again, that is to disagree with 2 people I have learned a ton from,

Heck, I disagree with myself all the time, no worries

Try doing like I said. Only need to do 2 boards and let dry to find out. 10 min worth of work. Either it does or it doesn’t, but the simplest solution. Let us know.

That should be on a shirt or coffee mug

If pressure washing doesn’t work I would use acid to break it down. We know mason’s use it to clean the mortar off of the brick face and we know that’s what we use to brighten wood. Muriatic is stronger than what we use though so will have to be careful. They usually recommend 5 parts muriatic to 1 water for brick so I’d go weaker first. Maybe 10:1. Make it stronger if need be. I wouldn’t let it dwell long at all and rinse after a minute or two. I would also pre wet the wood so the pores soak up a lot of water. That should help keep the acid on the surface. I think multiple applications with rinsing in between would be safer and it will help keep the pores full of water. Since it will brighten it you’ll have to spray the whole deck so it all looks the same though. I know I don’t need to tell you to test in an inconspicuous area first but it’ll make me feel better if I do.

and apparently tarps must not have been used

Just wait until you get a bunch of house washes under your belt. You’ll see concrete splatter on siding from a new patio or driveway pour. I see it all the time. It’s on brand new houses, older houses that are getting a new driveway, etc. It drives me nuts. It would take 5 minutes to hang some painter’s plastic with some tape or you could just keep a rag hanging from your belt loop. I was washing a house one day and the lady said the concrete guy told her the splatter would wash right off. That concrete guy happened to be at the neighbor’s house pouring a pad. She tells him I said it won’t just wash off and he yells over for me to put in the yellow tip or use the red from a distance. I guess he at least said to use it from a distance…lol

That is too funny. Guess no one took that guy to court yet, it will happen one day. I used a red tip to remove mortar from bricks before, I know it will take all kinds of stuff off at high pressure. Wonder how many bricks he has “etched” before.

I was helping my buddy paint a brick house today because work is very slow, we hung plastic over windows and laid tarps out. I pressure washed this chimney (25’ high after the balcony), one restore was less than wonderful getting the copper runoff off the chimney. I quit, hate spraying acid above my head. It took a bunch off, but not all, and I was not getting on that moss covered roof with no grit on the shingles to do the other side. Not my job and I wasn’t getting paid. Stuff smells just like muriatic acid.