Hope these photos upload. This is one of clients barn they they were going to put metal siding up because of fire danger. Now he wants an estimate to clean this up, and most likely have it stained. I would not do the staining. My plan is to it hit it with percarb 6-8oz per gal. White tip rinse or ball valve it if it strips well from the chemical. But I was thinking of using my xjet to apply it. Now I know I would need a hotter mix for that, just not sure how many oz to the 5 gal would be right. Now the great neutralize or not question? 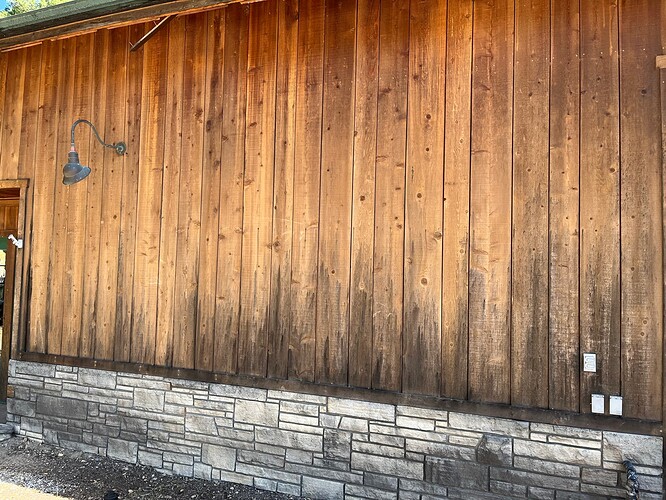 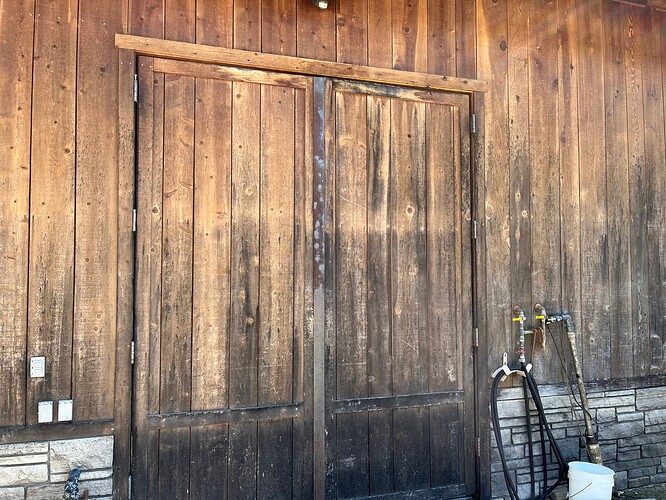 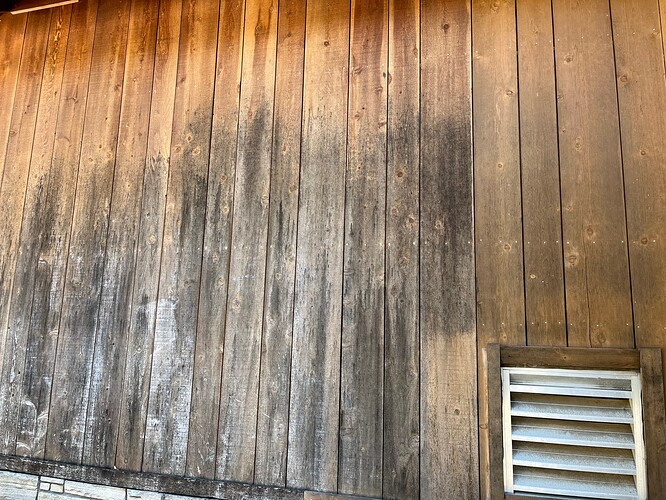 Other than bottom of that door, my hw mix would clean than in a couple of passes. Medium rinse, can’t really go over about 1000 psi on cedar. @MDA1775 does a lot more cedar than I do though. Maybe he’ll pop on.

That would make my life easier. I have to clean the roof also, so 12 volt would work and only need one chem. I was just worried of getting that bleached out look with Sh.

S Percarbonate is going to disappoint your expectation. SH will do it but you’ve got a lot of UV damage there so it’s going to fur no matter what you do. If you’re concerned about the bleached out look you can use sodium metasillacate, followed by oxalic and a good rinse. In addition to the UV damage there is some tannin bleeding and the oxalic will take care of that too. You could probably DS both starting at 8 oz per gal. Cut way back on the caustic if you’re using a 12v. The type of stain they plan on using should also be a planning factor when you’re doing the cleaning.

As far as I know, softwashing anything cedar is going to sort of “bleach” it. People come to love the look of their “weathered” cedar, but not so much when it starts growing stuff…but then they tend to want you to get rid of the growth without really taking it back to a “like new” state… Got a guy who claims we “ruined” his cedar, because we cleaned his house…looks nice and clean to me… Lesson here: make sure you talk abouttheir expectations specifically regarding the cedar and the final appearance. 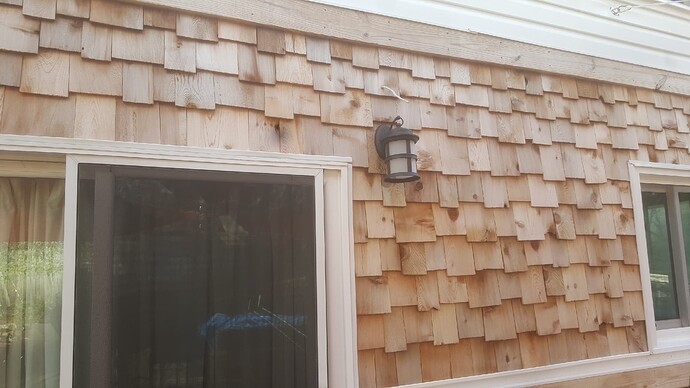 That’s messed up. What did he think you were going to do to it?

No clue…I’m assuming he wanted his house washed, but his cedar to keep that aged look…

Customer: Can you wash my house but not all of it, and I’ll let you figure out what part not to wash.

Looks like they did a great job. He should now stain it. They have gray stains and dark stains.

This is a good reminder for me to keep asking customers what material they have on their house. 99.9% of the time for me it’s vinyl (and sometimes they have some brick mixed in).

Yep, we ask what it is “mostly”…people with cedar or aluminum usually that’s the predominate material…this guy it’s just the walkout level backside of his basement…so he said “mostly vinyl”…

I had a guy ask me to wash his trim - he doesn’t want his cedar touched, just the trim. I literally asked him how he expected me to do that and he said “on a ladder with a rag, just need you to wipe the trim down” - Get this - it’s a 12,000 square foot home! I had to mute to keep him from hearing me laughing. I told him I could wash his house, but not use bleach, just housewash, but that’s about all I could do. He’s thinking about it…

I am pretty sure of the answer from the custom will be. The problem with using any caustic products is this is a very big wine growing region. Everyone here is very concerned with what enters the ground. One of the reasons we do so much hot water cleaning vs chems for flat work is, they just don’t want it done. Once I can come up with a process that can provide a quality cleaning but (in their terms, doesn’t poison the ground) life will be easy. I get a lot of push back from just using SH around here. I have been looking into some of the so called Safer premixed products, but most of the time those are junk.

Sheesh.
What’s the trim made out of?

@MDA1775 - would you recommend using the metasillacate versus housewash and bleach mix (1-1.5%) and followup with oxalic ? If you mix oxalic ahead of time (perhaps the night before) to dissolve it would that be downstreamable? I’m trying to understand the easiest way to wash cedar siding on a house - I’ve never washed cedar before - they just want it cleaned back to its original look.

I am wondering the same question right now? Thanks for asking that.

I clean wood based on what the customers expectations are, are they staining? Stain type? Wood condition? I use SH 95+% of the time. I use oxalic as needed but i primarily do fences and garage doors. 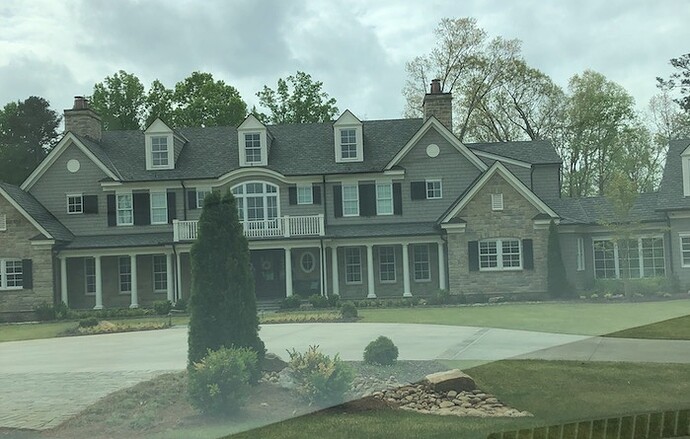 I’m pretty sure it’s just natural - will find more next week. Do you downstream Oxalic or just use a sprayer? I’m wondering if there is a quicker way to get it on the side of a house - I’m concerned that if I downstream Oxalic I could run the risk of etching the glass windows… Unclear right now if they are staining so my goal was to get it back to looking like it did when new - just raw cedar shakes. (Not the 12k SF house - that one is painted - the question is about a different house with just natural cedar shakes that have black stains in some areas - I won’t have a picture till next week…)

Is that cedar shake real wood? From the pic it’s hard to tell. We have a lot of it around here that looks like cedar shake but it’s fake and it’s really vinyl.

I haven’t confirmed yet (still scheduling a time to get with homeowner - based on the “12k isn’t that big” comment - I decided to drive by and see if this house actually existed - it’s 2 years old and doesn’t list on zillow or realtor yet) so I didn’t go onto his property - hopefully next week. He said that it’s stained cedar which is all I’m going off of at this point. He stated that he doesn’t need the cedar cleaned, but wants more than just a pollen wash - I thought I would just hit it with housewash and no bleach which should freshen it up a little and hopefully give him what he’s after. He said there is no dirt or organics to speak of, so at this point, I’m just going off of his word. The pic was from inside a car - I was near where he was so thought I’d swing by and make sure it wasn’t another scammer - had a few of those here recently.

ah the scammers…had a few gems recently. Different names & addresses, same phone #. I took to demanding payment in full, up front, and only in Dubloons. The texts seem to have slowed after that…