This weekend In my shop at my house I’m going to build 2 large Powerwashing machine setups on my Flatbed truck and then a couple of Hours on Monday when my guys get back where going to start the re-arranging process and then Wed July 4th 3 of us are going to bolt everything down and Thursday if all goes well out they’ll go out with this new set-up.

What I did was buy I think the last two frames that Envirospec had. I also bought a 40 HP Kohler Engine from them along with two pumps. One machine will have the 40hp engine with two 8.5gpm pumps on it, the Second Powerwasher I am going to use the 34 HP on the truck now and convert that to a Pump with a generator setup with it that will go on Frame number 2. Then I am going to do away with the Gear set-up and take that 30 HP engine thats running a TSF 2021 pump and make that a Belt driven set-up with a 10gpm pump that UDOR sent me after we actually blew up the last one(Only second time that happened to them supposedly and UDOR pumps still to me are the best built and best bang for the buck.

So on the Flatbed there will be two burners still as well but we changed out one tank to make room by adding a smaller tank so now instead of being able to carry aprox 900 gallons of water on this bed we will only be able to carry 800 gallons but we can run multiple hoses to these tanks to keep water in there when all Powerwashers are being used.

So now we will be able to produce on that truck up to 35.5 gpm with all being over 3000psi and as high as 3600+ with up to 18.5 of those gallons being able to be heated over 200 degrees. When I finish the parking garage trailer with reclaim on it there is also another 8gpm machine thats needs a burner I’ll be purchasing soon(I took the burner that came with that system and put it on the flatbed. All told because we can also hook 2 small machines off a tank we will be able to run about 50gpm all over 3000 psi with 27.5 gallons being heated if need be…

This seems like over kill but if you saw how I operate you would understand this. We rinse at high volumes with a small crew that has alot of power accessible when needed. Where doing alot more Condo complexes and even though our garage cleaning dropped off a little this year because of a mild winter the goal is to get more of them as well.

If we need more water I have another truck that can hold another 450gallon water tank in the bed which can be hooked into the flatbed water tanks.

This system should rock. Also it covers my guys when one machine goes down like what happened this week. With 3 guys working they can between them use all of the Powerwashers on the truck because the 40hp has the ability to run both of those pumps together where on guy can rinse at 17gpm…

The only problem I see here is me…lol I’m going to put these machines together Sat and Sun this weekend with a heat wave coming and a pool right behind my shop-- Do I want to build or swim:rolleyes:

Do you go to any of the events around the country?

I’d love to run into you and talk shop sometime. I started out
years ago as strictly a wc’ing company. This winter I invested
in a truck and bought an enclosed trailer. We built a pw’ing system
inside and are doing a ton of house washing and condo complexes.

I’d love to get into the commercial and parking garages but wouldn’t
even know where to start.

Good luck with the build! Please share pictures when you finish.

Hey Kyle-- I go to a couple of events a year. This past year I went to Nola and the PWNA convention. October 22-24 I’ll be at the PWNA Convention in Orlando FL. Then next year we’ll be at the Nola event and if a couple of parking garage guys pull off there event that there planning in Vegas I plan on attending that.

Catch me at one of these or on the net and we can talk shop anytime. I’ll keep you guys posted with pictures on this flatbed setup I’m doing. I learned alot from guys on the Net over the years so I don’t mind giving it back:cool:

when is the pwna is convention in orlando that is in my back yard.

when is the pwna is convention in orlando that is in my back yard.

Oct 22-24th. If all goes well I’ll be bringing a guest or two. It’s all about Risk:D and having fun… And learning from others who have been around for years and are successful. Go to the PWNA website for up to date info about there Convention. Last years was solid and this year it’s there 20th anniversary and so far it’s looking like another good convention that’s coming together.

We had a house staining job schedule for today July 4th which was canceled so we worked 12 hours on getting two skids up on my flatbed with one more going on tomorrow before a 10:00am Powerwashing job. The reason why I have to get this truck done ASAP is because where starting another Condo job this Monday and where backed up so I can’t have this truck go down…
I will post pics soon of the near completed project. Where waiting on another burner from Envirospec which will complete this truck and gave it ready big time for… Battle:cool:

[COLOR=#333333]We pretty much put this together on July 4th(Wed) because it rained that morning which we were supposed to stain a house. Ive been tweaking this setup the past week when my other truck goes out with the trailer. [/COLOR]

[COLOR=#333333]What I did was change out the motors to the Powerwasher I bought from Guy Blackmon. Thats the powerwasher behind the drivers side. I took the 34 HP kohler he had there(That motor only had an hour on it when I bought it from Guy who just bought it from someone else that never used this Powerwasher) and replaced it with a 30 HP Kohler. That one runs a TSF 2021 Pump rated at 8.5GPM @3600 psi. The powerwashers on the back of the truck I scratch the 2 pump set up and took the 34 HP and hooked it up to another TSF 2021 and I also put in a 5000 watt generator to run with it. I still have to finish connecting that.[/COLOR]

[COLOR=#333333]The 40HP Kohler which is the new engine on the back left side is running a UDOR pump rated at 10 gpm@3500psi. That Pump Udor gave me to replace the one we imploded(Supposedly that was only the second time that happen to a UDOR pump). To get the true power with a pump of that size you need 37hp so the couple of extra hp on these engines keeps the pump always running at there true ratings.[/COLOR]

[COLOR=#333333]Next week I’m getting the other Burner from Envirospec to match the one there already. I also put the Roof Cleaning Hose on one of the Steele Eagle reels. This truck is a low profile setup where all of it is under 6’8" at its highest point to where it can fit into most parking garages as well.[/COLOR]
[COLOR=#333333]The only thing that I am concerned about is the legality of the gas tanks that close to the rear of the truck. I could always move the gas tanks.[/COLOR]

[COLOR=#333333]Its going to be one big Powerful truck set-up that pretty much can handle most of our needs that involve High GPM’s for rinsing and high PSI’s for those tough jobs such as Parking decks.[/COLOR]

I’m heading out to work on the belt guards to cover the pulleys. I’m also going to cover or blend that exposed part of the red gas tank to either make it look black or cover that opening with a black piece of something. There’s plenty of vent holes in there so the gas tank can breath.

You can see what I put together if you zoom in on
my avatar. It’s those two kohler monsters on the back of my flatbed. The kohler on the left is a 40hp & it has a Udor pump rated @10.5gpm @3600 psi.

The Kohler engine on the right is a 34hp that I bought used from Guy Blackman that only had 1hr on it so it was basically new. There’s a 5000watt generator and a general pump rated @ 8.5gpm @3500 psi hooked to it.

Kohler engines to me are the best small engines built.

What psi is your 12gpm Udor pump rated at? If your going to run it at full capacity that will tell you what the minimum size engine you will need.

I’m considering a used one that I’m told envirospec built a couple years ago. The pump isn’t listed on their site, because it was built custom. That’s what I understand anyway. Maybe these pics will help you help me… 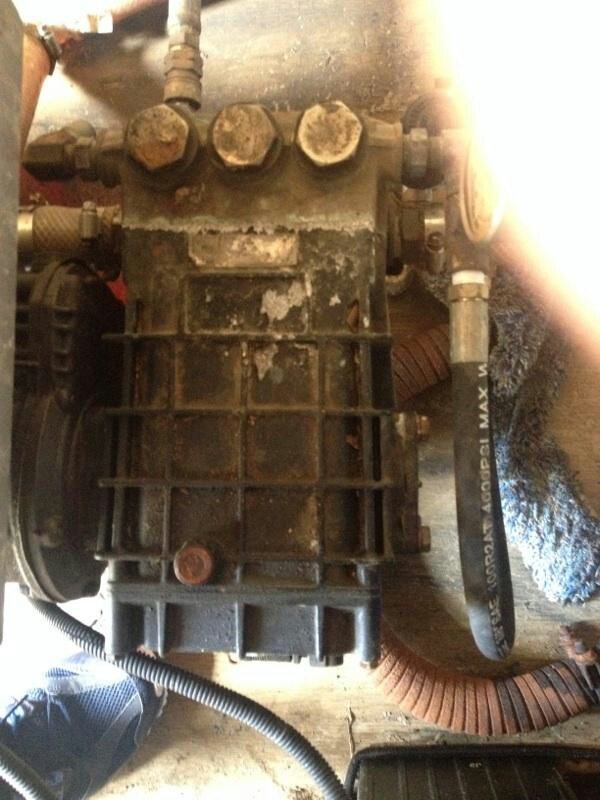 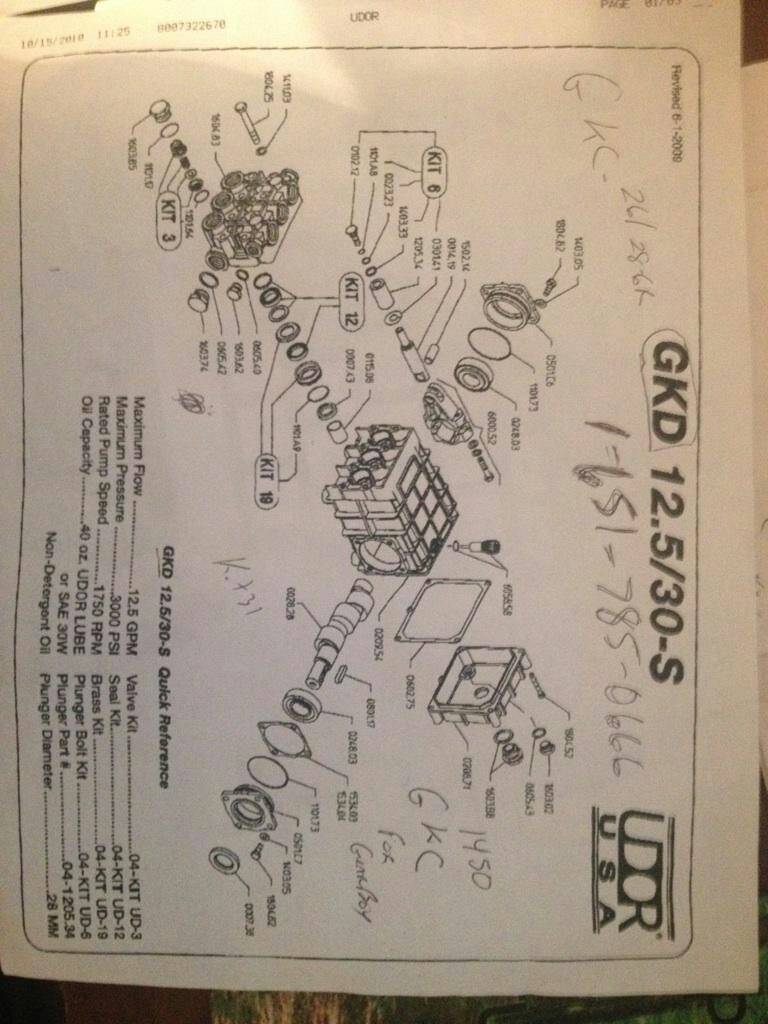 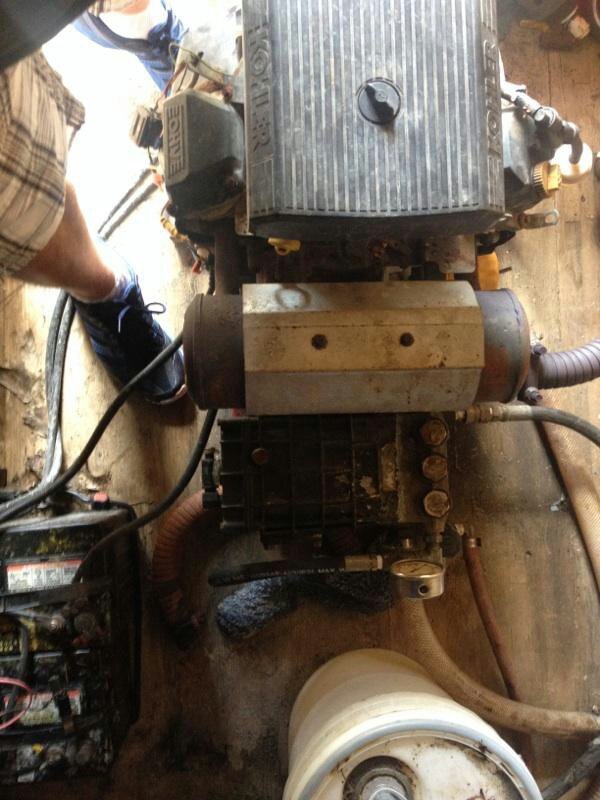