i have another machine ill be using for concrete…

Do you mind telling us what your other machine for concrete will be? Just a little curious about this setup you have in mind.

Recommendations for 1500psi @ 8gpm are suboptimul as evedendanced by the dirth of that spec on the sales floor. With that recommendation you should place the cavet that using a 3/8 inch hose at 100ft long will yield a pressure drop of 300psi. (ref: hose friction loss page 7 General Pump Install operation service manual.) i.e. usable pressure of 1200psi at the gun… I’m still OK with what I said. Big pump with small motor = problems.

Search here. I, and others, have started the friction loss numerous times over the years. I’m glad your here. If you want to stay, follow the rules, introduce yourself and try to be civil. I have no doubt that you have a lot you can being t to the table. When you get a grasp on how pumps and engines work together you’ll probably even change your mind on thinking engines get overworked

The engine isn’t going to get overworked. It’s going to produce the same horsepower at the same rpm regardless of what’s attached to it. It might not be enough for what you want it to produce, but it’s not going to dig down deep and give a little extra for the Gipper.

You can set the unloader to give you 8 gpm, or 3500 psi, just not both. For most purposes, gpm is the better option.

My other machine is a 4/3200 11 hp honda and it does fine on concrete. Right now i use a siamese kit to run both machines together and get 8gpm for house washing. And i’d just like to add a little more efficiency. So making one machine stronger will make it so i dont have to take up both machines on 1 task. so i can have my helper operate a machine while im doing the house wash.

Recommendations for 1500psi @ 8gpm are suboptimul as evedendanced by the dirth of that spec on the sales floor.

You can set the unloader to give you 8 gpm, or 3500 psi, just not both. For most purposes, gpm is the better option.

Very interesting, good to know. I was concerned a pump upgrade would overwork the motor. Didn’t know you can just set the unloader for less PSI.

Didn’t know you can just set the unloader for less PSI.

That’s not exactly what I said, but you are in the right ballpark. I’m working out of town the next few nights so if you call me after about 7pm I’ll help you if I can.

Got it. I have that same 4/3200 GX340 unit as my back up on gear drive. My main that I am just putting on the truck is a 8/3000 with GX690 and the above linked Udor on belt drive. I wonder if you thought about selling that GX390 PW for around $6-700 and get a 22 HP Predator like @SchertzServicesLLC and some other guys have done. With the extended warranty and a coupon, you’re looking at $660+80 or so. Then, you can still get your 8 GPM pump on a gear drive and you’d have two versatile machines rather than risking not being able to do concrete when your GX340 has an issue. You can always look for a used Honda GX630-660-690 on CL as well. They don’t come often, but I do see some deals time to time. I don’t know, that’s just what I would consider…

Thats true i haven’t considered the gx 340 goin down its always been so good to me lol. The plan was to get the gx 390 up to 8 gpm and use the gx 340 as a second machine. Then when i get enough money build an 8gpm predator machine and use the gx390 as secondary so then i would have two 8 gpm machines

Well, if you were thinking about a Predator build anyway, I think selling one of the units as a whole for a Predator engine and going full 8/3000 setup is definitely something you should consider, so you have a back up for both house wash and concrete. If you prefer to keep the GX390, then you can try selling GX340 PW for a tad less around $5-600? If it’s a belt unit, then you should be able to get that depending on the market. If it’s a direct drive, then I’d say $4-500 is the going price. I think difference in price between the two scenarios is only about $2-300 and the upside of being able to do concrete with either is worth it, I’d say…

I’m imagining a well-used unit, btw. If it’s in a pristine condition, maybe you can get more, too. But, a GX340 unit must be pretty old…

If you do quite a bit of flat work you’re going to miss the 8 gpm you’re currently able to use. You’ll have to slow down way down with the surface cleaner if only using 4 gpm. I’m not so sure it’s worth the trade off unless you mainly do houses.

Correct method to adjust PSI is tip size - no exceptions. Unloaders are for unloading and should be adjusted accordingly. Yes an unloader will bypass at the same time as directing flow to the gun if it’s incorrectly adjusted, but don’t do it. The knob on an unloader is to set the unload (aka bypass) a few hundred PSI above the tip selection. Golden rule is never run a smaller tip than the pump is rated for. Bigger tips are fine so long as you adjust the unloader to match. 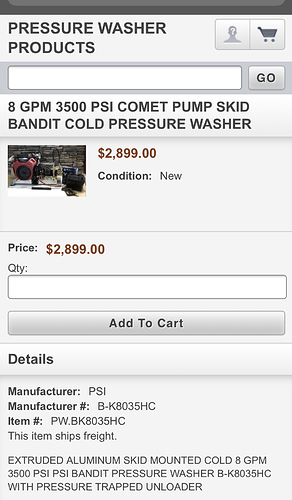