I am bidding cleaning the inside of a 30’ tall warehouse style building. It’s the spot at the dumps where people unload garbage. Every day all day giant tractors are pushing it around and other machines using diesel motors are breaking it all up causing plumes of dust and fumes. Here in good ol’ California the epa is mandating that we clean the insulation ceiling, steel beams and metal walls. I did a test area yesterday using gutter butter 1:16 strength (idea per another soot removal post) and also a heavy mix of soot remover and neither one really even touched it. I know it sounds silly but I also hit it with 2% sh just to rule that out for sure, which obviously it didn’t work. They have a fire hose that I used to blast the ceiling to rinse with (it was probably 40 gallons a minute) and that’s what ultimately ended up creating the little clean white spots you see in the pictures. However, that much pressure was starting to tear the the insulation. On the sheet metal walls I also tried using hot water with a 1000 psi tip to see if that might help. I’m at a loss as what to do, does anyone have any ideas? 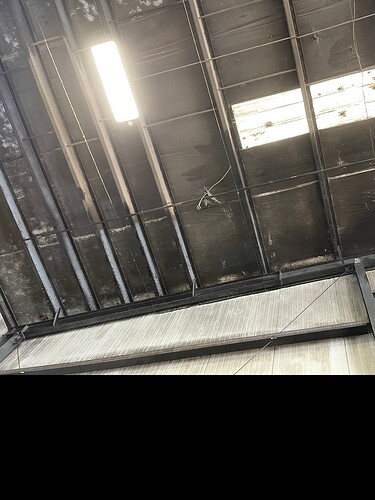 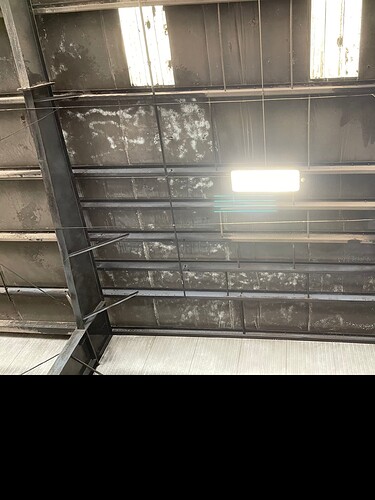 I can’t remember the guys name, but he washed a big garage that was heavy with grease and soot. He is on here so maybe he will chime in. I think he used butyl with something else, not sure. My brain says that he was east coast and went west coast.

i seem to recall someone here or YouTube doing a garbage depot with outstanding results, but that’s it.

You’re gonna fill that insulation up with water, this is a bad idea 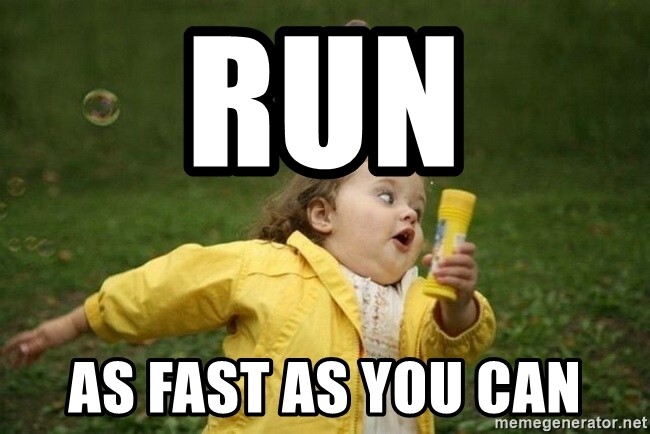 It was @Nashvillewash I think. But he wasn’t dealing with this type of insulation.

@Seandz, I’ll give you a

for trying to tackle anything and everything. As long as your game and up for it, I’m good.

I usually learn something from your capers. Usually it’s something like, “I’m glad it’s him and not me.”

Did you actually use any degreaser? That’s what you need. Try a fairly strong mix of EBC, reach out to Carlos - he’s out in your area. Something like the BD200 from Southside would probably work but I’m sure you can’t use it in CA. You could also reach out to @Hotshot 's buddy up at Hydro chem. They might have something since trucks generate a lot of soot,

Those places are pretty nasty. I bid on one here a year or so ago but it was just the outside. I wouldn’t have considered touching the inside because they had tons of electrical running everywhere because they had all kinds of automated sorting machines.

I don’t usually say this, but I’d pass. There’s nothing you can just spray up there and it all magically clean up. That’s what killed Nashville on his project - I think he ended up having to Pressure wash everything even with the right chems. People don’t want to pay you for the lost opportunity cost of what you miss being tied up on a job like that. Good luck.

Thanks for the knowledge racer. I will try ebc Monday. Also I have some potassium hydroxide (hood cleaner) and give that a shot. I’ll post pics after I try to update everyone.

Be careful with the hydroxide. It can strip paint if you let it sit too long. Probably not that big of deal here tho. The surfaces are probably thrashed anyways.

@Nashvillewash started off using a cheap degreaser. He spent days fighting it. He then when to a local chem company who mixes them for the job. After he got that it was a piece of cake for him. Spray on and rinse off.

I use to use bd200 and thought it was awesome. Don’t get me wrong. It’s good stuff and will eat grease. I then ordered some HCS400 cause @Hotshot wouldn’t leave me alone about it. I’m sure glad he urged me to buy it. The stuff is amazing. You don’t even have to power wash restaurants where they have those pure black sidewalks. Spray on and rinse. I just surface clean every now and than just to get the dirt up.

Speaking of BD200 - Had my carrier I use on my truck for when I carry my larger SC stood up against wall of shop. Came in a couple of weeks ago and being lazy and putting up where it goes, set pump up of BD200 down on it. About a week later noticed this white buildup on my carrier, guess pump up leaked or something. Decided I should rinse off. LOL stuff literally ate the aluminum up on the carrier. This was in a week. 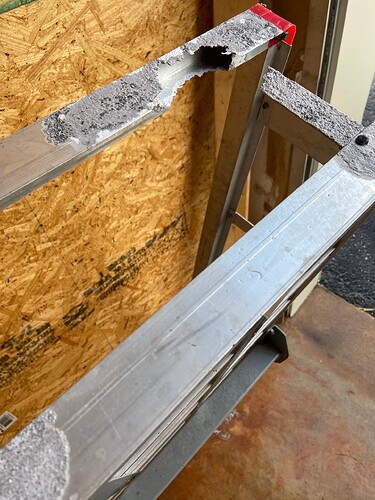 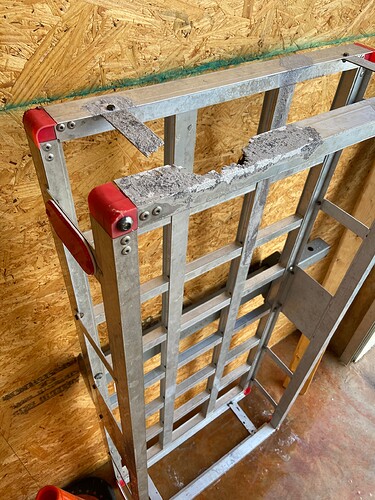 Oh damn! That stuff is strong

Lol…good thing it wasn’t hcs 400 or the whole thing would’ve been gone. When you mix it up it almost melts the plastic bucket. No kidding either. I guess the pic above is similar to removing aluminum from a crankshaft if you spun a rod. I did that on a small engine a few years back. Set the crank in a container of sodium hydroxide at 8 oz per gallon and it took less than an hour and the smeared aluminum was gone. Pretty neat how it works. Just not in your case…lol