Hello all,
I’m new here and I had a few questions. I orderd and received a new PS 6036KG unit a few weeks ago. The folks at BCE were very helpful in answering my emails that had a lot of questions. The specs I was provided were:

I had some issues and questions.However, I received less than satisfactory answers.

I also had 2 (of 4) no-flat tires that were flat. No action by BCE. They did not respond to email even for a request for how to lift unit off pallet as there were no connection points. I assumed, wrongly, that there would be an eye on topic the burner. Not that big a deal but why no response.

When I finally got an email, there answer was that there was nothing wrong.

Most of the forum threads indicate they have great after sale service. Not forms.

Any help out there?

If you paid by credit card, stop payment. In my opinion they are not a legitimate vendor to buy from. Contact your state attorney general’s office and file a complaint. Call them every day. You got bait a switched, by your description any way.

LOL, I’d like to see their alternate spec.
What you should have gotten is the TSF 2021 pump. See the difference in the charts below.

Also, most HW heaters, even the good ones rarely offer more than 115 - 120 deg temp rise. To get 140 you’re going to need one special built probably. 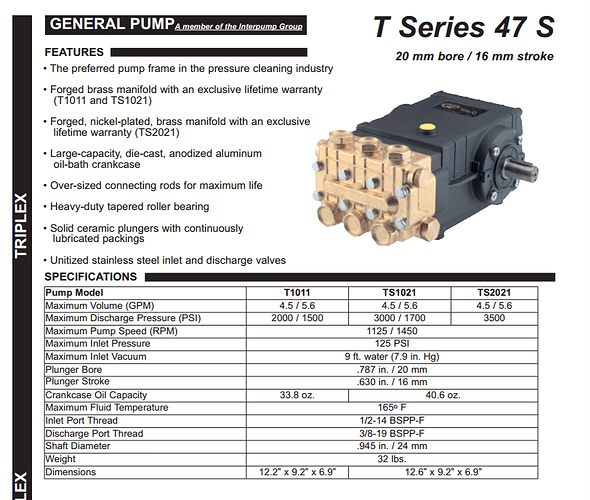 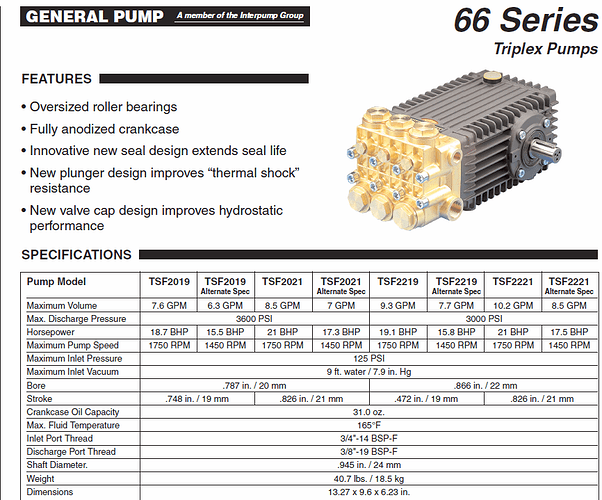 Rick
Thank you for the info. I guess I am old school and if they tell me I am getting a 140 degree rise, that’s is what I expect. The TSF does look like the pump they advertised on their web site.

what size is engine on that unit? Do you have a copy of the ad?

I found machine. That Kohler engine is a great engine - and will pull either the tsf 2019 or 2021. But they are both about $200 more than the TS pump. It’s not uncommon for manf. to call their machines a 6 when in reality it’s slightly less.
Have you actually measured the flow out of your machine into a bucket with a timer? A ot of times the flow will be more than it’s rated for. Like on my 8.5 with the tsf 2021 I actually get 8.7gpm

Rick
Thank you for taking an interest. The engine is a Kohler ECH630 EFI at 19 HP. The claim of 140 rise and 250 degree is in an email from Brian (one of the owners of BCE I believe). I do not know how to send you that thread as I think I need your direct email address. I do not know how to copy it so I could attach to this response. If you are comfortable sending me your direct email, I will forward it to you.
Regards

Some guy in the Pressure Washing Friends Facebook group is apparently a huge BCE fanboy and can’t understand the $1000 difference in “exact same” machines.

Some folks like learning lessons the hard way I guess…

I know that it could never, ever happen but, what if you bought a product that cost $1,000 more and turned out it was actually not even as good. But, of course, that could never happen. Right.
I rely on the claims made by the sellers, unless they are ridiculous. In this case, I relied on the claims of BCE Hydromax and they have not yet delivered. I remain hopeful that they will step up and stand behind their documented claims.