Any of you running the ball valve and the Mosmatic Swivel? I have the swivel, game changer relative to twisted hoses and I like the idea of the ball valve but that seems like a lot of hardware on the end of a wand. Interested to know other’s experience using the two combined. Thanks
I did read the other posts but I didn’t see where anyone addressed using the two together i.e. fatigue, breakage due to whatever variables etc.

There’s a thread on this already with alot of opinion’s/fact’s. I run the ball valve and swivel. I highly recommend that you do the same, it saves time and money. 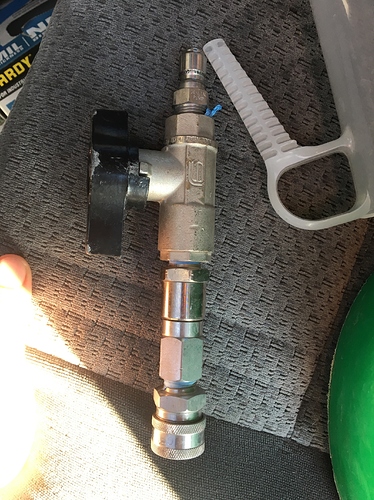 Mosmatic and ball valve here. I just copied @Racer’s with a little @Innocentbystander twist by leading with the male end.

Racer put up a good video on his ball valve set up. Give it a search. There are a couple good posts on the topic.

I mounted mine directly on my hose. I figure one less o-ring to start leaking.

Thanks for the replies. I have the swivel and it’s great. I was just a little put off by the extra steel hanging off the back. The direct to the hose idea seems worth a look too. Thanks for the idea and the replies.

Got my package from PressureTek today and got everything assembled. I’ve just been using the gun that came with my DeWalt pressure washer so far. This one seems much nicer. Thanks @Innocentbystander for recommending the 6" lance pipe nipple. I have...

What are some little things you always forget to have handy that I could get...

In case anyone else was wondering about the yellow gas type teflon tape or tru blue, here it. Just like @tireshark said. Some blue stuff. Some yellow stuff. Then some more blue stuff before it went together. Wiped off the excess that was not on the...

I started using it. Works great! Just need to make sure you seal everything well.

I mounted mine directly on my hose. I figure one less o-ring to start leaking.

Same. Both of mine are on the end of the hoses.

I went a long time without a ball valve until I burnt myself pretty good with hot water. Now I can’t live without it.

Here’s @Racer video and other comments by folks about ball valves as well.