Some of you may remember the thread I posted some time back about the paint on the street in the high end subdivision. Well there is still paint on the new asphalt street outside the subdivision. It can’t be PW without destroying the asphalt. So now they are looking at covering it up. My wife is from up North and she used to seal her parents driveway with some type of black sealant her Dad used to buy but has no idea what it is. I figure some of ya’ll must do that too. So what is it and can it be sprayed on? This would be worth a ridiculous amount of money or I wouldn’t entertain it. Thanks

Basically driveway sealing is a latex paint. It only lasts a couple years. Low spots where the surface collects dirt and water will wear off real quick. Here is a picture of my drive way done just before last winter. This will not fix the problem in the sub division. in my opinion It will be a short term cover up 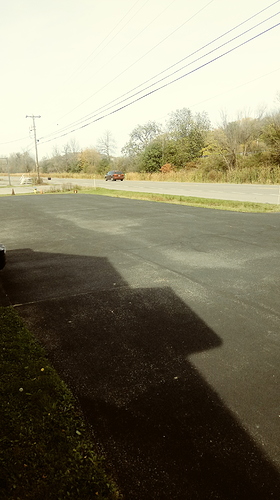 As I am doing more research that is the impression I am getting. Having said that it may be an acceptable solution. My thought is that the latex product would bond with and maybe color the dry wall prep that is on the road. If I can get that to happen they will be happy. This is not in the subdivision but rather a new road. I already PW it off in the sub div but that road was concrete so easy enough to do. Thanks for the input. 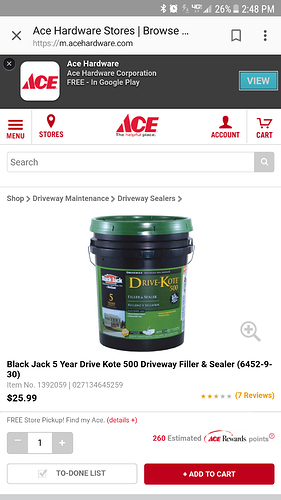 Look at ingredient s… Latex base…

Maybe call the seal coat guys and or some asphalt guys and see if they have a solution. I doubt the seal coat will bond with anything… But give it a shot and let us know after a couple months how it held up…

I’ve contemplated getting into sealcoating, you can use a sprayer or simply dump and squeegee.
I would p.w. that stuff off first, seal might peel off with traffic?
I believe the road is supposed to be dry and free of dirt and dust, so you can use a leaf blower before sealing
Don’t get ANY on the concrete road edge

I’ve been deer hunting and I don’t take the computer. I spoke with Asphalt King. They have an entry level machine that is 799.00. I can buy the seal coat in 55 gal drums. This mess I am referring to is about 2.5’ wide and a mile long so about 13,200 sq ft. The people at Asphalt King were very helpful. Their product is MILSPEC and Federally approved etc. I’m going to do a proposal that will be accepted and therefore be more than worth my time or they will tell me I am nuts and look elsewhere.
Thanks for all the suggestions and replies. I know this continues to be an odd duck here.

Som What was the outcome? Did you get the bid?

Nothing yet but I didn’t expect them to move fast. It’s Kelley Moore corporate but the store Mgr is supposed to be riding herd on the whole thing. That’s not happening. He is completely overwhelmed by the whole thing. I have done all the research etc. This has to be coordinated with the city since the road will have to be closed for things to set up etc. I told him I’d do all that he just needs to give me the POC…crickets. He also knows I’m not doing it for spare change. I’m just waiting on them but I have more than enough to keep me busy. I’ll report back if it comes through.