AR45 purging air out of hose

Beem using the AR 45 for close to a year now and one thing (of a few) that is frustrating is getting air in the hose line. according to the distributors all you have to do is flip the lever to bypass and then back then its supposed to fix it. While this does help it’s not a perfect solution. Also waiting for the air to come out after 300 feet of hose can also be frustrating. Is there an air relief valve for something that I could connect to get the air out of the system faster?

Once you get the air out after the initial install, air shouldn’t be in the system from there on out. Under what circumstances do you get air? I have the same system and I might get a small burp or two if it had been sitting a while

Drawing a soap, Chem or water tank dry will introduce air into the system pretty quickly. We notice it quickly if it ever happens so we can remedy it quickly.

The system is awesome yet always has leaks and problems. I’ve replaced the hexagon covers on 3 sides now from leaks springing from the thick plastic, the short curved pieces that snap together on the far left side have had multiple problems, I’ve also had air leaks from my Midwest XL Hydro mixer from the valves coming loose. Also hoses blowing off. When I first got it I figured out that the best way to turn it on and off is to hold the trigger , but they say if the gun is far away from you to put it on bypass mode. however I still don’t think that is very good so lately I have been reducing the pressure down to nothing before putting bypass mode on to shut it down and start it up. Also I keep it at about 200 psi now unless I absolutely need to go to 300 for reach or more pressure if needed. This seems to keep things from failing prematurely. I guess putting it in bypass mode and back to burp it sort of works but it doesn’t seem to be as good as it should.

That’s strange that you’re having so many issues with it. I haven’t had a fraction of the problems you have had. I’ve had to replace some of the orings in the hexagon “ring” sections but that’s about it. Is something plumbed funny on yours? Did you plumb it?

I got it from espec and I think they rushed putting it together. Honestly I feel like I got a lemon. For the first eight months The pump was attached to the engine and that’s the only thing holding it up off the skid. I had to buy the bolts to attach the brackets and feet that they had sent in the bag separately (why not attach those from the beginning? Now it doesn’t bounce around as much when it runs. I had to call Espec many times to ask questions for things such as how do I check the pump oil. They took the dipstick off and put a bolt in its place. I had to have them send a dipstick just so I could check the oil. I was irritated because I asked them when I first bought it if there was a common package of replacement parts I should keep on the truck for emergency repairs so that I don’t have to wait a minimum of 2 to 3 days to receive parts. I was told that I did not need to buy anything. Turns out I had to buy a lot of things and had to dig to get information on what it was that I needed. Also I am ordering some T bolt clamps today for every hose on the truck (except pressure washer hoses obviously) because regular hose clamps suck. I’ve had three times where double worm clamps blasted off and shot hot mix all over the back of the truck and the landscaping.

Sounds like more of a maintenance problem. I’ve never had a hose clamp come off, but I periodically, about every 2-3 months check all mine. Other than O’ring, only thing I’ve replaced on my pump. What kind of pressure are you running. Most the time I’m at 185-200.

If wasn’t put together wrong. You damaged it by creating water hammers by starting it and stopping it not being on the trigger. The pressure spike that creates stresses the poly diaphragm which causes the leaks. This is the number one issue with gas roof pumps - lack of knowledge causing issues. Also there is no need to run it at max pressure. We operate it at 190PSI and see 12GPM and 68FT on 200ft of 5/8” hose. I run 3 AR’s on our rigs day in and day out.

The recommended startup and shut down method is to be in bypass mode with the trigger pulled. We’ve done this since day one and my original AR-45 has had zero issues.

Blowing hoses off options to remedy -
1 - change hose clamps to t-bolt
2 - use Uponor Pex -A (expansion only) and plumb outlet to reel 3/4” or 1” (we do this for all our AR-45’s)
3- use a custom whip line that’s 3/4 or 1” a half inch whip line would work but reduces flow and increases friction. The quick connects will not blow off.

I will agree my Midwest XL mixer is a huge pain. 7 leaks from it in 8 months. I will never recommend them for anything again. Out of the 4 proportioners I’ve run it’s the only one with issues and they started happening within the first 3 months. I now run a Washtech mixer and remote system. They rock! $1299. This remote system flushes the SH line when in rinse mode. 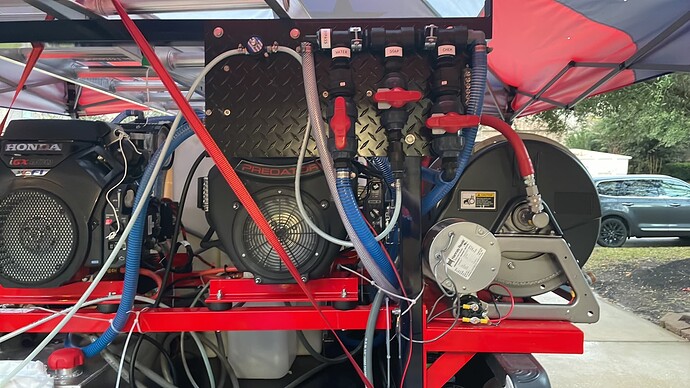 Nice breakdown on system, I’ll file it away in case I ever get one. 1300 before taxes and shipping, man they better kiss me first. Not knocking the product but it seems a little pricey.

I don’t wish you any harm, and you are doing enough business to pay for several of these, just doesn’t work for me and I’m not doing roofs. Be safe, and I hope you make 10 mill this year.

I agree it’s a volume system. We’ve moved to only applying chemicals with them and using 10GPM’s for flatwork. We have a ton of concrete in Houston. A small driveway is 700sq ft here.

Thanks Heath, great info here. Season finally starting back up and I’m upgrading lots or things especially my reclaim trailer (big draught here). I just ordered T-bolt clamps for every single hose I have, I’m curious about the Uponor Pex -A (expansion only) hose. I looked it up on Google but not sure exactly what it is? I have 300’ of 5/8” sitting on a roll I bought last year and going to put it on the 24” Hannay on the reclaim trailer, looking forward to way better flow. Got a huge job starting Monday cleaning two 15,000sf 3 story stucco commercial buildings. I’m going to replace the whip line to 3/4” that’s great idea. Another idea I had was to install a small (maybe 5-7 gallon) tank for the bypass. It’s easy for my tech to set the gun down for more than 5 minutes sometimes and the 25’ bypass hose gets hot quick! Have you (or anyone) ever thought of doing that? After I got the ar system I don’t even downstream anymore. Since it’s all connected to the hydro mixer and frequently I change the strength (but we also do a lot of stucco) but another reason is that it’s a much cheaper machine that my pw so wear and tear is less $. I still use the pw for rinsing, even when working alone I like to rinse with both guns at the same time with 18 gallons a minute. I have this perception when rinsing that it is more than twice as fast as one gun at 9 gpm because their is so much water it falls down harder and faster and needs less in the end. Not sure if that makes sense but after you try it it will.

@Racer I quit using it at max pressure. 180-200psi now typically unless more is needed for reach.

I haven’t considered a tank. Not sure I’d want that bad habit developing- encouraging letting it run.

T bolt clamps are good. Pex works for us.

You’ll see much better performance with 5/8” but that does for air and 12V as well.

I’ve heard of guys running their bypass hose though their buffer tank. Either just putting in and out through the lid or installing bulkheads

I thought about that but then remembered that when I’m running mix thru it it would contaminate the shared tank with the pw and end up upstreaming it into the pw.

My bad on the name. Appreciate your help man you’ve came a long way super fast! I was actually thinking about putting a buffer tank underneath the truck because I don’t have anymore room up top. Maybe you can do it secretly but don’t tell the guys so that they don’t take advantage of it. We try not to forget about it but sometimes it happens. I get a little nervous when the water ends up coming out at near burning hot temperatures.

@TexasPressureWashing I’m talking about just dipping the bypass hose in it to keep it cool. Not letting the two liquids mix

The ar 45 cycles to fast to benifit from a worm. I tried this with a cooler, and my buffer tank. Its not worth the trouble in my opinion

I have just trained the crews to not stay off the trigger with it long enough to need extra cooling. But when you’re washing houses with an AR45 you need to be efficient regardless or you’re wasting chemicals and time.

@TexasPressureWashing you are correct. Its not the same kind of washing. You cant treat it like your ds.

I modified mine over the weekend. I replaced the 200’ 1/2” hose with 290’ of 5/8” and removed the ridiculous flow design it came with from espec. It had a 1/2” whip hose coming off the pump, right to a 90, then the 1/2” by 18” long whip over to an on off valve that I never use, then to a second 90 going down into a block, then a third 90 going to the back of the block and then a 4th 90 to send another 1/2” hose to the reel, which went to a 5th 90! I just bypassed all that crap and ran a 5/8” straight out the pump discharge into the hose reel. Now I only have one 90 instead of 5. 90 extra feet and it feels like I got a major upgrade. Huge reach (hit the top of a 35’ building today with ease using the red gp wash down gun and only 190 psi. Also way more gpm. Really happy with this machine now! Thanks for the advice Heath