I run Amsoil in almost everything I own. My Landa pump calls for 10w-40 non-foaming oil. Amsoil sells and Detergent free non-foaming air compressor oil, anybody using that?

Nope. I use what is recommended by the engineers that designed it

Other than it being labeled as a compressor oil it seems that it is exactly what the Engineers call for.

Here’s what I’m using in my pump. 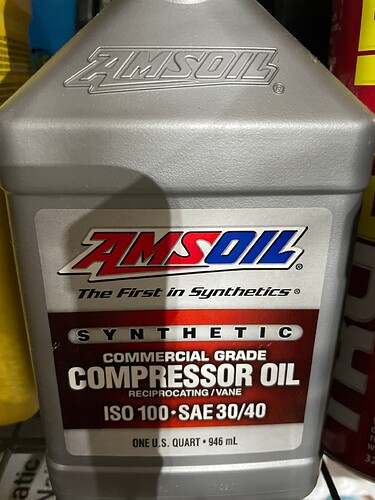 Are you an Amsoil dealer @qons , Do you sell Amway to ?

I remember Amsoil and Amway when I was a young grasshopper, @Racer was probably in his 40’s then, his belt drive was actual rawhide skinned by the Buffalo.

Lol. It’s the only way to flow.

Thats what I was thinking of using.

Lol. I’ll send some your way then.

Amsoil is probably great stuff but I’ll never buy it because the folks that sell it remind me of old west snake oil salesmen.

I’ve heard all the horror stories about using it and the damage because of it, and all the great stuff from it’s cult like following. I just use what is recommended cause I figure if someone in a climate controlled facility, with the best of educations, figured it was the best, who was I to argue. I’ve bought a lot of FoMoCo oil as a result

ford tough baby!
but the any of the turbo engines best get a on time oil change, the engine and turbos share the same oil supply designed into them.

I’ve been using Amsoil for over 30 years. My 2001 Duramax 2500 HD has it from front to rear, it still works every day. It’s much more mainstream now than it was in the 80’s when I started using it. I was a dealer years ago to get the discount pricing but haven’t been for years. I get it at NAPA.

That Duramax wouldn’t care if you put the cheapest diesel engine oil you can buy on black Friday in it. They’re very easy on the oil unlike the Ford’s. I have an 05 LLY myself. Great truck. Did just have to put in a new transfer case from the pump rub issue but other than that mine runs mint at 173k.

Yeah, I have it in my transmission, differentials everything. I’m a believer in it.

I run Rotella T6 15-40 in my LLY and Shell Spirax Allison approved transmission fluid. Both seem to do very well. It’s time to do both the differentials and I’ve actually been looking at the Amsoil Severe Gear because I can buy it locally and seems like most guys like it.