Just wondering if anyone is using a kohler or any American small engine that they like. Ive only used a honda which is really good but i would really like to buy and support American businesses.

Most of Kohler’s engines are built in China. Their Commander series were built in Japan by Yamaha. I run Honda’s. I’m all for made in America, but a lot of our products are not on par with other countries.

Honda has been made in America by Americans for decades.

Briggs and Stratton is interesting. I personally think they made very good engines until recently. The stuff from the 80’s and prior is great. I work on small engines and I have a ton of L Head Briggs motors. Honestly, they’ll run forever as long as you keep SOMETHING in the crankcase. Obviously it’s best to keep good oil in, but I’ve worked on many mowers for people in spring when they can’t get em started (plugged carb) and checked the oil, only to find black sludge. I’ll ask them if they change their oil and they go “wait you’re supposed to do that!?”. I’ll inspect the bore and piston, and they’ll be fine. The things that kill these are way too low oil levels, or sometimes extreme debris in cooling fins causing overheating (and they usually can survive that). I have a 2006 Briggs/Stratton Quantum on a pressure washer (190CC residential) engine. I got it used (free actually, saved from the trash heap. Needed carb cleaned) and the previous owner had seemingly never changed the oil, ran it quite low, and what was in the crankcase was mostly water. I changed the oil and have run it for hours since. It knocks like crazy and smokes, but hasn’t gotten any worse. Somehow with these engines if you catch them before the rod is gone, they pretty much keep running in their current state just fine even if they were on the brink of failure. I would rebuild it, but it’s not worth the time. If it blows up I’ll transplant the flywheel to a lawn mower engine, put that on instead, and keep going. I also have a 1985 Snapper Mower with a B/S Classic 3.5 HP. It has been in my family for its whole life. Regular maintenance always done. It has been used for probably almost 300 hours. These are built for ‘emissions compliance’ up to 125, at which point they’re essentially worn out. It has developed piston slap and burns oil, but it has run for so much longer than rated for that I am impressed anyway.

However recently they have been doing poorly. The Intek motors are very sensitive where old motors were not. I have one on my lawn tractor, and it works fine. However, it hasn’t been flawless. The valves worked themselves out of adjustment and I had to reset them, and the starter motor randomly threw the gear off. It does burn a bit of oil. Minor in the scheme of things, especially because it is an old engine (2005). However, others have had worse experiences. Their new OHV valve engines for push mowers are sad. They seem like Briggs looked for the lightest gauge metal possible to hold up for a block, and tried to make the OHV piece as small as possible. The carburetors are plastic, with tiny tiny ports that clog easily.

In summary, if you want to get American engines, find a B/S from 15+ years ago and you’re set, or get a Vanguard. Those are still good.

On a side note I have never dealt with Kawasaki, so I have no idea how they are. I understand they are generally good engines.

Your right but not contractor grade GX series motors only the GC and GS series home owner disposal series.

I primarily run a briggs 2100, has been really reliable side from getting bad gas in them. I really live it, and its from I think '92. Its 420cc. Ill truly be sad if it ever gives up thr ghost, BUT! Ill try to rebuild it. Id do have 2 kohlers, a ch20 and a ch25, but havent given them the runtime yet.

This is sad that kohler is no longer made here. They have several manufacturer plants here but i guess the small engines are now made in china as ibs said. Im aware honda makes engines here in USA but not American owned just a subsidiary company but still good that americans get work from it. Never been a briggs n Stratton fan but i will definitely look into the vanguard motors. In my parents day America led the world in industrial and manufacturing products. Here we are in a pandemic relying on china for medicle supplies, smdh. It does seem like American companys are joining forces to get the supplies we now need. Hopefully going forward we can all learn from this and bring American made back on top. Just my 2 cents worth

It’s all corporate greed. I read somewhere that if the iPhone was 100% made in America with no chinese connection the retail cost would only be between $2-3 higher. Corporates really know how to clean the bone. 2.2 billion phones sold to date.

Most of the Honda’s sold here in America for the Outdoor Power Equipment (OPE) industry comes from China, Japan, or even Thailand. You can determine country of origin by understanding the serial number break down.

In my opinion, Honda, Kawasaki, Briggs and Stratton and Kohler all produce some great engines, but they also all produce some crummy ones. Just as everything else it seems like today, someone figured out how to put a reputable name on a piece of crap and sell it to mass markets for to make a dollar. John Deere, Craftsman, CubCadet, Toro, were all solid names at one point, but now you have to really careful and do your research if you intend to purchase one. Same with the engine manufacturers. Briggs and Scrapiron has a small engine that they state “Just check and add” in regards to the engine oil. The engine actually is designed to consume oil quickly so as to prevent you from ever needing to change the oil - but you’d better add oil to it routinely. Kohler Command series where usually solid with a few exceptions. The Courage is another story. We had a running joke on the sales floor that it takes a lot of courage to buy a Courage, so buyer beware! Generally, Honda and Kawasaki where the preference amongst OPE end-uses, but Honda is much more widely available and they also have a decent chunk of the market in these smaller engines. Kawasaki is a great engine, but unless you have a local dealer that is going to support you, I wouldn’t get one for the power washing industry.

Buy a kubota solves all problems.
Run it 20000 hours . Rebuild it and run it another 20000 hours. By that time you will be retired

Buy a kubota solves all problems

I took your advice on the diesel @florida_condo_cleani 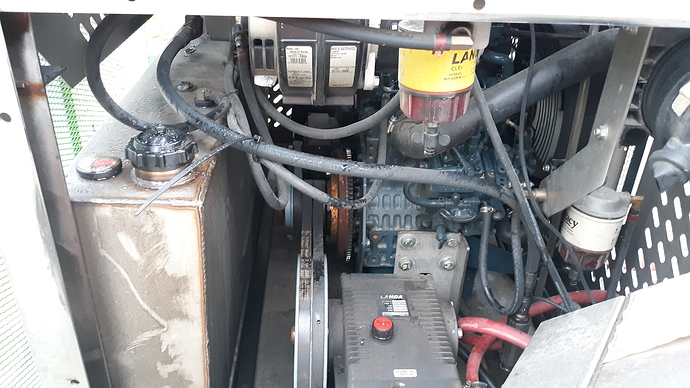 Keep good fuel filters in it 2 micron and good oil it will last forever. Now your stepping into tru commercial equipment

I have one Honda, everyone knows their story and two Kohler Command EFI engines, a 23 hp and a 19 hp, they sip fuel and run great until they don’t. Beyond the basic suck, bang, blow EFI requires a computer to trouble shoot. I have replaced the fuel pump on the 23 twice in 2 yrs and they are not cheap compared to buying a carburetor.