we will be working residential and “light” commercial flatwork cleaning with an 8 gpm machine with city water pressure. I can find the following storage tanks available locally, 65, 125 and 150 gallon. We will not be operating off of well water. Would the 65 fit the bill, or do we need 100+ gallons for the 8 gpm. Thanks in advance.

IBS gets by with the 65, but he works off hydrants.

I think you would be okay with the 125…just keep it half filled to give you something to start on while it is filling with the customer water.

I have a 225 with my 8gpm machine and it is probably more than I need when on city water. BUT…a lot of my work is on wells and I need it there. When working on a well, I usually start with it half full and it will maintain pretty well depending on what I am doing. Only once, have I had to stop and wait on it to fill…but there have been several times that it was pretty close to empty by the time that I finished.

Thanks. I have a single axle so I wont be transporting water.

Thanks. I have a single axle so I wont be transporting water.

I have a single axle, also…it handles half a tank (110gals weighs about 800lbs) with no problem at all.

In your case, half a tank of water will weigh less than 500lbs…that would be no problem, at all.

We will not be using hydrants, but that is something we should probably look into. The county provides a water meter that bills without sewer since it does not recover the water for treatment. However, in our county, hydrants are 1000 feet apart, which is a lotta hose!

I have a 65 gal tank with,my 4 gpm machine. I have run low on water a couple of times at houses with city water… Usually because they have. A corroded pipe or a faulty hose Bibb… But most of the time it is ok. With an 8 gpm I would go with a 125 gallon tank. I use single axle trailers with electric brakes, never had a problem yet. Knock on wood…

I have a 225 gallon tank running a single 8GPM machine. I installed a Hudson valve @125 Gallons. Haven’t ran into water shortages as of yet though I don’t deal we don’t usually work off wells too often. I honesty think i have too big of a tank for what I need. I would say you should be fine with a 125 gallon tank.

I have a 330 and even when I let it fill to 250 before I start I have to wait on water sometimes. Especially if doing large drives or parking lots. But when I work I stay after it. I may run 30-40 min w/o hardly ever letting off the trigger. So if you’re running a 5gpm deficit, which happens fairly often, if you don’t have decent sized tank, you’ll be waiting.
Remember too, you don’t want the tank getting too low because even with 10-20 gallons you may start to get cavitation. The other problem is if you’re parked on a hill or slope is wrong on street can cause you to lose some capacity. So get the biggest tank you can fit on there. Even in the same neighborhoods a block apart, one house may have 7 gpm flow and a block over may be barely 4.
It’s a big enough problem, even with my size tank, that I’m going to build me hydrant piping on my trailer this Winter.
If you like to screw around or take a break every 15min, then disregard the above. You’ll be fine with something smaller.

So it looks like a 125 gallon tank would run over $340 ! Yikes!
I have a 5 X 10 3.5K trailer.
I can get a 275 IBC tote for $100
Which would you choose?
I am not transporting water, and it seem both tanks have a four foot footprint in one direction.
Would you put in a float valve and fill to 150 as opposed to a 125/150 tank?
Thoughts?
Seems the IBC bottle is SO much cheaper that all the leg tanks, and if I don’t travel with slosh, it seems like a better deal.

If you are not going to travel with water get a 25 gallon tank. Square totes are unsafe to transport the way most guys secure them 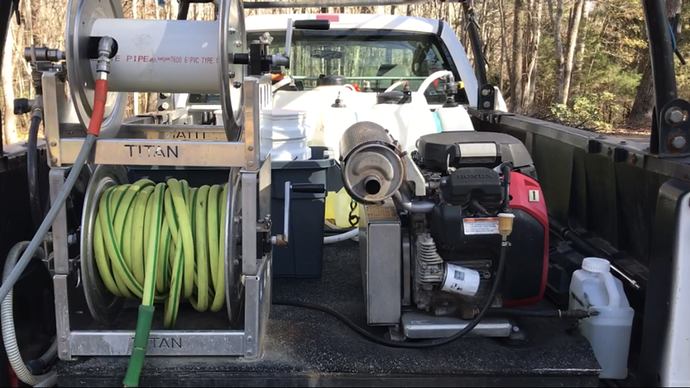 What is the point of having a big tank if you travel empty? Get to the job and wait then drain the water so you can leave? Use a small tank and wash when you get there or buy a leg tank that allows for sloshing water better

What size tank and gpm machine do you run?
Just curious.
What do you do for a sidewalk HOA without water hookup?
Just thinking, and trying to weigh the advantages/disadvantages of a $350 125 gallon leg and $100 IBC tote @ 275 gallon. I assume an IBC tote would need a hydrant permit and meter for sidewalks,

Guys, y’all are making this too complicated.

125 gallon leg tank will work for most anything that you want to do…and it will be secure while half full of water provided you use the factory mounting kit to secure and not ratchet straps. The mounting kit is sold separately…so there is an additional charge for it.

The IBC tote will work…to be safe, the base has to be BOLTED down and not secured only with straps as most guys seem to do. Go look at Racers video and secure it like he did…and the tote will be fine.

He talks about securing the tote at 13:00 in the video.

Look for a used 125 gallon tank

The tote will take up a lot more space than you think, i went from a tote to a 125 gal and saved about 1 1/2 feet. Which was enough to add an air compressor for my roof set up. Also you dont really want to fill up a tote as you may bend your axle. And yes float valve should be on all water tanks.

As for going to an even smaller one (25-65 gal), i wouldnt. It really depends on what the average gpm at the spigot in your area is, and how much flat work you do. For house washing your not on the trigger all the time so it gives the buffer a chance to build back up. But for flat work you will drain a 65 gal tank quick ( at least in my area). Even with my 125 gall when i have both my machines on 9.5 gpm it only gives my about 20 ish min of run time. This is also why i carry a second supply hose so i can hook up to another spigot and not worry about it.

2 eight gpm machines per truck. 65 gallon tank on one. 125 gallon tanks on others. Hydrants