Sat down with a CPA yesterday

Business dont need to make money as long as you do.
If you loose money for over 3 yrs it raises flags.
Thars what my cpa told me a couple of years back.
I use Excel with formulas, just like quick book does.
But it is on a HD.
No sense in paying QB

0% is nice but I’m a firm believer in having no payments. I haven’t had a vehicle loan in 20 years until two years ago when I had to replace all my trucks in one week. One day I’ll spoil myself with a new truck but I’m holding out for a 71 Mach1 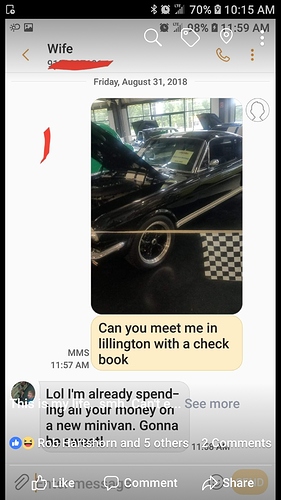 I’ve been carrying my permission slip for 5 years lol 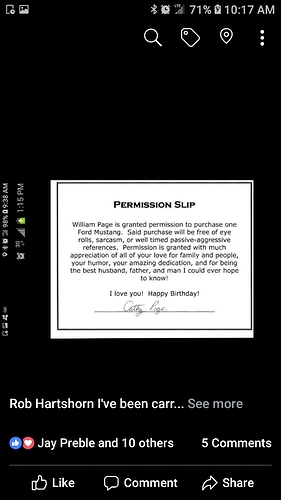 I sure hope there’s no expiration date on that certificate

Me too. She thought 5 or 6k was a lot for a used mustang. I’m wondering if 50k is enough so I’m a a self imposed buying freeze. She says do what makes me happy but I’ve been married long enough to know to wait lol. In the mean time I don’t feel guilty buying guns and trivial many toys

I’m sort of the opposite. I refrain from buying most smaller toys, so when something big comes along that I really want, I have an easier time justifying it. That doesn’t mean the money’s always there when I want it, though

This is my first time having payments. I’ve always thought it just wasn’t smart but I got a good deal on this one and at the moment don’t regret it. We will see how I feel when it gets paid off lol. My weakness is a new Ford F-450 Platinum but I just can’t justifying it. I don’t need a truck that big and that’s a big payment. My current payment isn’t even $300. I owe just over 18k on a truck that still books for over 40k. I think I’ll be okay considering it’s the only payment we have other then the house.

Yeah. Back to the original topic:

One thing that held me back from exploring the s-corp option sooner, was my impression of what a “reasonable” salary was for my position. According to the experts, that threshold is much lower than I thought. Personally, I can’t imagine getting someone to do everything I do in a year for only $35k. But that amount or even less is acceptible to the IRS, dependent on the business. If I was running a $1mil company and tried to take only a $35k salary, then I’d be in hot water for sure

Never heard that argument.
IRS dont care as long as you pay what u owe.

Skip down to the example of Dahl. He was taking a salary and distributions, but the IRS determined that his salary compensation was unreasonably low for the profit his firm was making. So he wasn’t paying his fair share of SS tax.

That stated that way makes sense

Did you catch the fact that he was a CPA? Thought that was rather ironic, and illustrates the importance of being somewhat educated to begin with before seeking the advice of an “expert”.

The best choice of entity depends on the situation. For our circumstances, I’m confident we’re going in the right direction with an S-Corp. For someone else, a C-Corp might be better.

Ironically true
Best to hire a retired IRS auditor…lol
But he knew what he was doing… intent, that is what i perceived.
Kids should be partners.
And a lender partner that is given interest on his return…

A really good guy I know has a roofing company. He’s had it since 1993. A couple of years ago, he got hurt, but not enough to stop working. He just didn’t work as much and lost a crew in the same year. So he showed a loss after multiple years of making money. It cost him $20k to hire a couple people to help him work through the audit so the IRS could say he was right.

He said they basically had to convert his home garage into a space those two could go through his records. Then they told him he needed to buy them more printer ink. I’ve never seen someone so close to breaking in my life.

I hate the IRS/taxes with every fiber of my being… but I don’t poke the bear.

Congrats man! I love it! That’s a sharp truck. Good for you…

And I know I don’t need to tell you, but to anyone else reading this listen to your CPA… not to @ikii… the same guy that says he never drinks water in one sentence then in the third tells you all about drinking water.

And definitely never trust the guy with a tape measure.

While we’re at it.

Yes i am not a CPA, so dont take my advise.
I agree with that.

I dont drink water, only when i eat out, cheaper than soda.
Other than that i only drink milk, what is wrong with that.

And yes i made a mistake on the hose diameter.

And yes i made a mistake on the hose diameter.

Nothing is wrong with it. You say some silly stuff sometimes. That’s all. Lol

I’m just sitting here trying not to pee myself. I told him I wouldn’t call him a liar for awhile, and from a left field in Missouri, BAM, right in the kisser. LOL. I have an image of Lucy at her psychiatrist stand, but with Jamie behind it, a CPA sign advertising advice for a nickel and a gallon of milk on the table.

Lol…now that is funny