Not surprising at all! 3 days after a certain person shows back up on this forum, and 20 minutes after calling him out, I receive my first bad rating on google from an obviously fake account name that I’ve never done buisness with before. This is the kind of trash that 12 year old children do. But… I unlike said trash am open about who I am and where my buisness is located. I do however feel it should be public that this is the kind person your taking advise from and giving a second chance. Way to raise the bar you peice of garbage. 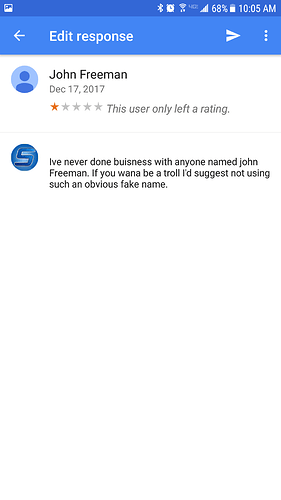 Yikes… that’s pretty slimy if true. Can you dispute it in google?

I’m not sure. Idk if I even care that much becuse it was bound to happen eventually anyways. Just would have been nice if it was actually a client so that I could rectify the situation, instead of a child masquerading as a buisness owner.

Since I stepped on a couple of toes I am,now getting some thumbs down on my videos… Not a big deal, it actually is funny because they don’t even leave a comment… The best part is I got two on my vid of my new puppy… Who thumbs down a puppy??? It is pretty entertaining…

Who thumbs down a puppy???

The lowest of the low.

I personally would never give a bad review to anything that didn’t deserve it… but then again I have integrity. Must be a pretty pathetic life to live that you have to try to impress strangers on the internet with lies, then lash out when they don’t fall for it.

Yikes! - So whats going on here? Can someone one sum it up for me? thanks

Yikes! - So whats going on here? Can someone one sum it up for me? thanks

@sharp is claiming that I made a false review on google for his business.

Which there is no review there that I am aware of and did not do this.

Kid comes back after being banned. Doesn’t like that I’m still annoyed by the way he acted that got him banned. 20 minutes after I have a bad review on facebook. Either he deleted it or Google did. I have a ss of it. Fisrt he said I lied about it. Then he said I photo shoped it. Idk what he says now becuse I’m done participating in garbage. 3 days back for him after being banned. Already starting bull. I wonder how long it will take him to threaten to sue again.

Do you not have insurance?

That’s the part of the post that prompted him to do it.

Everytime I come back here there is some additional bullshit lol. Seems best way to use forum without getting a headache now is lurking and it still hurts.

Everytime I come back here there is some additional bullshit lol. Seems best way to use forum without getting a headache now is lurking and it still hurts.

Dude I can’t even post on here with someone calling me trash or posting memes about me being trash or posting pictures of balloon animals asking for my address. Even when I offer advice that I know very well, I still get shit for posting about it.

One person even got upset that I was posting to much, even though my posts were directly related to the thread.

It’s getting really old even for me. Read through the posts since I have been here and see that @sharpe is constantly trying to provoke me.

I admitted my wrong doings, but this is just stupid. How can @sharpe be allowed to bully someone on here? What is even worse is that people like @Innocentbystander refuse to acknowledge that it is bullying. I stopped posting yesterday and have only posted to things related to this topic. After this situation is resolved I will go back to lurking.

Oh and heaven forbid someone wants to create a youtube channel and demonstrate the knowledge they learned here and then post those videos here for people to have a walk through guide. Seriously what the hell is wrong with some of the people here.

Lol your pretty good at playing the victim. You should do theater. You shouldn’t be posting you were banned. Also @AquaTeamPowerWash sorry to clog up the works with bs. I decided yesterday evening to stop responding period after @DelMarProWash had his thread ruined. The only reason I starting talking about it again was becuse @Chris asked. I probably should have just let nature run its course and let someone else deal with him this time but I’m hard headed. I just don’t want to see it get to the same place it got last time. Again sorry to clog up the works and best wishes.

Lol your pretty good at playing the victim.

You have been posting memes calling me trash and other names. So yes, I am the victim in that stance.

Did I act immature when I had my last account? Yes. I apologized for my actions. You should do the same.

I am sorry for calling you a carnie. I know it is a sensitive subject for you and people who work at carnivals are no better than myself.

Please apologize for calling me trash and a clown.

I take it all back. Your so super awsome I just cant stand it sometimes. Your just awsome. Thanks for being so awsome.

I take it all back. Your so super awsome I just cant stand it sometimes. Your just awsome. Thanks for being so awsome.

I am sensing sarcasm here. You also did not say you are sorry.

For someone who claims that others are acting childish, you are seeming to show a lack of maturity here. However being the more mature person here, I will accept your apology and let you move on with your day.