Just wondering guys, why aren’t we referring people to https://shopwindowcleaningresource.com/pressure-washing.html

The prices are bonkers and I like building a relationship with one supplier. Pressuretek has my stuff to me in 2 days. They haven’t let me down and I’m a loyalty guy.

I’ve also been referred to Pressuretek by some of the guys who I really look up to in this business. When I was growing up, when you wanted to be like Mike (Jordan), you bought Nikes. Kinda the same deal.

I just got my elemenator and my 100’ hose so damn fast. Pressurtek has my business for sure. I need to order some quick connects now, some Hydroxide, and some brightner next. Waiting until I do another job so that I don’t have to pull out of pocket. I want to get started on fences and decks soon.

Are you a wcra member? Shipping is free after 99 bucks and you are getting a discount on the equipment. Are you including the price of shipping when comparing prices?
Delivery usually only takes a couple days.

This is what has me asking the question in the OP.

I had no idea. I’ll give the store a 2nd look. I am a member of the WCRA and I respect @Chris a ton.

I do buy things from atcost printing. The one thing I would disagree with is promoting a free forum as a place to grow your business and learn new things, but then get mad when we don’t buy the products to fund the forums when no one really knows that’s how it works in the first place.

I’ll buy some stuff from the store on occasion now because the forums have been super helpful now that I know.

Rest assured, the OP isnt directed towards you or any one person, as other sites are often referenced for purchasing product. In fact, Chris’ post was an eye-opener to me.

@Jordie, I know it’s not. And I like dialogue like this. I’m glad you asked the question actually because I had no idea either.

See what I mean about the prices? Maybe it’s free shipping after $99, but if I order 4 or 5 more things like I’m inclined to do the difference in prices compound.

There’s a 25% disparity in the prices here. Bonkers. I’d rather donate $150 to the forum and call it tuition. But like I said, I’ll buy things from the store. I’ll pay my $300 or whatever the dues are this next year. I’ll buy stuff at the convention today. I appreciate the forum, but as a business owner worried about cost control, a 25% disparity in prices over 5 or 6 items per order, per month or even quarter is a huge hit to the P/L.

I completely understand the logic. As a new power washer, I’m blown away by the costs compared to window cleaning. Yeah, the money is better but like someone said here, they have enough extras to start a whole nother business, which is kinda necessary, so as not to be stuck on a job. Greater costs.

The first 2 examples you gave shake out like this for me with shipping to MA from pressuretek: 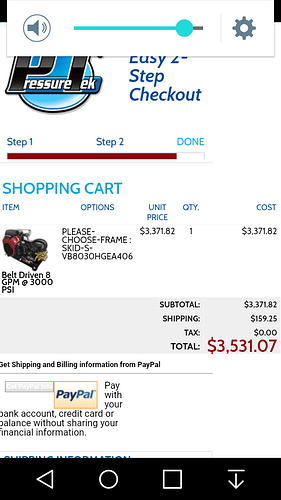 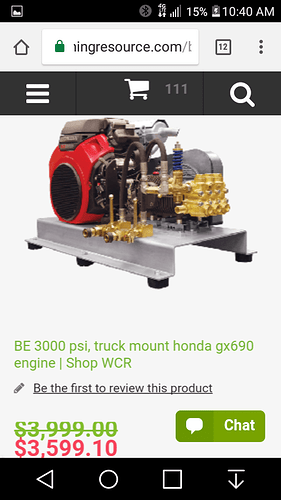 Granted, you wouldn’t be buying just the skid, so maybe you do make it up compound.

But you may also deal with issues such as this:

Can I reach a person at PressureTek?

I’m calling their number but just get a recording that says they are closed or it’s cyber Friday. Any idea how I can reach a person?

The customer care here is top notch, as well as accessibility of staff.

@chris did emphasize it wasnt about purchasing, it was more about recommending.

This may be a good way to get feedback about making this store more appealing. Thoughts?

The money is WAY better, lol. I contemplated really digging into the window cleaning side, but it’s just much more work for smaller tickets. I’ll keep it as an add on service but I couldn’t fathom doing standalone window cleaning. Maybe I’m just doing it wrong lol.

Since you mentioned it I’ve been looking at the WCR store quite a bit. Maybe I’m an old soul, but I’m not super good at this computer thing and I felt like the WCR store is a little clunky, sometimes hard to navigate.

That being said, I compared a few of the prices and with shipping you’re absolutely correct. Prices seem to be similar to Pressuretek. I’m going to ask the guy who I subcontract all my window cleaning through who he uses for his supplier. If WCR offers gift cards/certificates I’ll pick one up for him as a thank you for doing great work.

Also, I meant to buy a Moerman Excelerator (sp?) at the convention, but there was a ton going on and many of the booths were swamped. Big crowds aren’t my thing. Anyway, I’m gonna order one for my window guy to play with and test and see how he likes it. Then I’m gonna make him show me how to use it. i don’t intend on getting back into window cleaning myself, but I still like the art of it for nothing more than it’s kinda meditative.

Anyway. All that being said, I think I figured out why more people in the PWRA don’t know more about the WCR store.

But new guys who join the PW forum show up to the main page and there’s a pressuretek ad. They don’t travel to the forum via a page with options like windowcleaner. 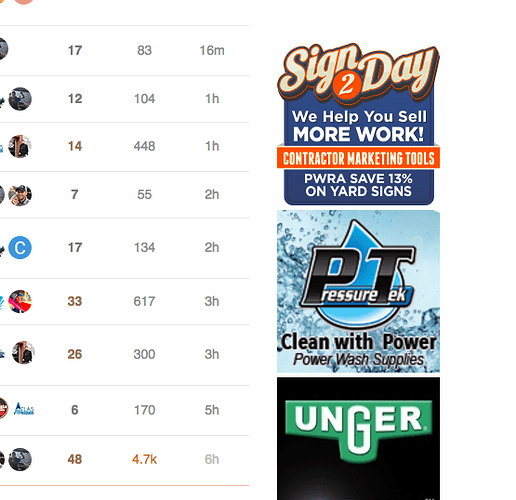 Awesome Rowdy! Thank you for that feedback.

As far as the Excelerator goes, i would recommend buying the 14" because it is the most versatile (resi/storefront) but if he does mostly resi, the 10" is good too.

i have an ongoing series about it and the Liquidator. Check it out:

This isnt true. I dont get mad at all when people dont buy from us.

After rereading the posts I think I understood it was about at least recommending WCR and not plugging competitors and not so much the buying.

Chris doesn’t get mad. Well, maybe at me sometimes lol

Well, maybe at me sometimes lol

@squidskc you are a pro, can any of the chemicals you use be found in regular stores?, like HEB, Lowes, northern tool, etc?, or are those only by online payment?

Not to step on Brodies toes, but generally speaking, all the chems we use are either raw and require mixing or they are specially formulated for what we do. For example, we use sodium hydroxide to strip decks. Some of us order it from PressureTek where it’s called F18. But we have to mix it with water to the proper ratio for the job we are doing. If you go to a big box store and buy some deck stripper, usually the active ingredient in it will be sodium hydroxide. We buy from suppliers specific to our industry because it’s much less expensive to do so and we can mix what we need on the fly for any given job. So yes, the chems we use are available at big box stores, just in different forms and at much higher costs.