So I am trying to figure out what is going on with my surface cleaner putting out too much pressure. So I put a ressure gauge before my gun to see pressure. Ran it with an m5ds on the 2315 gun, the three tips pictured, shut down, replaced suttner2315 with a 4’ lance and used same tips. In the other picture here you can see the guage no longer works.

readings were 22-2400 with m5ds on suttner, 4000-4500 with the tips in the suttner, with the lance on the pressure climbed very high with the same tips in the lance. THen the gauge stopped working. What do I do now? I have one more gauge but I don’t want to trash that too. Do I restart by redoing the unloader? It was set by the factory.

I was spraying goose crap off my drive, those things are flying crap factories.

I also made up a ball valve for my surface cleaner so that I could switch from SC to lance, but it kept blowing out the o ring on the quick connect, whats up with that? Just an FYI for those who would want to know, all my stuff was bought at pressure tek for the most part, that and BCE 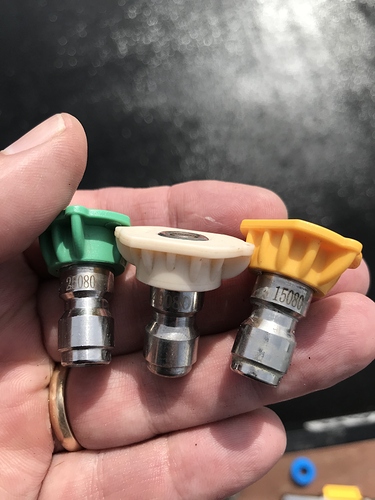 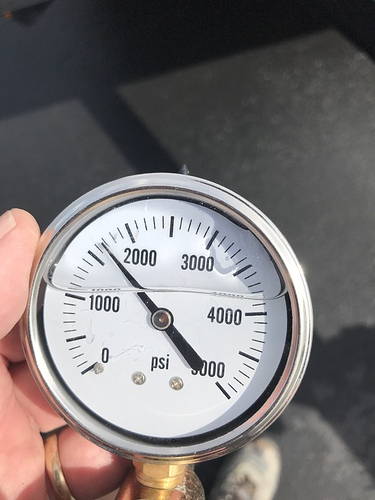 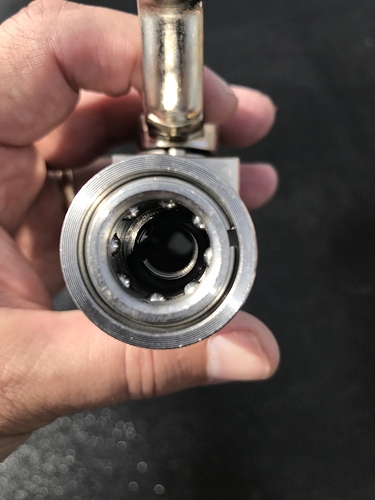 We need to know what machine you’re running and how long the pressure hose is.

I would adjust the unloader. Start with a trickle of water coming out of bypass when on the trigger. How much hose are you using?

This is an alleged 4k, 8gpm, hot/cold machine. I am using 200’ of hose, with an 8 or 10 foot jumper between machine and reel. I really don’t understand why the pressure would jump so much higher when I switched from a regular gun to a 4’lance. I think the lance is what caused the guage to break, it pegged over 5k, but that could just be a faulty gauge too.

What is the problem? An 8gpm with a size 8 nozzle should put out 4000 psi if you have enough horsepower to push that.

Thanks. What I don’t understand is why with 200’ of hose (300 psi loss per 100 feet) the pressure would be above 4k, and I really don’t understand why a lance would change the pressure at all. It was very noticeable, as soon as I was turning it on it felt more like the resistance you get from a firehose (not quite that much). With the m5ds their is no line resistance, and I selected the m5ds for a 3-7gpm machine as per a forum members recommendation. Once again, maybe the gauge was messed up to start. The tips I used came with the machine, rather than the megs I purchased.

You want the m5ds to be the one for 7-12 gpm. You may be referring to people using undersized injectors. I use a 3-5 gpm injector but if you use an undersized nozzle the pressure could be too high to draw soap through your injector.

I would make sure you’re rpms for the engine is at 3600 if it’s a gas engine, then set the unloader, without the gauge. Then if you’re really concerned about psi buy another gauge.

What kind of engine is on your machine?

honda gx690, ill recheck with the other gauge today. I’ll check the engine too, that never occurred to me.

yeah, that was beat down my throat by several posters. I just report the listed specs from the manufacturer. I didn’t get to test it today, I wound up painting. Thank you for responding.

I guess the first gauge was just messed up and I got concerned about nothing there. Now to figure out the excessive pressure on the surface cleaner.