I saw a guy on facebook tonight loosing yard signs and he asked about booby traping them with razor blades or someting that would blow up disturbing them. Really? Such coule be considered terrorism to the public and someone could get hurt bringing federal charges. WTF is wrong with people. Yard signs have a short lifespan. People are crazy. Youre gonna hurt someone over a sign with your phone number on it? Im gonna leave all those facebook pressure washing sites. Absolutly nuts.

2 knobs: One turns the radio off, the other changes the station.

and some people have one on their shoulders…

FB pressure wash groups are where the hick meth addicts go once they buy the 4 gpm dewault machine and slap a magnet sign on the tailgate of their rust bucket F150 and declare themselves “pressure washer.” Ignore those places. Come here instead.

I poop you not, home owner was happy to have me out. Previous pressure washer OD’d in the drive. 2.3 gpm unit still at house.

You get less of that with 4gpm guys and never with 8gpm guys.

I feel personally attacked with my red 2004 f150 and brand new 4gpm BE Commercial pressure washer. Did you just gaze into my soul and find me wanting?

To be honest I’ve gotten some good information on YouTube. Haven’t messed with Facebook at all. A lot of those YouTube guys seem to be histrionic cult leaders peddling their get rich quick courses online.

Give me a cantankerous IBS or Displaced Texan post over those chuckleheads any day of the week. Those pay to win Facebook groups and YouTube guys all working together to take money out of people’s pocket. Seems pretty predatory to me. That’s as a new outsider looking in.

Everything you said is 100% spot on. All these guys on here are great. Racer is top dog as many old timers have told me they take his lessons to work everyday. Dude has a 2.5 hour video on cleaning a driveway. The master. But yeah, its nuts to pay for pressure washing school. There is a lifetime of stuff to learn and any newbe should do 1000 hours of youtube and reading study. To much can go wrong. Youre spot on.

Well, thank goodness the 2018 F150 I have can’t hold a magnet…
But now I feel obligated to go pull the DeWalt sticker off my washer’s air cleaner cover now 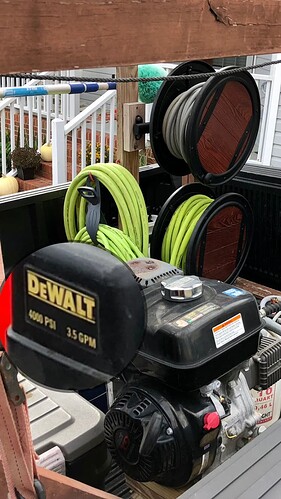 Thats a good pressure cleaner bro. Will make you bank. When you go bigger youre gonna need a tank. Nothing wrong with that. Its built by Simpson not Dewalt.

Thanks Steve, but DeWalt pressure washers and Simpson pressure washers are owned by the FNA Group. I had to dig that up last year when I needed a water inlet piece for the AAA pump which was easy to obtain once I got to the bottom of the rabbit hole.
No plans to upgrade the washer anytime soon as I’m already into my fourth year with it and it’s still doing exactly what I need it to do. I’ll have to cross that bridge when I get there, but when this thing dies, I’ll probably get something similar in size as I just don’t want to deal with the buffer tank and bypass stuff. Not that either of those are bad things, I just like the simplicity of my set up; less parts = less headaches

Has the AAA pump been ok for you? I baby mine and so far so good.

Hasn’t failed me yet

Everyone on the Facebook pages are making millions pressure washing. Just ask them. They also regurgitate the same 10 facts for every problem. You can easily tell that most of them have never encountered the problems they are offering advice on.

Yup. Lots of guessing and yes easy to tell.

To make millions you have to have an aluminum skid, a $4k 12v pump, some pink dye and hydrogen peroxide.

I just want to make hundreds of thousands $$$.
What do I need for that?