I called and talked to Randy from BCE Systems. We talked on the phone about the DC8540KG system 12v option. He’s going to install the ZK1 unloader and have his weld guy put a rain shield on the heater exhaust since this unit will be on an open trailer.

For the people who own a Hydro max, based on your experience, is there any other modifications you would recommend having done to the unit ? Those models with the ECH749 Kohler are built to order.

These are great units so there might not be much more if anything to modify in reality! It’s my first 8 gpm hot unit washer. Figured I’d start a thread on these great units for further discussion

I put on myself some gas and diesel shutoff valves.

What drove you to do that besides obviously being able to shut it off? Lol. Was it for winterizing or maintenance?

depending on how you place the unit on your trailer, the unloader hose is a PITA to get to for me when I disconnect for every freeze. The only other thing I didn’t like, and it is minor, was the holes in the skid. So small. I wound up finding better bolts for mounting.

Oh yeah forgot to mention, buy some additional fuses. I had two go since I got it, but mine sits on an open trailer.

I ordered my new Hydro Tek with the k7 love it!!!

You should talk to @Racer he is big on the BCE units, I think @marinegrunt got one too.

I’m sure they will find the thread and chime in! Racer gets bugged enough about his unit lol. I’m sure he’s tired of being asked about it!

I asked Randy about mounting and he said they normally just use 4 grade 8 bolts, one on each corner with large washers and it holds tight. Hard to believe since it’s 600+ pounds and around 800 or so fully fueled. It’s also taller then it is wide. Wondering about other mounting methods.

What do the fuses go to?

Get something bigger than a washer on the bottom side so that you’ve got 2-3 boards securing it in case of a wreck. IBS suggested old lawn mower blades. I save my old edger blades now. Just get you a piece of flat steel to bolt thru on each corner.

The only other thing I can think of is get them or you can do it, it rig up a bypass of the heater, so that if you’re not using, don’t have to run the water thru it. Like having another 100 ft of hose almost when you figure length of coil. I didn’t on mine because of where it’s located, wouldn’t ever use, but on a trailer I would.

That’s a good idea, I might do that on mine.

Great tip. I’ll mention that to Randy and see what he has to say

But I have to wonder, if I run water through the coils of the heater then bypass all my water for let’s say a month, wouldn’t that cause the insides of the coils to rust out or degrade in a way? Because I’m not flushing it out constantly ? Or am I overthinking. That’s a high possibility lol

Some of the coils made are stainless steel others are just steel, so…

@DJPWS I absolutely love mine!!! I’ve got the 6gpm 4000, hey man since your already talking to them would you mind asking them a question for me? It keeps slipping my mind during the day when there open.

I’m just curious if they would sell me one of their stainless skids with the gas tank…I like the setup so much i want to put my honda 630 with the gear drive udor pump on one. 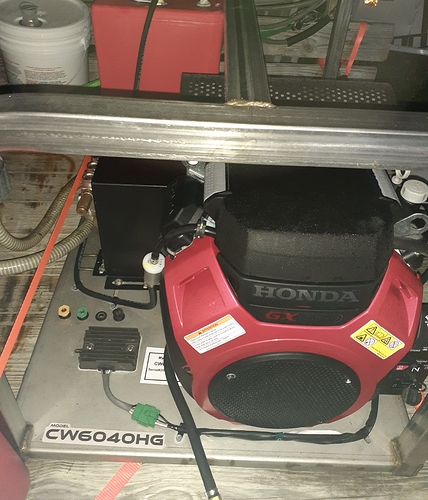 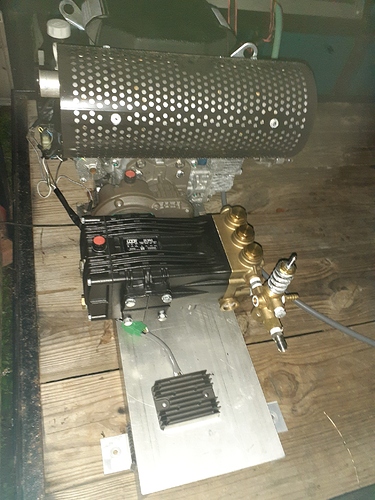 Some of the coils made are stainless steel others are just steel, so

Oh you’ll know if there SS , just look at the price tag.

right behind the ignition there is a fuse in a (I don’t remember what it is called) plastic contraption. I went to start mine and thought the battery was dead, It would almost turn over like a dying battery, so I pulled the battery went to the auto place they tested it and said the battery was fine (I had just recharged it like 5 days earlier). Checked the plug, fine. Checked gas, fine. No clogged gas line. No loose wires, no bare wires, no cracked wires. Started scratching my head so I called BCE, they recommended a couple of things to try.

One was to try to start it and reset the hot water. The other thing they said is that sometimes the pulley doesn’t align and you have to manually turn it. That didn’t let it start so I pulled the fuse and it was corroded. That is supposed to be a watertight thing or water resistant thing. Anywho, for a couple of bucks I have a couple in my box on my trailer now. Without looking is was a standard car fuse I think you get a pack for like $5 or something.

Tell me about it.

Mine was shipped bolted down on a pallet with very small (thin) bolts. I don’t care what grade they were, they were too tiny for my comfort. A couple were actually bent. I bolted mine down on my trailer using plates and bars across several boards. My advice, and worth everything you paid for it, paint the plates/bars/whatever metal you choose before installing. I used a galvanizing primer, sure it is going to rust anyway, but it won’t for a lot longer. I also used coated bolts, nuts, and washers. Oh yeah, I didn’t get a stainless one I got the powder coated to save some dollars, there is already some light surface rust on it in less than 9 months. It sits outside and it is an open trailer, so it is to be expected. I do rinse down my trailer from time to time to get the crap off it. I like it enough, but hindsight being 20/20 I probably could have went with a 6gpm. I don’t do enough stuff to warrant the 8 and it tends to flood areas pretty quickly. Then again, I’m just a padawan sprayer.