Having trouble getting SH

So I own a window cleaning business and I started offering house washing and eventually want to offer roof cleaning. (I might want to drop window cleaning) So I started shopping for SH and I’m having issues I called a few chemical companies I found online, they won’t sell to me bc I’m a small business and I operate out of my house. So I contacted my local pool store. They sell individual gallon jugs for $7.00 a gallon, they said they could get me 5 gallon buckets or 15 gallon pails. 15 gallons will cost me $60.00 plus $35.00 fee so 15 gallons will cost me a total of $95.00. They also said if I order 15 gallons or more there corporate company will get red flagged and will have to inform the FBI so he said it shouldn’t be a huge deal but the FBI would be looking into it and most likely be calling me. So not only do there prices seem high, but I don’t really feel like getting a visit/ call from the FBI. Has anyone gone threw this ? Does anyone have any other sources for me to get SH I live in CT

What a load of crap…

FBI ain’t gonna call you for buying 15 gallons of SH.

The fee is probably a deposit on the container. You pay it one time. When empty to trade it in the next time you get another 15. You true SH cost at 15 gal is $4/gal. Still high.

Can you just use straight up clorox bleach?

You laugh about the FBI, but he lives in CT. Rules are brutal up there, who knows what the laws are.

Agree about Clorox though, worst case scenario just but a bunch of 6% gallon jugs at the store and work with that.

Yeah I can get Clorox. For that matter if I’m gonna go that route, I can buy a bunch of gallon jugs from the pool store. I can buy 5-10 one gallon jugs at a time. It’s just going to be so expensive they charge $7:00 a gallon. That’s why I was looking into bulk because it will save me some money. Gallon jugs will be fine for house washing but what about roof cleaning? If you do two roofs a day you may go threw 40-50 gallons on bleach its unpractical to buy 50 one gallon jugs or am I looking at this wrong way?

If you do two roofs a day you may go threw 40-50 gallons on bleach its unpractical to buy 50 one gallon jugs or am I looking at this wrong way?

I but the 12% as I need it for roof cleaning. For everything else… 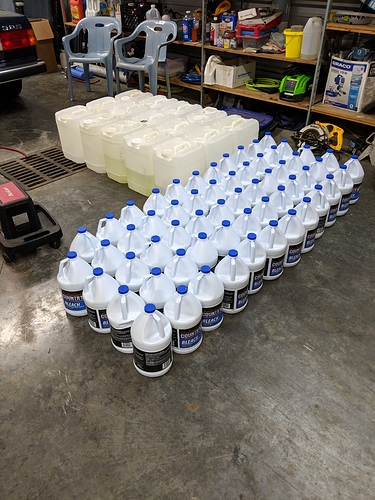 Pick a third of ‘em up, fill up the truck, now there’s 39 bottles of bleach on the floor!

Hahaha, well, it takes on a little different look after we’re done. That’s why we call it bleach day. Everything gets put into the fives, and loaded in the truck each morning based on the number of jobs we have for the day. 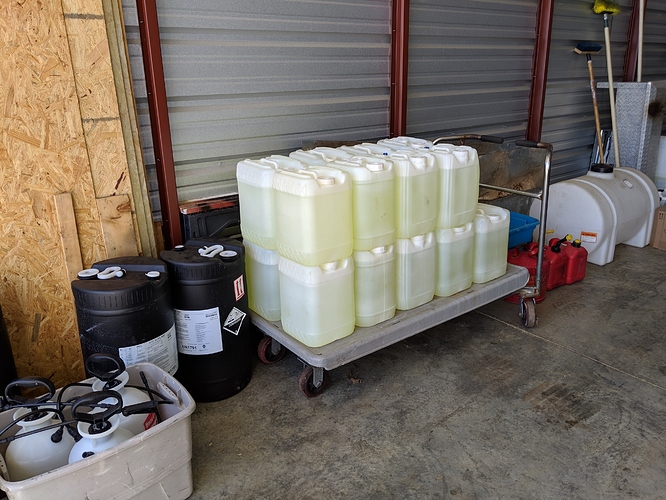 Just FYI - FBI is federal not state, so it makes no difference about what state he lives in. If the federal gov was worried about SH purchases of 15 gal or more, we would all be screwed.

All of those gallon jugs what percent SH is that? I called an a Different pool store today to talk to them ( same company different location) they said it’s not a big deal but there company has to report large orders of SH to homeland security. So not sure what I’m going to do. If you get your stuff from a pool store you might want to ask them if they do this also.

I can only report what my manufacture rep said to me -

If you are getting over 1000 gallons then their is another step in the process.

Made is sound like it is regular and no big deal. A simple form and signature.

You have nothing to worry about when it comes to the Fed’s. They could care less about what you do with some bleach. Those are blanket regulations that apply to alot of chems and mostly the are just looking for people who are cooking meth or something like that. Don’t worry about it. $7 is expensive for 1 gal so I’d try and find it cheaper but as far as legality goes you’re in the clear. I think it’s odd that they would Even mention that to you. My local pool store loves me. They give me a discount because I make “large” purchases. They charge about $3/ gallon and depending on the time of year sometimes it mskes more sense to just buy through them. Also some chem dealers will deliver to a residential address. Mine does. Maybe try another place. Most big cities/ counties will have a few options. Also you can try offering to pick it up and they can just fill your tank.

I’m getting 10-15 drums(15gal) delivered to my home for no delivery fee. 2.50 a gallon. Found a maritime company that also sells SH. One of their employees live near me. Drops it off on the way home. I called several of the big suppliers that said they only sell by the tanker. Out of options I called them back and asked to be referred to one of their customers.

My neighbor made a funny comment the other day that he was worried the drums would explode in the heat. Smh nosey old guy. They don’t stay there long, hopefully he doesn’t cause any ruckus

Well bleach doesn’t explode and its not even combustible so no meed to worry about that. Maybe ask him if he’s concerned about the bleach in his laundry room because it’s the same thing. I had a similar issue with my land Lord but I had multiple 50 gal drums in my back yard and he’s a fire Marshall. He was concerned about the legality. I told him that as far as I know theres no fire marshalls coming to do inspections on the property so I’m not worried about it. He laughed, I resigned my lease and life is good. Some peoole have nothing better to do. Especially the old retired guy who did thisbor that " for 40 years." No offense intended to the old retired guys who did “this or that” for the last 40 year’s.