Been really thinking about getting a generator for the house. I have a little Honda 2000 that is awesome and handy, but its not enough for running both refrigerators and select rooms in the house for window unit ac, overhead lights and ceiling fans. I dont need whole house, so not worried about a huge generator. We lost power two days in the last storm and it was awful how much we had to throw away.

We typically only lose power for a few hours if it goes out, maybe 5-6 hours at longest until this last storm.

Id rather spend the money to get a Honda and have faith that itll last a while. Anybody have any input?

This is the one i am thinking about. 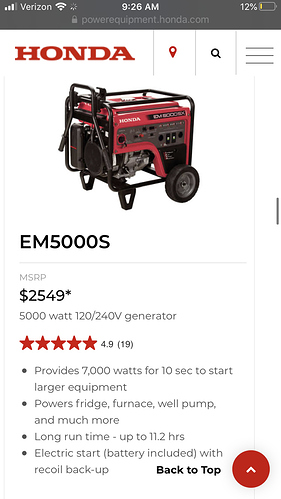 If you only plan to use it at the house and, with the price of that Honda, I would consider a Generac home generator. I see them all over the place around here. I’m not saying to order from Northern Tool but it was the first website that came up. You don’t have to do anything when the power goes out. It automatically kicks on. Most run on natural gas or propane.

I got a quote for home standby genny for the house, 13kw installed and blah blah blah. $9300.

Could go smaller if didnt wanna run 3 Ton AC i guess but smaller one would still be in $4-5k range. $300 year service. Warranty was good though, 7 yr parts and labor.

If you don’t want to pony up for the standby generator, you could get two of the Honda EU2000/2200’s and parallel them together, or two of the EU3000’s together and you’d be set. If going with 3000’s I wouldn’t consider the Handi model, just go straight for the iS models.

If you don’t need the ultra quiet versions, the the Honda EM, EG series are nice.

We had a really bad ice storm winter of 2008, just as we moved in to the house. 7 days without power, some people in SE KY were 2-3 weeks. Soon as I got a job here we bought a (crappy) generator off Amazon and haven’t used it since. Go figure.

One thing I will point out is risk of theft. Dirtbags will steal that thing right out from under you given the chance. Chain it down really good.

I’ve fantasized about a backup generator that would work off of a car for quite awhile. Not in the way that a lot of people have tapped into the electrical system. I mean, one that would be powered off the wheels.

Imagine a dynamometer hooked up to a generator head. Drive onto the contraption, strap the car down, get the wheels up to an appropriate speed, and set the cruise.

Just think about the kind of power output that would be capable of.

We had a really bad ice storm winter of 2008

I remember that one. My in-laws live in Eddyville and own about 40 acres. Most of the trees are Hickory and White Oak. I can’t even begin to tell you how many tops of trees and branches he lost. We went down to help but could really only do so much. Mainly ground clean up and lower branches. He ended up having to hire a arborist who could climb to trim and top a lot of the trees. Most of the trees are spread out to where they mow around them. Near the pond, barn, horse pasture, etc. Talk about spending some money on tree trimming. You guys got nailed by that storm. They moved down there to get away from the harsh winters of IL but the risk of ice storms is much higher there. They need to go about another 200 miles south. They’re actually considering moving to Eastern Ky to be near their other daughter. I doubt they will though. They’ve been in their current house for 30 years.

We got caught up in that sub-prime loan scandal back in Virginia and lost pretty much everything financially. Our first job here in Louisville was picking up dead limbs on the grounds of a Baptist college. $7.85/hr but it was kinda fun to be honest. Run around all day in those John Deere Gators.

They estimated about 75% of the trees had some degree of damage. We heard chainsaws for weeks.

I put a manual transfer switch on my panel box and have a 20 year old Honda 7500w generator to run the house. No matter what generator you get, run in under a heavy load a couple hours every 6 months or the magnets will go bad

There are several manufacturers of gas and diesel powered generators in the U.S. I bought a 10K WINCO, not cheap, but not cheaply made either. Just keep in mind most generators list their peak output, not regular draw, that is the number to focus on. Also, there are numerous generator calculators out there so you can determine what you want to run and what you need to purchase to make it run.

I don’t care if you get gas, diesel, propane, or natural gas, just make sure to put that switch on your box so you don’t injure a lineman when he/she is trying to restore power. Oh yeah, do periodic generator tests. I run mine every month or so for a little while, then kill it. Put some fuel stabilizer in there too if using gas/diesel.