I washed a house last week and the home owner ask if there was anything that could be done to the lines running down the underneath the windows. I told them that those lines couldn’t be cleaned and that they would have to paint.
Just wanted to check and see if anyone on here knows of a way to remove those lines or if I was correct by telling them they would have to paint. 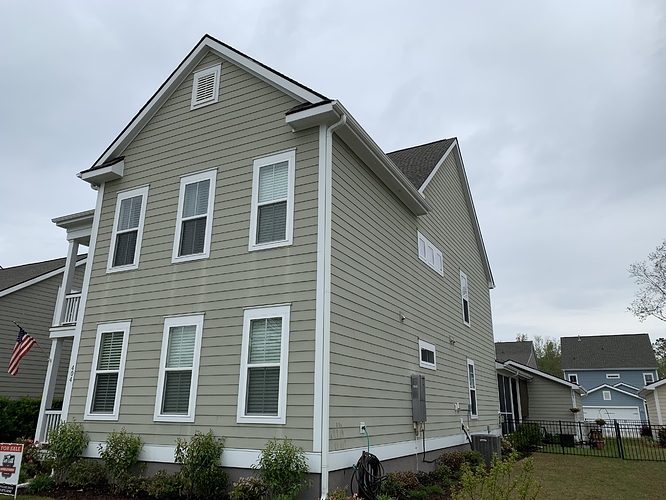 Thanks for the reply. I’ve seen it a few times on Hardiplank siding homes and didn’t know if it was something that could be removed without making it look worse than it already does.

Nothing will remove those stains from hardy board without damage.

Any attempt will only fad the paint and the surrounding areas more.

Set expectations from the beginning with things like this.

Did you even try just rubbing it with rag or anything?

No I didn’t. While I was there I thought it was an issue with the actual paint on the siding but now I’m second guessing myself and wondering if it was a run on top of the siding.

I checked out some of the other houses in the neighborhood as I was leaving and noticed the same marks on several of them also. Most of them were not as bad as the house in the photo but the majority of the houses had some streaking under the windows. The house in the picture gets a ton of sun on the front of it.

Its a combo of weep hole runoff and oxidized window framing.

Wipe your fingers on the framing and check it out.

If you start touching that siding your opening up can can of worms you might not be able to close.

Its painted cement fiber board, and its one of the worst colors for aging ect.

That siding will mark with even a finger swipe.

Your there to general clean their house, not restore stained or faded paint.

Set expectations from the start and you wont have to worry.

I told them from the beginning that it wasn’t going to come off during the house wash and they were satisfied. They are going to look into having it repainted since they’re trying to sell it. I just wanted to make sure that I wasn’t giving them bad info by telling them it wouldn’t come off.
I appreciate the info though, I’m going to leave it alone.