Who has done business with Powerwash.com. It’s the one owned by Robert and Michael Hinderliter. I know they’ve been around forever but have never heard anything good or bad about their hot water units. They have some kind of clutch system

The Beckett burner is good. I would avoid the rest of the system and the vendor

That’s what I thought I remembered. It’s been years since I’ve heard that name. I stumbled across their website earlier today. Here’s my dilemma, I’m going to have x amount to get started with probably in about 6 weeks. I’ve owned 2 landas in the past. They were good machines but nothing spectacular. My local rep wants $7200 for a 4.8@3500 which seems way out of line to me. I can buy a hydrotek 7.8@3000 for around $7300 or a Pressurepro 8@3500 with the block mounted k7 unloaded for around $6300. I’ve never ran hydrotek or pressurepro. My landa dealer also carries pressurepro and wants right at 8500 for the same unit that I just described. His attitude on warranty work is if the unit is bought online and not from him you go to the back of the line and he’ll get to it when he doesn’t have any other customers waiting. I have a mechanical background army and civilian heavy trucks and equipment so with a little guidance I’m sure I can figure things out. The pressurepro looks fairly open and easy to access. I would like to hear from people that have owned these machines. I’ve read a lot of mixed reviews about pressurepro and wondering if the hydrotek is worth $1000 more. This is a hot water unit. As business grows I’m adding a soft wash system (probably the bandit from Bob) an 8@3500 cold water unit as a back up/residential unit and sirrocco reclaim. I’m not a newbie. I’ve done this before. I started in the 80s Russ Spence and myself started about the same time in the same small town then joined the army. Got back into it about 10 years ago but was offered a position with department of defense as a mechanic with insurance after my wife lost her job now I’m in a position where my cost of living is low enough to where I can start back up and not be so stressed. Any info is greatly appreciated.

Russ Spence rocks. Any equipment you buy is going to be similiar. It boils down to who do you want to support and the quality of equipment you can afford. If you have been around that long you know which vendors have hurt the industry and which haven’t. General pumps aren’t great but you will be comparing apples to apples with all skids except Landa. Landa will have a much better pump.

I agree. I rented a landa a few weeks ago and just can’t see 7200 for 4.8@3500. I haven’t seen Russ in years. I keep up with him some on Facebook as I do with most of our friends from Selma. He was just getting off the ground when i left to join the army. I’m sure he got a lot of my contracts. Russ was always a good guy. The pressurepro I looked at was with pwp but I understand they burned a lot of contractors. That’s coming from a good friend who has always shot it straight. I’m sure I can get the same machine elsewhere for the same price. The hydrotek and the pressurepro both have Honda’s and General pumps. The difference may be in the coils. I believe they both have the same burners. The pressurepro is 12volt while the hydrotek is generator. Would the 12v be simpler to troubleshoot and repair? 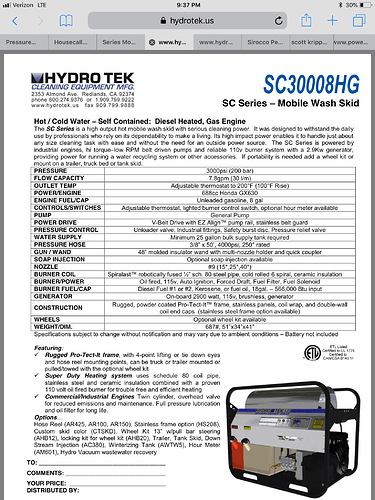 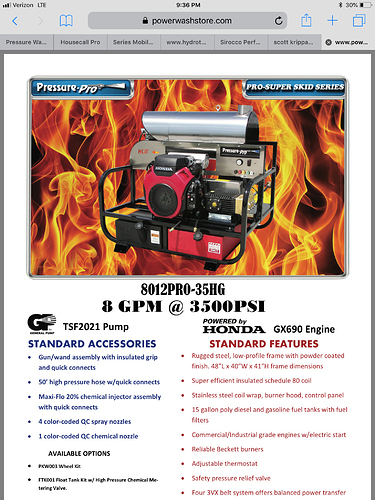 I’m running the hydrotek 7.7@3500 with the Honda gx 690. Only complaint is that the fuel tank is too small. Can only run for about 5 hours straight. Definitely will have to get a bigger fuel tank if you plan on running it all day.

I recently purchased a 8gpm unit from Powerwash.com. PW.com is located in Fort Worth TX and I am in Dallas TX so I could easily go pick up the trailer. I did price a Landa build and as most have commented the price was substantially higher than all other competitors.

As far as my experience with PW.com it has been a mixed bag. The build took awhile, but they threw in a model with a clutch at no additional charge to make up for the delay. The delay I can understand it’s a busy time for everyone, but they did not go over anything with me as far as the unit is concerned. I just found the owners manual sandwiched between the fuel tanks. Lucky I have a mechanical background and with the help of google and youtube I was able to figure out most of everything I needed. Overall they are an online distributor and function as such.

As far as the actual unit it’s just fine. PW.com like a lot of distributors do not really make their own units which is a good thing. What I mean is it’s a Becket burner, Briggs motor, and a general pump.

I will continue to order supplies from PW.com, but will probably not order anything that requires an onsite visit.