I took this picture from Micha Kommers. Now the question is How do we stop it? The lines in concrete cleaning. I know I have better success in cleaning smaller areas at a time such as a 15x15 pad on a driveway or a small stretch then coming back and rinsing it. But sometimes the lines still appear (not as bad as this). I know Michael did a great video one time about lines and surface cleaners but I can’t find it. Any tips and tricks.

I would love to know this as well! I only did one walkway for a customer to try out the surface cleaner and I was scratching my head as to why it left those lines. This was my first time using a SC so I am not sure if it is the technique or if I don’t have a right setup. The SC is the Classic from Bob and my pressure washer is a 4gpm/4000psi. Not sure if this is the right combo.

Here’s a pic of the walkway I did, you can see those lines in foreground. 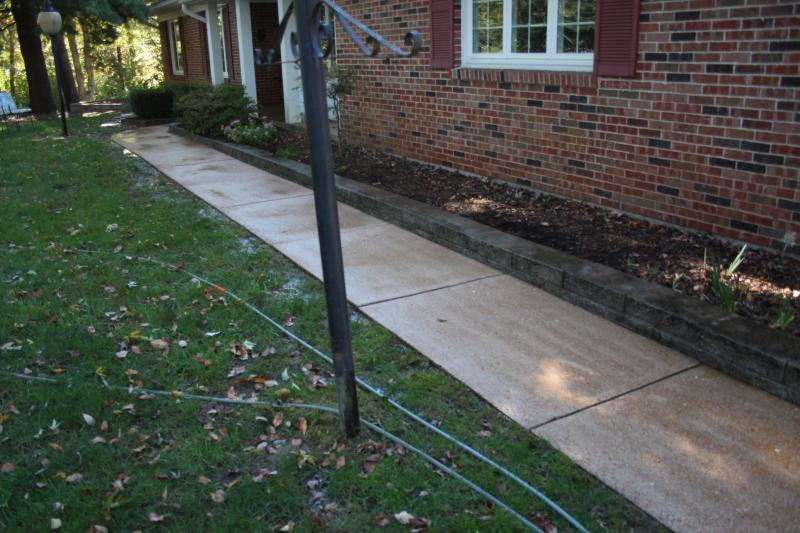 This is a similar conversation where having on another bb. The first picture the lines are overlap marks from the spray tips doing twice the amount of cleaning when you go from one path to the next one. The person who did that does have the cleaning paths pretty straight as those lines show.
The easiest fix there is changing out the tips…and that’s not always and easy fix but it’s the best way to start. Years of doing concrete you get more use to what concrete is soft and what is hard. After awhile you can look at most concrete driveways or commercial walkways and just pretty much tell which one would cause some type of problem like what the first picture shows in this thread.

So try larger tips and you may also have to change the spray pattern as well from maybe a 15 degree nozzle to a 25 degree nozzle and even a 40 degree nozzle could be considered. The problem there with commercial work is when you pop the gum where those parts may look cleaner and now you have a walkway with all bright spots in it.

What I think may ultimately solve those type problems a little more is to bring the surface machines into the 21st century and get them as light as a 24" or so lawn mower that’s self propelled and the spray bar is being spun by a belt or direct drive and the tips are pointed straight down where the cleaning might be more even… This is just speculation and doesn’t answer the questions here.

So try the tips, play with the heat with maybe less pressure and lastly consider on some of the residential driveways at least to use a house type cleaning soap mixture stepped up a few notches to see if you can clean and brighten with out to much pressure but more pressure then the typical soft wash…

The second picture I can’t tell why there are so many overlap lines it looks like from my I-pad. Maybe later on my laptop I can see the picture better because it would be much larger.

What John T said. Check the tip size for the first picture.

The second picture, how many times did you go over it? For resi work you have more options, it looks like a tip issue too but you can pre spray some house wash mix on it, and since it’s a smaller area move the surface cleaner around, you don’t need to do straight lines.

This is a similar conversation where having on another bb.

Yes this was the same advice I gave over there. My advice was termed as “cheating” and “nothing more than a rinse job” by your Buddy. Why didn’t you back up my advice over there John? I mean no biggie just wondering.

Yes this was the same advice I gave over there. My advice was termed as “cheating” and “nothing more than a rinse job” by your Buddy. Why didn’t you back up my advice over there John? I mean no biggie just wondering.

Hey Guy-- I called Jim to talk about his 0 degree cleaning when apparently during our conversation you must have responded to his post because it wasn’t there when I called him and it was there before I got off.

I get Jim when I know some bb guys don’t. He’s in the parking garage cleaning frame of mind 24-7. He gets the money he charges because of the way he operates. He looks at some things as cutting corners so his way of doing things is to find a way to keep the speed up and still get the same results.

Sometimes I think you know where he’s coming from because you have been around for awhile whereas some others don’t realize Jim is completely all about parking garage cleaning and they look at his way of posting as he doesn’t know what he’s talking about. Jim’s biggest weakness is the bulletin boards and how he responds.

In person and on the phone he is knowledge peddle to the metal on parking garage cleaning so I gravitate to guys like him to learn about what he knows and to share the little I know.

Jim is a good guy who really does try to help others and he actually listens when you talk to him.

I also did say there that what you do on residential concrete cleaning is exactly the same thing we do. Your also much better with posting on the bb’s then Jim is which is his weakness. There probably isn’t to many people Guy who can teach you much about residential and some commercial cleaning that you don’t already know but when it comes to garage cleaning and the technical end of that I haven’t spoken to anyone anywhere who knows the exacts like Jim does.

So if it makes you feel Better…yes your answer was more towards what the thread starter in there was looking for and my answer was similar to yours and we both do residential so what else did you want me to say in there??

What John T said. Check the tip size for the first picture.

The second picture, how many times did you go over it? For resi work you have more options, it looks like a tip issue too but you can pre spray some house wash mix on it, and since it’s a smaller area move the surface cleaner around, you don’t need to do straight lines.

John (both of you), this was my very first time using a surface cleaner and only time. I did this one for free for my client, was doing a house wash and asked if I could try out my new equipment on her walkway. She was extremely happy since it was almost black before and of course I did it for free.

I did put down some HW mix and then went over it with a SC (Whisper Wash Classic from Bob). Like I said this was my very first time using a SC so I didn’t know what I was doing besides trying to replicate what I’ve seen on YouTube videos.

So you guys are saying this could be due to tips that are on the SC? I’m thinking if I went side to side on that walkway same thing would have happened.

I am running a 4gpm/4000psi machine, could it have something to do with that, maybe I need a higher gpm machine?

It’s like riding a bike, the more you do it the better you get.

Walking speed, degree of tips & orifice size play into this. You went over that sidewalk overlapping several times, I count at least 8 stripes on the sidewalk. When a sidewalk is black or very moldy I like to spray it with a roof strength mix, wash the house then clean the concrete. In a case like yours, I would have relied more on chem than machine.

Notice my helper in this picture, he is staying very close to the the clean line with very little overlapping. 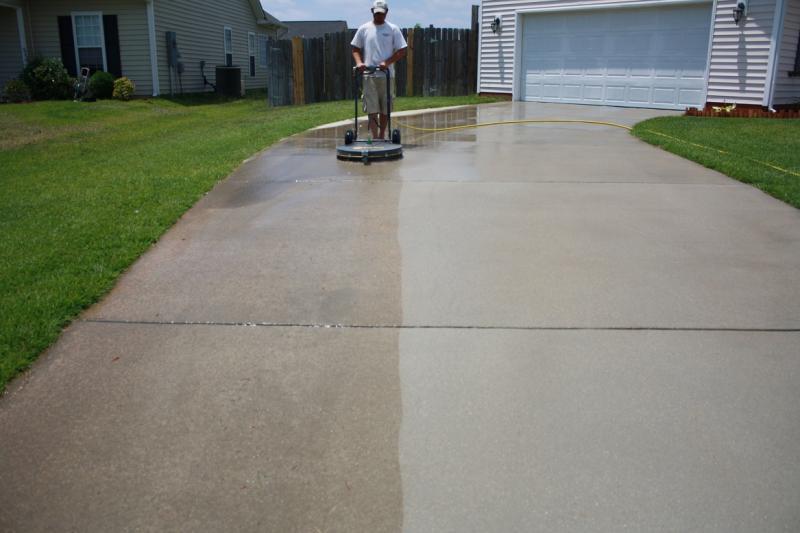